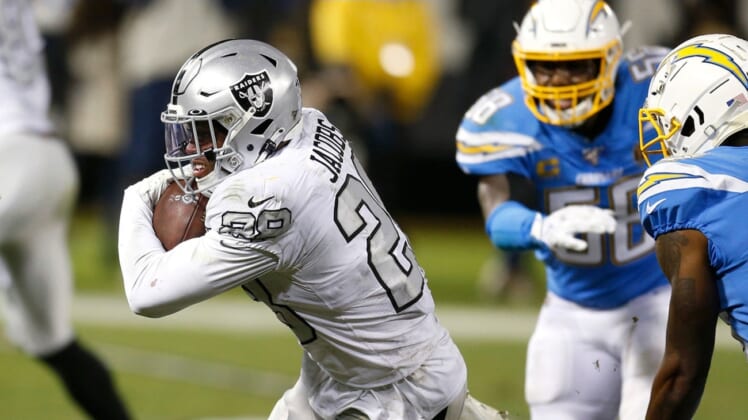 Sr. NFL Columnist Moe Moton talks Oakland’s big win over Los Angeles and what it means for their playoff chances and their future.

In the process of winning games, the route to victory never looks the same— some people may say there are “ugly” wins. The Oakland Raiders’ 26-24 victory over the Los Angeles Chargers fits the description.

Referees flagged defensive ends Clelin Ferrell and Maxx Crosby multiple times for lining up in the neutral zone. The run defense gave up 146 yards—the second-highest total in a single game all season. The offense didn’t score until quarterback Derek Carr connected with fullback Alec Ingold on a nine-yard play with 21 seconds left in the first half.

Even the special teams unit had a major gaffe. Kicker Daniel Carlson missed an extra point and left the door open for the Chargers, who trailed by two points with one minute and two seconds left in regulation.

Yet, the Silver and Black topped the Chargers in a high-stakes division matchup.

How did Oakland pull out the victory?

For starters, they won the turnover battle and didn’t give the Chargers any extra possessions. Secondly, safety Erik Harris had a career day, logging two interceptions—one returned for a touchdown. He secured a third, but an offsides penalty on Crosby erased the play.

With wins over the Indianapolis Colts (5-3), who currently hold one of the AFC wild-card spots, and a head-to-head victory over the Chargers, the Raiders have positioned themselves to compete for a postseason berth late in the year.

Safety Karl Joseph would’ve had a second interception if not for a pass interference call on rookie cornerback Trayvon Mullen.

Overall, the Raiders racked up 12 penalties for 97 yards. However, with the game up for grabs, quarterback Derek Carr moved the ball downfield with quick strikes to running back Jalen Richard and wideout Hunter Renfrow. Rookie tailback Josh Jacobs delivered the knockout blow on an 18-yard touchdown run to put the Raiders in the lead 26-24.

Head coach Jon Gruden did a victory lap around the Oakland Coliseum for its last night game before the team moves to Las Vegas. During the broadcast, Joe Buck and Troy Aikman commented on the energy at the stadium.

Raiders fans can celebrate another nail-biting victory, which propels the team to 5-4, but they have something to look forward to in the second half of the season—meaningful games with playoff implications.

With wins over the Indianapolis Colts (5-3), who currently hold one of the AFC wild-card spots, and a head-to-head victory over the Chargers, the Raiders have positioned themselves to compete for a postseason berth late in the year.

No opponent provides a guaranteed victory, but the Raiders should feel good about seeing the winless Cincinnati Bengals (0-8) and one-win New York jets (1-7) next up on the schedule. Staring at a potential 7-4 record, the Raiders are squarely on the postseason radar.

At the beginning of the season, Oakland tied for the seventh-youngest roster while in a rebuilding period. Carr lost his No. 1 wide receiver Antonio Brown during the offseason. The league suspended defensive coordinator Paul Guenther’s field general in linebacker Vontaze Burfict after Week 4. Yet, the team continues to battle and win games against solid competition.

Despite fielding a young roster that’s prone to mistakes with penalties and blown coverages, the Raiders continue to find ways to win, which is the mark of a playoff-level squad.

…if the season ended today, Oakland wouldn’t qualify for the playoffs. The Buffalo Bills (6-2) and Colts (5-3) still control their own destinies.

Of course, this team will have missteps in the coming games—that comes with growth. During his postgame interview, Carr said that he tells the younger guys in the locker room to “pump their brakes.” As a sixth-year veteran, he understands it’s a long season:

With seven more games to go, the Raiders still have a lot of work to do. Gruden must emphasize the need to clean up costly penalties. Linebackers and cornerbacks have to build their rapport on the back end to cover blind spots in the middle of the field. Ferrell has to push forward after his best game as a pass-rusher, logging 2.5 sacks.

More importantly, if the season ended today, Oakland wouldn’t qualify for the playoffs. The Buffalo Bills (6-2) and Colts (5-3) still control their own destinies.

The Raiders have to focus on stacking up victories. They still have three division games left and two contests with the Tennessee Titans (4-5) and Jacksonville Jaguars (4-5). Both AFC South clubs are still viable and in the running for wild-card spots.

Even with the mistakes made in past games, the Raiders have shown enough poise and progression with a good touch of resilience to finish the season on a strong note.

We’re beginning to see more flashes from Ferrell. Crosby put immense pressure on Chargers quarterback Philip Rivers Thursday, registering a half-sack with three quarterback hits. If Mullen can cut down on penalties, he’s displayed promising traits of a starting cornerback. Renfrow has emerged as a clutch performer on crucial downs, which isn’t a surprise if you watched him at Clemson.

We must acknowledge, Oakland has little star power. Not only does the coaching staff have a bunch of rookies on the rise, unheralded veterans are also playing a huge part in victories. Carr’s name doesn’t even pop up on the top-10 quarterback list. Yet he has the most fourth-quarter comebacks through a player’s first six seasons:

Harris looks like the coverage safety the defense needs on the back end. Richard has become a closer in the last two games. Defensive end Benson Mayowa leads the team in sacks with seven.

Despite the unfamiliar names, inexperience and hesitance to praise Carr’s recent performances, the sum of the roster’s parts has been better than the opponent more times than not. In the ultimate team sport, the Raiders have a group of unselfish grinders with a short memory for bad plays and never-give-up attitudes that open the door for postseason aspirations.