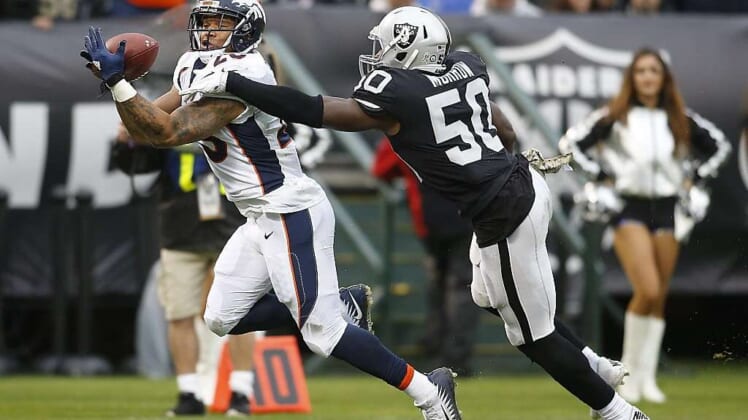 The loss of veteran linebacker Vontaze Burfict for the Oakland Raiders is potentially devastating if his suspension is upheld by the NFL. The games must go on so who could step in his place?

Apparently, the league, specifically NFL vice president of football operations Jon Runyan, thought Burfict had too many slaps on the wrist. His 14th violation became the tipping point.

In Week 4, Burfict led with his helmet on a tackle, tight end Jack Doyle popped up after the hit without any sign of lingering effects. The officials flagged the Raiders linebacker, which was the right call, and decided to eject him as well.

Burfict will appeal the suspension. Because he’s the first to grapple with a ban of this length for an on-field hit, there’s a good chance the league reduces this suspension to multiple games rather than the remainder of the season:

Despite good evidence, the punishment might not fit the crime. Yet the eight-year veteran has a long history of transgressions, which may work against him in this particular case.

For now, the Raiders have to move on. They know Burfict won’t take the field in London, although he traveled with the team. What can the coaching staff do to compensate for his absence, and who’s going to see increased roles?

Tahir Whitehead: Man in the Middle

We’ll see Whitehead back in that spot Sunday, and he’s confident in himself as the man in the middle. He talked to reporters about the familiar role Wednesday.

Whitehead has played well moving toward the line of scrimmage to stop the run. He leads the team in total tackles (24) with three for loss. However, opposing quarterbacks may target him with running backs and tight ends.

“I feel extremely confident,” Whitehead said. “It was something I had to do last year, It’s something I’ve had to do pretty much my whole career, having the green dot and making sure I get everyone lined up, getting the checks and the calls and everything, so there’s no added stress. I’m comfortable doing that and getting the calls executed.”

Fortunately for the Raiders, Whitehead can play all three linebacker positions. As he shifts inside, the 29-year-old will have to cover more ground and serve as a sideline-to-sideline defender.

Whitehead has played well moving toward the line of scrimmage to stop the run. He leads the team in total tackles (24) with three for loss. However, opposing quarterbacks may target him with running backs and tight ends.

According to Pro Football Focus, Whitehead allowed seven receptions for 103 yards and a touchdown. He brings experience, physicality and vision in the middle of the defense, but the eighth-year veteran may find himself in disadvantageous situations on passing downs in open space.

Among the Raiders linebackers, Nicholas Morrow seems most equipped to handle pass coverage duties. As a former safety at Greenville, he has some experience reading passes as an off-ball defender.

The Bears’ 29th-ranked passing attack shouldn’t put much fear into the Raiders defenders. However, play-caller Paul Guenther must respect a quick-twitch athlete like running back Tarik Cohen as a pass-catcher out of the backfield, tight end Trey Burton in the seam areas as well as wide receivers Allen Robinson II and Anthony Miller

Looking ahead, expect Morrow’s defensive snap count to increase from 49.46 percent closer to 65 percent. Keep in mind, Marquel Lee is on injured reserve with an ankle injury.

In the past, Morrow had missteps in taking the right lane for stops on short passes and struggled to disengage from blocks to make tackles. Nonetheless, he’s shown flashes, breaking into the backfield and deflecting pass targets on shallow pass routes.

Morrow put together a solid outing against the Colts. He leveled running back Marlon Mack on a tackle behind the line of scrimmage, which resulted in a one-yard loss. He also broke up a pass intended for wide receiver Chester Rogers down the stretch and finished with six solo takedowns.

In the past, Morrow had missteps in taking the right lane for stops on short passes and struggled to disengage from blocks to make tackles. Nonetheless, he’s shown flashes, breaking into the backfield and deflecting pass targets on shallow pass routes.

In Week 4, the Raiders allowed seven catches for 50 yards to Colts running backs Nyheim Hines and Jordan Wilkins. Tight ends Jack Doyle and Eric Ebron combined for five catches, 70 yards and two touchdowns, though, the latter dropped multiple passes and scored with his team trailing by 14 points with a little more than a minute left in the game.

Dakota Allen is more than just a Last Chance U. alumnus. He completed his redemption story at Texas Tech.

In 2016, Allen was arrested for home burglary and theft—those charges were dropped. The school dismissed him, and the linebacker enrolled in East Mississippi Community College for one term.

In 2017, Texas Tech allowed Allen to return, and he made the most of his second chance on the field and as a model example for the Red Raiders defense. As a team captain, the talented defender became a playmaker, logging 101 tackles, six for loss, two sacks, two interceptions and four pass breakups during his junior team.

The Rams selected Allen in the seventh round of this year’s draft, but he didn’t make it through final cuts. In preseason action, the rookie logged 12 stops and allowed 10 receptions out of 15 targets for 65 yards with a pass breakup, per Pro Football Focus.

At 6’1″, 232 pounds, Allen has enough quickness and size to handle short-area coverage responsibilities with more experience, but he’s unlikely to see the field on defense for ample snaps right away. The Texas Tech product will need to prove his worth on special teams before taking on a consistent role at linebacker. On a small scale, he can pop in on early run downs. Undrafted rookie Justin Phillips also fits into this category.

In today’s NFL, teams are comfortable with two linebackers and an extra defensive back on the field in their nickel alignments. Through four weeks, only Whitehead and Burfict played more than 50 percent of defensive snaps among Raiders linebackers.

With Morrow primed for a role increase, he and Whitehead will serve as the two primary second-level defenders. Don’t expect to see much of Kyle Wilber on defense. The 28-year-old is more of an asset on special teams, playing only 21 defensive snaps this year—two in the last game.

Against the Colts, five Raiders defensive backs played 97 or 100 percent of snaps on defense. That’s unlikely to change in Sunday’s game with the Bears—expect to see 4-2-5 setups with Lamarcus Joyner, Karl Joseph and Erik Harris rarely coming off the field in London.