Two-plus weeks into the 2018 college football season, questions abound. Rather than attacking the unknown, though, we’re focused on what’s been awesome.

Or, perhaps better stated, who has been awesome.

Several names are well-known, including a pair of potential top-three selections in the 2019 NFL draft. There’s also a few Heisman Trophy contenders on the list. But we’re looking beyond the most popular players, too.

Did you know Hawaii’s quarterback has 13 touchdowns and zero interceptions, or a Colorado receiver leads the country in yards per game? Those are the exact type of gems we want you to discover.

Two blowouts have limited Nick Bosa’s time on the field, but the touted NFL prospect has taken full advantage of those snaps. Only one player, Utah State’s Tipa Galeai, has more sacks than Bosa’s three. He tagged Rutgers for two and chipped in one against Rutgers, also making two other tackles for loss opposite the Big Ten foe. Bosa recovered two fumbles — including one in the end zone for a touchdown — during Ohio State’s opener, as well. Buckeyes fans need to enjoy Bosa’s remaining snaps, because there’s no sense in him returning to college next season.

LSU captured most of the headlines following its Week 1 beatdown of Miami, but Jonathan Garvin still had a respectable day. He gathered eight total stops with three tackles for loss in the 33-17 loss, adding one sack, one hurry and one pass breakup. Then in Week 2, the Hurricanes smoked Savannah State 77-0 with the help of Garvin and a dominant defensive effort. The sophomore once again notched eight tackles with three takedowns in the backfield. Garvin is fulfilling the expectation of a breakout season in his first month as a starter.

Widely considered a Heisman Trophy contender during the offseason, Will Grier has looked the part so far. On a neutral site against Tennessee to begin the year, he piled up 429 yards with five touchdowns and zero interceptions. West Virginia followed up that blowout and wrecked Youngstown State 52-17, led by Grier’s 332-yard day. The senior was 21-of-26 and tossed four touchdowns. His 76.7 completion percentage currently ranks fifth nationally, and his 380.5 yards per game is fourth. Grier has the Mountaineers positioned to contend in the Big 12.

Missouri has cruised to a pair of victories as easily as Emanuel Hall has sped past defenses. The wideout registered 171 yards in both triumphs over Tennessee-Martin and Wyoming, reeling in 10 passes against the latter. Of his 14 receptions to date, 12 have covered at least 10 yards. The only players with more such catches have already appeared in three games. Hall leads the nation with seven grabs of 20-plus yards and five of 30-plus, too. Missouri will soon be tested in a stretch that includes Georgia and Alabama, but Hall is thriving right now.

J.T. Barrett regularly put up gaudy numbers, but he was ineffective when Ohio State played tough defenses. Dwayne Haskins has provided legitimate hope that trend is changed — something he can prove opposite TCU in Week 3. Haskins threw for 313 yards and five touchdowns in his starting debut, a 77-31 demolition of Oregon State. Last Saturday, the sophomore picked apart Rutgers for 233 yards and four scores on a 20-of-23 clip. Haskins’ 79.2 completion percentage is No. 3 nationally. Thanks to him, Ohio State is reaffirming itself as the Big Ten favorite.

This explosion has basically come out of nowhere. At only 6.7 yards per attempt last season, Hawaii’s passing game ranked 92nd in the country. The Rainbow Warriors trudged to a 3-9 finish along the way. Fast-forward to 2018, and Cole McDonald has turned the aerial attack into a feared part of the offense. He’s racked up 1,165 yards and 13 touchdowns with a 70.3 completion percentage, helping Hawaii already match its win total from last season. Whether this torrid start will be sustained is questionable, but McDonald has been remarkable. 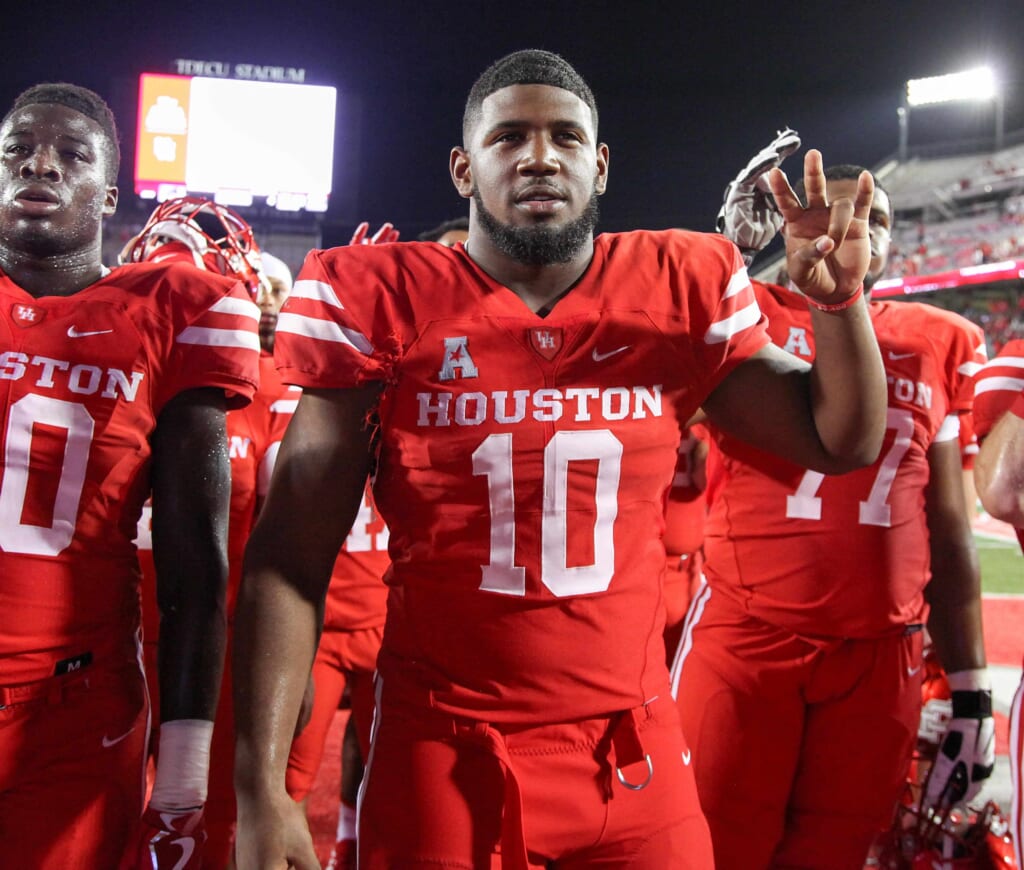 Though he didn’t officially record a sack against Khalil Tate and Arizona, Ed Oliver spent the entire game in the backfield. The NFL-bound defensive tackle officially posted four hurries but arguably had a couple more. He also chipped in a pass breakup and a half-tackle for loss, lifting the latter total to four on the season. Oliver made 3.5 stops in the backfield during the opener against Rice, which he shredded for 13 total tackles. The long story short? Oliver is a machine. Win or lose, he’s going to infuriate opposing linemen and coaches.

When Colorado faced a 28-27 deficit at Nebraska late in the fourth quarter, Laviska Shenault Jr. changed the game. The sophomore sped down the right sideline and hauled in a perfectly thrown pass from Steven Montez for a game-winning 40-yard score. That celebration wrapped a bow on Shenault’s 10-catch, 177-yard day — his worst performance of the young season. He ripped apart rival Colorado State for 11 receptions, 211 yards and a touchdown in Week 1. Even if it doesn’t last long, Shenault is the leading the country in yards per game at 194.

The quietest breakout star of 2017 has picked up where he left off. Sutton Smith led the FBS with 29.5 tackles for loss last season and has already tallied 5.5. Most impressively, he collected the takedowns against superior competition in Iowa and Utah. Smith registered a sack and a forced fumble at Iowa, and he thrived versus Utah. The junior notched 4.5 takedowns in the backfield with two sacks, helping NIU surrender only 17 points in a loss. The Huskies have some serious questions to answer on offense, but Smith remains a star on the defensive line.

Mississippi State put together a brilliant defensive effort on the road at Kansas State, holding the hosts to only 213 yards and 10 points. Montez Sweat played an integral role in that showing, recording two tackles for loss, one sack and one hurry while providing an even larger true impact. He was an all-around nuisance and earned SEC Defensive Lineman of the Week. Sweat began the campaign with six takedowns, 3.5 stops for loss and two sacks opposite Stephen F. Austin. He and defensive tackle Jeffery Simmons are playing up to expectation. 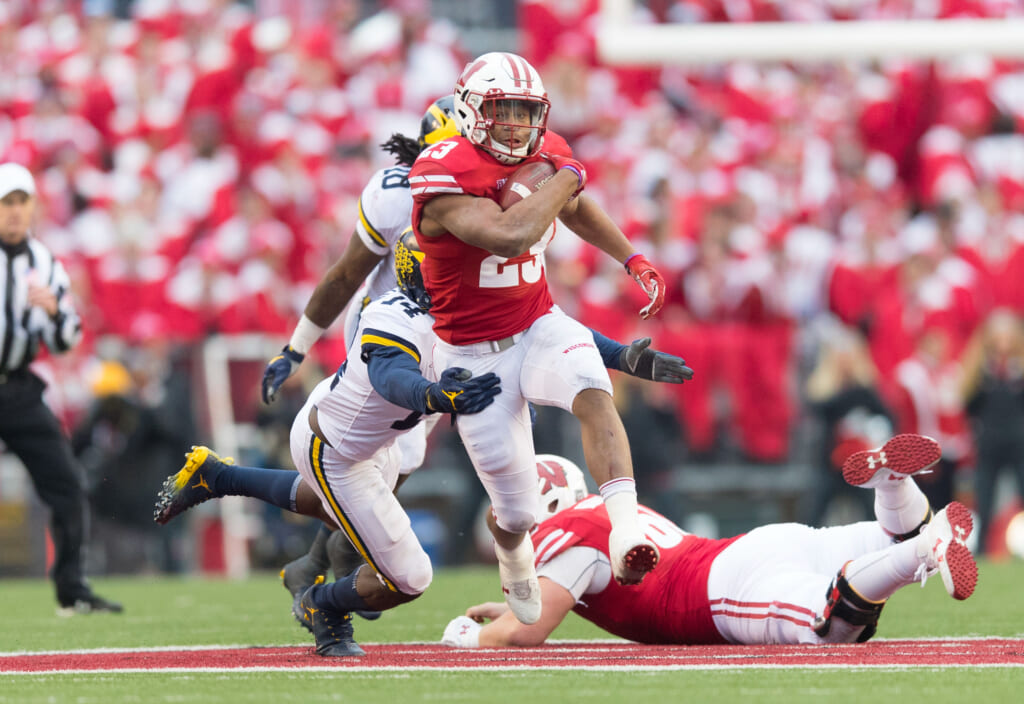 The nation’s leading rusher shouldn’t be a surprise. Jonathan Taylor racked up 1,977 yards as a freshman, and Wisconsin opened the campaign against Western Kentucky and New Mexico — not exactly the toughest slate. Nevertheless, he simply shredded both teams. Taylor sliced through WKU for 145 yards and two scores, then obliterated New Mexico for career-high marks of 253 yards and three touchdowns. The schedule gets much tougher with Iowa and Michigan over the next month, but Taylor gives the Badgers a reliable, high-ceiling runner.

High-pressure situations are no match for Tua Tagovailoa. Famous for leading Alabama’s comeback to win the national championship last season, the southpaw has opened the 2018 campaign about as hot as possible. Tagovailoa had 253 yards of total offense and accounted for three touchdowns in a 51-14 beatdown of Louisville. During a 57-7 rout against Arkansas State, he reached 248 total yards and four scores. Tagovailoa is also 10-of-10 for 207 yards with four touchdowns on third-down passes. When does the College Football Playoff start?