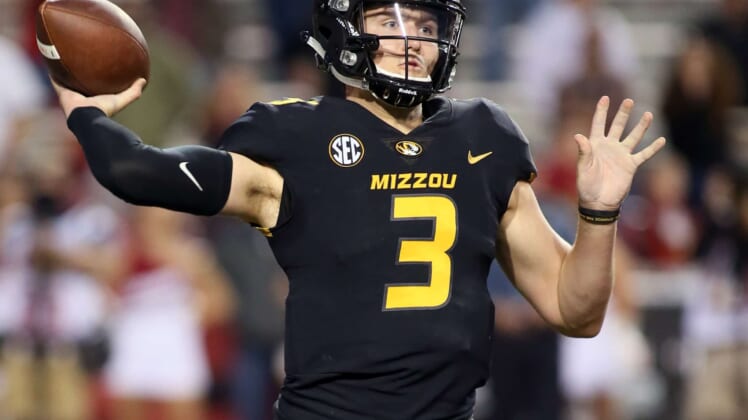 The college football season has been absolutely bonkers thus far, and there are no signs of a reprieve from that trend ahead of Week 7’s action.

While there are a few ranked matchups that are innately compelling, what makes a couple of those contests so highly anticipated is the clashes within between certain players.

Read on to find out what those more individualized battles are in this Week 7 edition of NCAA gridiron matchup breakdowns.

No. 6 West Virginia at Iowa State

Mountaineers star quarterback Will Grier had four turnovers in Week 6’s win over a 2-4 Kansas team. At least he’s tied for third nationally with 21 touchdown passes, making more than enough splash plays to compensate for the giveaways.

Considering Iowa State’s defense yields 7.74 yards per pass attempt, this could definitely turn into a shootout. The Cyclones may not be fully equipped to handle that, as star running back David Montgomery may be out of action.

A huge source of optimism lies in true freshman passer Brock Purdy. He came off the bench to rally Iowa State past Oklahoma State 48-42 last weekend, accounting for 402 yards of total offense.

Purdy good. He may have to be even better to take down Grier and West Virginia.

Florida and Mississippi State are the only teams other than Washington to have played six games and yield only three touchdown passes. Talk about a juicy matchup, because the Huskies are squaring off against Justin Herbert, the current QB1 front-runner for the 2019 NFL draft.

Herbert and his explosive Ducks offense don’t have the experience in big games or otherwise that Washington boasts, though. The Huskies have fourth-year starters to lean on for a difficult road trip to Eugene in signal-caller Jake Browning and tailback Myles Gaskin.

The last time Oregon faced a top-25 opponent at home was the Stanford game, where it collapsed to lose in overtime. Especially since Washington lost to Auburn in Week 1, this showdown has massive playoff implications.

Michigan State at No. 8 Penn State

After losing at home to Northwestern, the Spartans face further adversity in Happy Valley. These Big Ten adversaries need to course correct after tough losses. Penn State’s was a particularly crushing 27-26 defeat at the hands of Ohio State.

The Nittany Lions’ silver lining is they had a Week 6 bye and have had extra time to prepare for Michigan State. How Penn State senior quarterback Trace McSorley fares will largely determine the outcome of this one. He gashed the Buckeyes for 175 yards rushing, but must be more accurate as a passer than his mark of 52.9 percent.

McSorley and his high-powered ground attack faces a Spartans defense that yields 33.8 rushing yards per game and 1.32 yards per carry. Something’s got to give.

In 11 of 12 prior seasons, the Buffaloes have only one winning record. It’s jarring to see them back in the top 25, and that’s largely thanks to the play of signal-caller Steven Montez.

The junior passer has thrown 11 touchdowns to two interceptions in leading Colorado to a 5-0 mark. After road losses to Stanford and Texas, USC has righted the ship with a couple one-possession wins, no doubt building the confidence of true freshman quarterback JT Daniels.

Home-field advantage will aid the Trojans’ upset bid, as will a back seven featuring potential future pros in linebacker Cameron Smith, cornerback Iman Marshall and safety Marvell Tell III. They could be the difference in handing the Buffaloes their first loss.

No. 22 Texas A&M at South Carolina

The Aggies faced Clemson and Alabama within their first four games. When then-13th-ranked Kentucky visited College Station last week, Texas A&M pulled out an overtime win. Now it really looks like coach Jimbo Fisher can salvage a stellar maiden season at the helm.

South Carolina too has lost twice to quality foes. Week 6’s victory over Missouri was encouraging for a couple reasons.

One was the stellar defensive performance against Tigers quarterback Drew Lock. The other was Michael Scarnecchia, who threw three touchdowns and was turnover-free in place of third-year starter Jake Bentley, who nursed a knee injury.

Whether it’s Bentley or Scarnecchia under center, South Carolina has a chance to notch its first 2018 win over a top-25 opponent.

There’s plenty to like and watch for when Williams’ 13th-ranked LSU team takes on Baker and No. 2 Georgia. This matchup is going to be most fascinating to monitor, though.

These two won’t be lining up across from each other Saturday in Baton Rouge. However, they happen to be the absolute elite cornerback draft prospects for 2019.

Baker is bound to take half the field away from the Tigers, whose liability at quarterback was exposed in Week 6’s loss to Florida. Joe Burrow threw a late pick-six to dash any hopes of an LSU comeback.

It’ll be vital for Williams to play up to his potential, because Bulldogs field general Jake Fromm gives the visitors such an edge at the most important position.

For fans of football trench warfare, it doesn’t get much better than Saturday’s Big Ten skirmish between the 15th-ranked Badgers and AP No. 12 Wolverines.

The Badgers will likely try to impose their will by pounding the rock with dynamic lead back Jonathan Taylor.

But if that doesn’t work and the Big House crowd gets behind the Wolverines, Gary, Winovich and Co. may force interception-prone Wisconsin quarterback Alex Hornibrook into some game-breaking mistakes.

Lock has serious arm talent and got off to a hot start this year for Missouri but has regressed. Saturday in Tuscaloosa will be Lock’s toughest test yet. He’s completed less than 48 percent of his passes over his last two starts versus Georgia and South Carolina — both losses.

No. 1 Alabama is in the top 10 in yards per attempt allowed at 5.5. The only saving grace for Lock and Mizzou is the fact that the Crimson Tide have lost key defensive backfield players to long-term injuries in Trevon Diggs, Daniel Wright and Jalyn Armour-Davis.

Arkansas scored 31 last week against Alabama, though it was inconsequential as the Lock’s Week 7 counterpart, Tua Tagovailoa, helped lead the Tide to 65 points by day’s end.