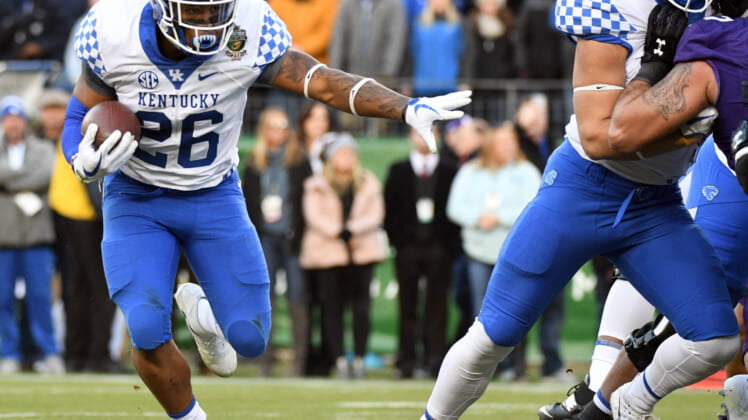 After a wild prior weekend where a couple ranked teams fell in shocking upsets and others were pushed to the brink of defeat, the college football landscape has been considerably altered entering Week 5.

Some teams who looked like indefatigable powerhouses are suddenly vulnerable. One reigning playoff team is turning to a first-year phenom at quarterback. That’s the mere tip of the proverbial iceberg when it comes to this week’s compelling matchups.

Read on for more on the most compelling developments to monitor among Week 5’s best action.

Syracuse at No. 3 Clemson

The Orange defeated the Tigers in 2017 and are 4-0 this year. Syracuse hasn’t begun a season that well since 1991 and ranks second nationally in third down conversion defense and tied for second in interceptions with seven. Freshman Andre Cisco already has four picks.

It’s hard to imagine Clemson falling to the Orange again. However, true freshman quarterback Trevor Lawrence is making his first start. Lawrence has seen action already and has looked up to the task, highlighted by three touchdown drives in a 28-26 win over Texas A&M.

All eyes will be on Lawrence taking on a feisty defense as the official QB1. Lawrence is replacing Kelly Bryant, who led the Tigers to the playoffs last season while succeeding Deshaun Watson.

No hiccups so far for the Mountaineers. Dynamic thrower Will Grier triggers their perpetually prolific passing attack that is downright lethal, with Grier averaging 11.76 yards per attempt. Hence the high regard in the most recent AP poll.

Texas Tech is traditionally a passer’s paradise, yet the Red Raiders also have a strong ground game that gained 224 yards in a 41-17 statement road win over Oklahoma State in Week 4.

This clash of high-octane offenses may come down to red zone execution, where West Virginia has the edge with a devastating target in David Sills V. He uses his 6-foot-4 frame to great effect, and already has five touchdown catches in 2018 after hauling in 18 last season.

Heisman Trophy contender Bryce Love is a beast in the Cardinal backfield. What makes Stanford’s offense so dangerous is its balance, thanks to K.J. Costello.

The junior passer, aided by a legitimate NFL receiver prospect in JJ Arcega-Whiteside, will make life difficult for the Fighting Irish as they defend their home field in South Bend.

But Ian Book is now the starter under center over Brandon Wimbush for the Fighting Irish. Book acquitted himself well with five total touchdowns in his maiden start: last week’s 56-27 road romp over Wake Forest.

If Love’s brilliance allows Stanford to control time of possession, Book will have to come up big against a Cardinal secondary that looked rather vulnerable against Oregon.

Huskies senior quarterback Jake Browning is coming off a stellar outing in a 27-20 win over Arizona State. He threw three touchdowns and was interception-free for the first time this year.

Browning has a prolific starter in running back Myles Gaskin and an excellent defense to bail him out. Lackluster arm strength and quality opponents have exposed Browning somewhat in the early going of 2018.

Perhaps the Cougars can capitalize and pull off another upset. They took advantage of suspect quarterback play by Wisconsin’s Alex Hornibrook in a 24-21 victory earlier this month.

Look for BYU to hone in on the Gaskin-led running game and pressure Browning in what should be one of the most competitive, hard-fought Week 5 contests.

Justin Herbert was phenomenal against Stanford and was hardly at fault for Oregon blowing a 31-7 lead. Before his team fell in overtime, he’d completed 25-of-27 passes for 331 yards and a score.

The Ducks must have a short memory as they take on a frisky Golden Bears team. Fresh off a bye, Cal has had great success defending the pass, yielding only a 52.5 completion percentage and 170.7 yards per contest.

Herbert is a far superior passer to anyone the Golden Bears have faced thus far. There’s little chance Herbert will allow Oregon to drop two straight.

Look for another big-time performance as Herbert further cements himself as the top 2019 NFL draft quarterback prospect.

The Big Dipper is a star that can be re-purposed to describe McSorley’s drastic accuracy drop in 2018. After completing 66.5 percent of his passes last year, Penn State’s field general has a paltry 53.8 completion percentage.

One might’ve assumed the Nittany Lions would have the edge at quarterback in this matchup before the season. Ohio State has an NFL-caliber stud in Haskins leading the offense, however.

Haskins is completing 75.7 percent of his passes with 16 touchdowns to one interception and averages 10.38 yards per attempt.

If Penn State is meant to have any chance at protecting its home turf in Happy Valley, McSorley must rise to the supreme standard set by his counterpart.

The Kentucky running back had a breakout 2017 season and now the rest of the Wildcats are following suit. Early-season SEC victories over Florida and Mississippi State vaulted UK to No. 17 in the latest AP poll.

Now Snell and the Wildcats’ rushing attack draw a favorable matchup against the Gamecocks this weekend. Although South Carolina is stout against the pass, the defense has yielded 163 yards per game on the ground.

Georgia racked up 271 rushing yards and three touchdowns in a 41-17 win over the Gamecocks in Week 2. Snell already has 540 yards rushing and seven scores this year. Unless he’ll be in for another big outing this Saturday in Lexington.

Dan Mullen vs. his former team

The new Florida head coach is taking on the Mississippi State program he led for nine seasons and lifted to new heights. Mullen had a previous stint as the Gators’ offensive coordinator and quarterbacks coach from 2005 to 2008 before taking the Bulldogs’ head job.

Florida lost to Kentucky in Week 2, which doesn’t look so bad now, considering Mississippi State suffered the same fate this past weekend.

Starkville should welcome Mullen warmly before kickoff. After that, it won’t be so friendly as the 23rd-ranked Bulldogs are in a must-win situation. Their upcoming slate of five games features Auburn, LSU and Alabama, with the latter two being on the road.