More than pride at stake when Thunder face Pistons 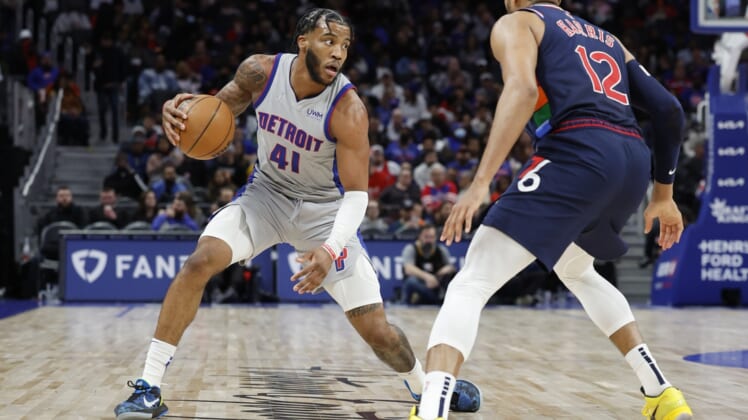 There wasn’t much on the line when the Oklahoma City Thunder met the Detroit Pistons in early December.

Both teams were mired in eight-game losing streaks and were already well back in the standings.

However, because of the teams’ struggles — both before and after that Dec. 6 meeting in Detroit — Friday’s second and final matchup between the teams, this time in Oklahoma City, has plenty of importance.

With less than two weeks remaining in the regular season, the Thunder (22-54) and the Pistons (21-56) are separated by just 1 1/2 games for the third-worst record in the NBA.

The bottom three teams in the final standings share the best odds for winning the No. 1 overall pick in this summer’s draft.

Those standings tightened up Thursday night with Detroit’s 102-94 home win over Philadelphia. The Pistons outscored the 76ers 29-15 in the fourth quarter, with 10 of those points from Saddiq Bey.

“It was a complete 48 (minutes),” Pistons coach Dwane Casey said. “It’s something we’ve been preaching all year. … If we made any threes, it wouldn’t have been as close as it was.”

Detroit was just 5 of 25 from beyond the arc through the first three quarters before shooting 5 of 10 on 3-point attempts in the fourth.

Bey became just the fifth player in NBA history to hit 200 or more 3-pointers in a season at the age of 22 or younger. Anthony Edwards, Trae Young, D’Angelo Russell and Klay Thompson also accomplished the feat.

The Pistons likely will be without forward Marvin Bagley III for the Friday game. Bagley left the Thursday contest in the third quarter with a left hip flexor strain after taking a hard foul from the 76ers’ Joel Embiid.

The win was just the third in the past 12 games for Detroit.

Oklahoma City comes into Friday’s game having lost 12 of its past 14.

The Thunder began the current four-game homestand — their last home games of the season — with a 136-118 loss to the Atlanta Hawks on Wednesday.

Oklahoma City has dropped 12 of its past 13 home games.

The Thunder will have just eight players available for the third consecutive game, with more players listed as out on the injury report (nine) than they’ll be able to utilize.

All eight have spent time this season in the G League, but Oklahoma City coach Mark Daigneault said their extended time with the Thunder will be beneficial down the road.

Among the players getting a longer look now is rookie Vit Krejci, who was injured early in the season and played just nine total minutes in three appearances over Oklahoma City’s first nine games.

Krejci has played at least 27 minutes in six of the past seven games, including playing more than 32 each of the past two. Over the past four games, he is averaging 10 points, 5.8 rebounds and 3.8 assists.

“I don’t think he’s at his peak physicality,” Daigneault said. “This is a good stress test for him.

“I don’t think he’s moving as well as he could move.”