More than ever, Kevin Durant should re-sign with the Warriors 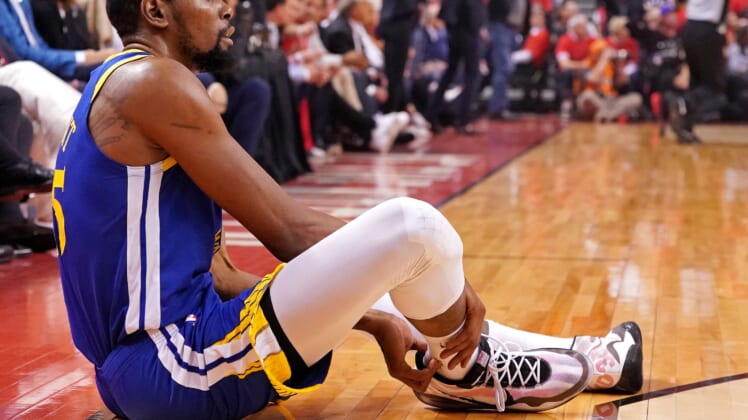 What everyone had feared days before is now a reality. Further tests on Kevin Durant’s injured Achilles showed that the Golden State Warriors star suffered a rupture, which required surgery.

Making his first appearance in over a month since suffering a calf strain in the conference semifinals, Durant worked his way back to help Golden State stave off elimination in Game 5. Then, it happened.

The injury is going to cost the two-time reigning NBA Finals MVP at least the entire 2019-20 season. It’s a devastating turn for one of the game’s best talents and a man that was set to be the toast of free agency next month.

Where does Durant go from here? What are his options?

After months of speculation that KD was going to leave the Warriors for another NBA city, we’re here to say that him re-signing with the Warriors makes more sense now than ever before.

Durant has options: He could still hit free agency in 2020.

The finances: It’s the economy, stupid!

The Warriors owe it to him: A classy organization needs to live up to its billing.

The known: Despite the narratives, Durant and the Warriors work well.

San Francisco: This has always played a role in Durant’s decision-making process.

Despite rumors to the contrary, it was never a foregone conclusion that Durant was going to leave the Warriors in free agency. He’s made that clear himself.

Now that one of the game’s best players if facing the biggest uphill climb of his career, it makes the most sense for Durant to opt out of his deal and sign a super-max contract with the Warriors.

This would give Durant financial security that no other team can offer him. He can remain a larger-than-life figure within an organization that has helped him grow. And more importantly for someone of Durant’s ilk, this would offer him a calming presence at a time that the star needs it.

In turn, the Warriors could do right by their star forward. Whether the organization is to blame for this latest injury is up for interpretation. But by offering him the super-max deal, Golden State would be telling Durant just how much the organization thinks of him.