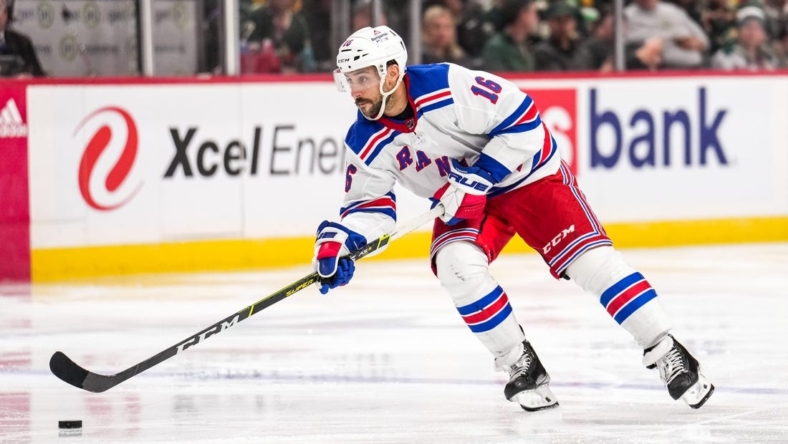 During their first four-game losing streak under coach Gerard Gallant, the New York Rangers had little to show for an abundance of shots on goal, though they vowed the goals would eventually appear.

On Saturday, the Rangers finally produced the goals they were seeking and hope to continue their production Sunday night when they visit the Arizona Coyotes in their new, temporary arena in Tempe, Ariz.

In the prior four games, New York had taken two home defeats — one in overtime, one in a shootout — along with a 5-1 loss to the visiting Columbus Blue Jackets and a 3-0 loss to the host New York Islanders on Wednesday. During those games, the Rangers averaged 35.2 shots on goal, and produced 46 and 41 respectively in the final two games of the skid.

On Saturday afternoon, New York finished with 27 shots in a 6-3 victory at Dallas. In a game in which they produced their second-lowest amount of shots on the season, the Rangers scored two power-play goals and three in a span of 2:07 in the third period.

Zac Jones scored the first goal of his career while Trocheck scored twice and produced a three-point showing. Mika Zibanejad, Chris Kreider and Julien Gauthier also scored for the Rangers, who posted at least six goals for the third time this season.

“We started seeing them go in,” Trocheck said. “Our power play was good tonight. We were getting a little bit tight, gripping our sticks a little too tight, just from a couple games not scoring. But we’ve been getting chances, and tonight we were able to capitalize on a couple.”

After going 2-4-0 on a season-opening six-game road trip, the Coyotes are playing their second game in the 5,000-seat Mullett Arena at Arizona State University. They are hoping to build a modest home-ice advantage after 4,600 fans attended their 3-2 overtime loss to the Winnipeg Jets on Friday.

“We’re going to pack it out, and have that kind of crowd buzzing, and hopefully put on some good games against some good teams that are coming here,” Arizona forward Christian Fischer said. “It’s going to be our home for three years here, maybe even four. I think the more we embrace it, it’s a tough place to play.”

Fischer scored the first Arizona goals in its new facility but the Coyotes were outshot 35-21 and failed to get the extra point when Blake Wheeler finished off a two-on-none 32 seconds into overtime for Winnipeg.

“We kind of got away from what made us successful in the third,” Arizona’s Clayton Keller said. “We played like we had the lead instead of pressuring them. We just started backing up, and then they’re flying through the neutral zone.”

The Rangers won both meetings between the clubs last season and are 11-1-2 in the past 14 meetings.