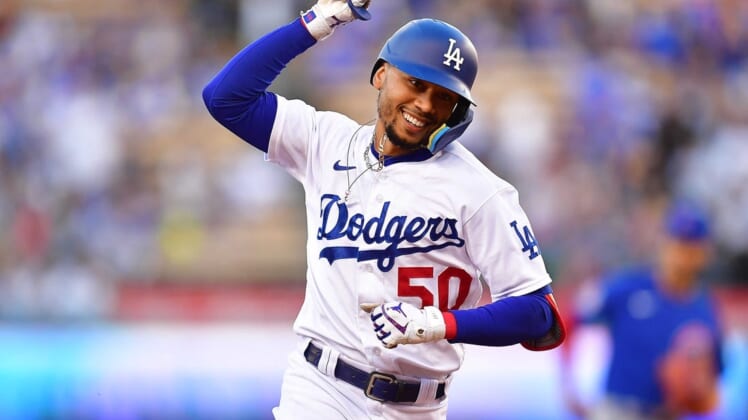 Tony Gonsolin pitched seven strong innings and Mookie Betts hit a pair of home runs as the Los Angeles Dodgers held on for a 5-3 victory over the visiting Chicago Cubs on Thursday in the opener of a four-game series.

One start after he delivered a career-best 7 2/3 innings, Gonsolin (11-0) held Chicago to two runs and became the first 11-game winner in the National League. He is the second Dodgers pitcher ever to open a season 11-0; Alex Wood also did it in 2017.

Gavin Lux and Justin Turner also hit home runs as the Dodgers won for the eighth time in their last nine games and improved to 7-1 on a season-long 11-game homestand.

Christopher Morel hit a home run for the Cubs, while Mark Leiter Jr. threw a season-high 82 pitches in his return to the starting rotation. The Cubs dropped their seventh consecutive game to the Dodgers.

Los Angeles jumped in front quickly when Betts hit Leiter’s second pitch over the wall in center field. In the second inning, the Dodgers got Trayce Thompson’s double and a deep drive to right field from Lux for a 3-0 advantage. It was Lux’s third homer of the season.

Turner’s home run to center field came in the fourth inning, for a 4-0 lead.

The Cubs cut the deficit in half in the fifth as Morel went deep just inside the left-field foul pole. It was his ninth home run of the season and his sixth in 21 games going back to June 15.

The Dodgers received a scare in the fifth inning when Betts was hit in the back of the left hand by a pitch from Leiter. Betts remained in the game and added another home run to center in the eighth inning. It was his 20th homer of the season.

The Cubs rallied in the ninth against former closer Craig Kimbrel, putting two aboard after Seiya Suzuki’s RBI double. Los Angeles left-hander Alex Vesia then struck out Nelson Velazquez to end it for his first save.

Leiter (2-3) gave up four runs on five hits over five innings, with no walks and four strikeouts, in his fourth start of the season and first since April 27.

Dodgers right-hander Brusdar Graterol left after four pitches in the eighth inning, favoring his right side.