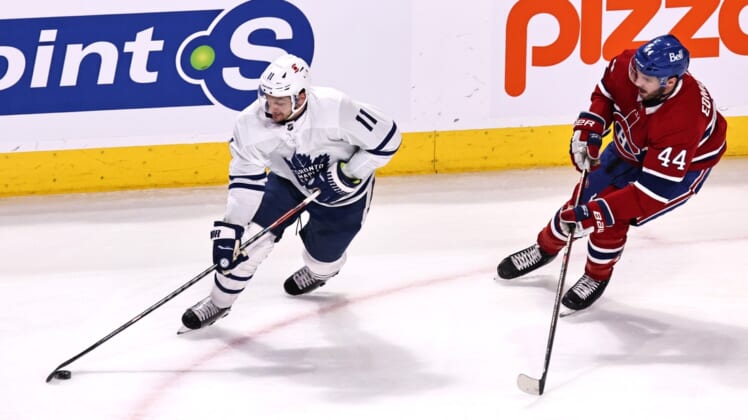 Tomas Tatar scored two goals and Paul Byron had two assists as the Montreal Canadiens recorded a 4-2 victory over the visiting Toronto Maple Leafs on Monday.

The result snapped the Canadiens’ three-game losing streak, and improved their record to 2-3-1 against first-place Toronto this season.

The Leafs suffered their first regulation loss in 11 games (9-1-1) and saw their six-game winning streak snapped.

Auston Matthews scored his league-leading 32nd goal of the season. The Toronto forward has scored in each of his last five games, and has 17 points (11 goals, six assists) over his last 10 games.

Tatar put Montreal ahead after just 1:17 of action. A turnover and then a strangely deflected puck went right to Tatar in front of the net, and the forward buried the chance for his ninth goal of the season.

At the 7:53 mark, Suzuki extended the Canadiens’ lead on a power-play goal. It was a much-needed breakthrough with the extra attacker for the Habs, who were just 1-for-21 on power plays in their previous seven games.

The Maple Leafs had more giveaways (four) than shots (three) in a lackluster first period for the visitors, but they rebounded in the second frame to tie the score on the goals from Matthews and Tavares.

Just 85 seconds after Tavares’ equalizer, however, the Habs regained the lead on Anderson’s 15th goal of the season. Leading a two-on-one rush, Anderson faked a pass and took the shot himself, beating Campbell on a wrist shot.