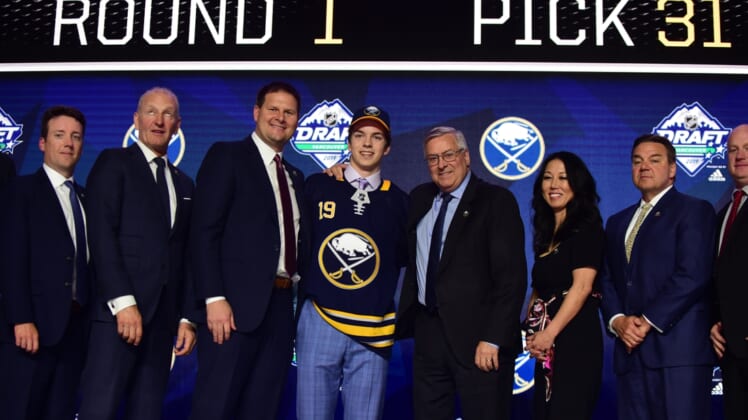 Jun 21, 2019; Vancouver, BC, Canada; Ryan Johnson poses for a photo after being selected as the number thirty-one overall pick to the Buffalo Sabres in the first round of the 2019 NHL Draft at Rogers Arena. Mandatory Credit: Anne-Marie Sorvin-USA TODAY Sports

The Montreal Canadiens will host the 2022 NHL Draft at the Bell Centre, the league announced Friday.

The city had been scheduled to host the draft in 2020, but the event was held virtually because of the COVID-19 pandemic instead, as it was in 2021.

“We are proud to announce that, once again, we are conducting our Draft in front of the great fans of the Montreal Canadiens,” NHL commissioner Gary Bettman said in a statement. “Montreal, the site of the first NHL Draft in 1963, is a wonderful place to bring the NHL family together and to focus on the future of our game.

The draft will start July 7 with the first-round picks. Rounds two through seven will be held the following day.

Montreal has hosted the event 26 times, most recently in 2009. The league conducted the 2019 draft in Vancouver.

The Buffalo Sabres selected Owen Power with the No. 1 overall pick in 2021. He is committed to returning to school at Michigan in the upcoming season.