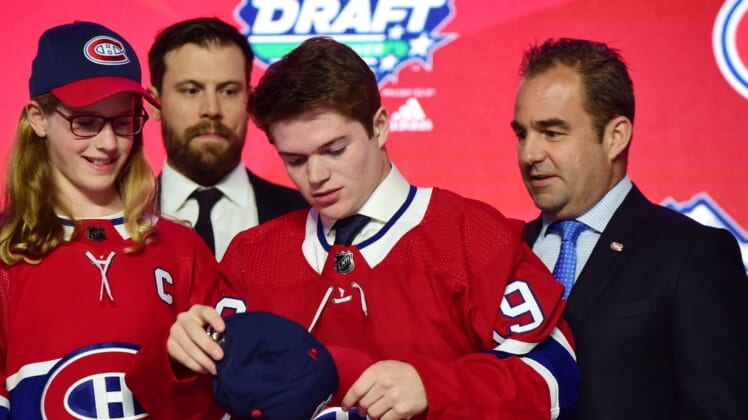 (EDITORS NOTE: caption correction) Jun 21, 2019; Vancouver, BC, Canada; Cole Caufield after being selected as the number fifteen overall pick to the Montreal Canadiens in the first round of the 2019 NHL Draft at Rogers Arena. Mandatory Credit: Anne-Marie Sorvin-USA TODAY Sports

Forward Cole Caufield, the No. 15 pick in the 2019 NHL Draft, signed a three-year, entry-level contract with the Montreal Canadiens on Saturday.

Caufield, who just finished a stellar sophomore season at Wisconsin, will report to the Laval Rocket of the American Hockey League. The Badgers lost to Bemidji State, 6-3, in the first round of the NCAA Tournament on Friday.

Caufield, 20, led the NCAA with 30 goals and the Big Ten with 52 points this season. He was the Big Ten Player of the Year and a top-10 finalist for the Hobey Baker Award, given to the best player in NCAA Division I men’s ice hockey.

The Wisconsin native is expected to be serve a seven-day quarantine, with 14 days of COVID-19 testing, upon arriving in Canada.

Montreal (14-8-9) is in fourth place in the North Division with 37 points, two ahead of the Calgary Flames for the division’s final playoff spot.

The Canadiens haven’t played since beating Vancouver 5-4 in a shootout on March 20. Four games were postponed due to NHL COVID-19 protocols and Montreal’s next game is scheduled for Tuesday at Ottawa.