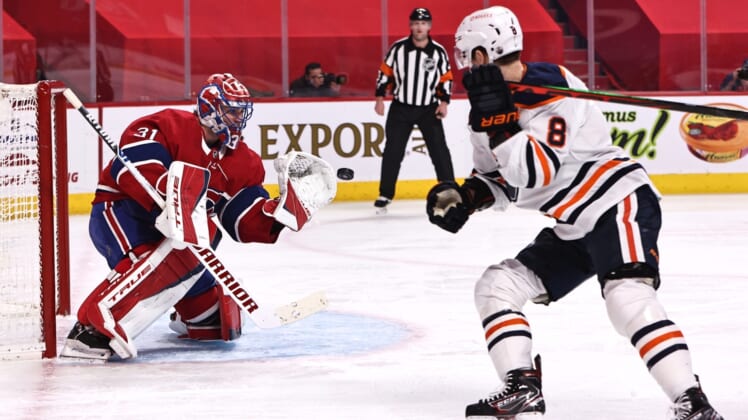 Coming off a successful return to the ice, the Montreal Canadiens look to keep the momentum going when they visit the Ottawa Senators on Thursday night.

After a nine-day break between games due to COVID-19 protocols, the Canadiens were in fine form in a 4-0 shutout of the Edmonton Oilers on Tuesday in Montreal. The Habs scored twice within the first four minutes of play and outshot the Oilers 32-17 overall.

“We were actually pretty crisp for not playing for a week,” Montreal captain Shea Weber said. “We knew we were going to have energy. Obviously, rest is key, especially in a season like this where it’s tough to get rest. … So we knew we were going to be fresh, but we just harped on the little things and keeping it simple.”

It was the first shutout of the season for both the Canadiens and goalie Carey Price. The goaltender’s 17 stops matched the lowest number of saves he has had to make in any of his 49 career shutouts.

Price is likely to start again Thursday, or the Habs could opt to give backup Jake Allen his first action since March 19.

The Canadiens are 3-0-2 in their past five games. A lot of work stands between the Habs and a postseason trip, however, as Montreal is scheduled to play 24 times over the regular season’s final 41 days.

The Senators also face a grind down the stretch, as Thursday’s game is the first of 20 games in 40 days. Ottawa hasn’t played since March 25, thanks to two postponements of scheduled games against the Canadiens.

Ottawa coach D.J. Smith took advantage of the free time to give his players multiple days off from practice.

“I think it’s tempting to really want to work and push these guys, but with 20 games in such a short amount of time, it’s going to come on quick,” Smith said. “So I think it’s a good time for us to take that rest.”

The Senators’ hiatus came in the midst of the team’s most consistent stretch of the season. In the first six games of their seven-game homestand, the Senators are 3-0-3, their longest streak without a regulation loss since the 2016-17 season.

Ottawa’s strong penalty kill has helped make up for the club’s lack of power-play scoring. The Senators are scoreless in their past 14 power-play opportunities, and 3-for-34 with the extra attacker over their past 13 games.

The Senators also have gotten impressive goaltending lately, despite injuries to each of their top three goalies. Two of those goalies could be possibilities for Thursday, as Matt Murray has returned to practice and Marcus Hogberg has been playing in the AHL on a rehab assignment.

That said, Filip Gustavsson and Anton Forsberg played well enough that Ottawa surely wouldn’t mind giving either goalie another start. The duo has combined for a 2-0-2 record over the Senators’ past four games.

Ottawa is 3-2-0 in five prior meetings with the Canadiens this season. The two rivals will play again in Montreal on Saturday.