Ducharme, whose positive test was confirmed Friday, said Sunday that he is hopeful he won’t need to remain isolated for 14 days before he can be cleared to return, under NHL protocol rules. He received both doses of his COVID-19 vaccine — the second coming on June 9 — which would qualify him as fully vaccinated on Wednesday. In a video chat with reporters, he said he doesn’t have any symptoms. 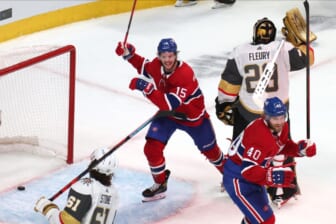 The series continues Sunday night in Montreal. The Canadiens have a 2-1 lead in the best-of-seven series.

“I wish I could be at the rink right now. I don’t feel different than a week ago,” Ducharme said.

Game 5 is scheduled for Tuesday in Las Vegas. If necessary, the series will return to Montreal for Game 6 on Thursday and to Las Vegas for Game 7 on Saturday.

Ducharme, 48, said the team is working with the NHL and the Canadian government to determine how long his quarantine must last, but he’s confident he’ll coach his team in person again this postseason.

“I believe I’ll be back,” he said. “I’m hoping to be as soon as possible. Our players want to continue their run. No matter when I do return, I’m confident we’ll still be playing.”

Richardson is being assisted by coaches Sean Burke and Alexandre Burrows, with Ducharme advising the coaches and players via videoconference.