The Montana Grizzlies of FCS, a top team at that level but coming into Saturday with 10 consecutive losses to Washington of the Pac-12, upset the 20th-ranked Huskies in Seattle with a come-from-behind, 13-7 victory in Seattle.

Montana, which lost 63-7 to Washington in 2017 in the previous meeting between the teams, executed two, fourth-quarter scoring drives, holding on for a historic win for the program and a signature win for former Washington assistant Bobby Hauck.

The Huskies had outscored Montana 318 to 34 in the previous 10 meetings. But on Saturday, the Grizzlies defense was stellar. 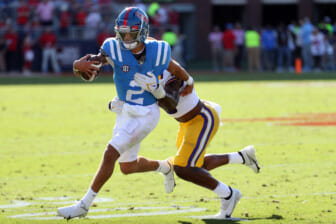 Washington had the ball with just under three minutes to play, trailing 13-7 after a 22-yard field goal by Montana’s Kevin Macias. But they turned the ball over on downs with 1:33 left.

The Huskies used all three of their timeouts and got the ball back after Macias came up short on a 50-yard field goal with 1:12 to play.
With no timeouts, Washington needed 68 yards for a touchdown to have a chance to win.

But Marcus Welnel picked off a Dylan Morris pass with 31 seconds to play, and an 11-game winning streak in home openers came crashing to an end for Washington.

A touchdown on the opening drive of the game seemed to be a sign of big things to come from Washington’s offense on a cloudy day along the shores of Lake Washington. Morris engineered a nine-play, 78-yard drive that he capped off with a one-yard run into the end zone.

The Grizzlies couldn’t solve the Huskies’ vaunted defense for much of the game, managing a first-quarter field goal. But the Montana defense, which intercepted Morris three times, never let the Huskies’ lead grow.

Montana managed just 232 yards of total offense and only 10 first downs, going 2 of 13 on third down. Washington was held to 291 total yards, 65 on the ground.