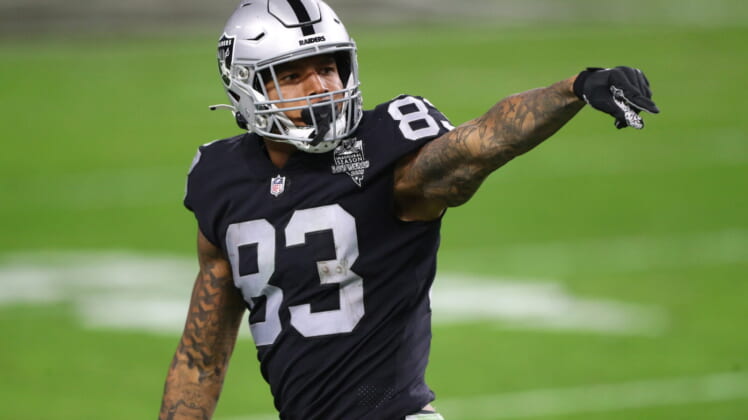 The day that the Las Vegas Raiders begin their 2021 campaign is finally here as they will host the Baltimore Ravens at Allegiant Stadium in front of a raucous crowd. It’s the first regular season game the Raiders will play in Las Vegas that will feature fans and Raider Nation will be sure to make their presence felt on Monday Night Football.

While many Week 1s in recent history have featured two games during Monday Night Football, the Raiders and Ravens will be the only two teams playing tonight, ensuring that people all around the world will be focused. After plenty of offseason changes, Jon Gruden’s squad will be looking to prove that they are legitimate contenders with a statement win over a strong Ravens team.

It won’t be an easy game for a Raiders team that has been priced as four-point underdogs despite their home field advantage. The Ravens last season devastated teams with their multi-pronged rushing attack that is led by former-MVP Lamar Jackson. While Baltimore has suffered some unfortunate injuries in training camp, they still boast a roster filled with talented players at key positions.

The Raiders have a difficult start to the season with this matchup against the Ravens followed by games against the Pittsburgh Steelers and Miami Dolphins. They’re going to want to get off on the right foot else they risk digging themselves a hole too deep to get out of. To secure the win tonight, they’re going to need to focus on these three keys for victory.

The Raiders enter Week 1 of this season with a very different offensive line than they had last season. Trent Brown, Rodney Hudson, and Gabe Jackson are all gone and they have been replaced by a variety of free agent signings, internal promotions and rookies.

While the Ravens pass rush isn’t among the most elite in the league — they finished last season ranked 14th with 2.3 sacks per game — the inexperience among the Raiders’ offensive linemen could lead to a big night. Old AFC West foe Justin Houston is now on the Ravens and if the Raiders fail to block him, he will make it a very long night for Derek Carr.

The Raiders will also want to scheme open Henry Ruggs III on a few deeper routes and take advantage of his blazing speed. To do this they’re going to need time in the pocket and for the offensive line to gel together quickly.

Take Attention Away from Darren Waller

Darren Waller is the most explosive weapon on the Raiders offense and he is the biggest chess piece available to Jon Gruden, especially when inside the red zone. Waller is too big for defensive backs and too fast for linebackers, giving the Raiders an instant matchup nightmare.

However, the Ravens allowed just five touchdowns to tight ends all of last season and are sure to be focused on limiting Waller tonight. The Raiders also overhauled their wide receiver group and will be starting sophomores Bryan Edwards and Ruggs on the outside tonight. Those players don’t have the pedigree yet to draw attention away from Waller.

Thus, Edwards and Ruggs making big plays early in the game and diverting attention away from Waller would bring many benefits for the Raiders. This would ensure more one-on-one matchups for the elite tight end and help the offence be more proficient in general.

Last season, the Raiders had a bad habit of shooting themselves in the foot by turning the ball over. They finished 27th in the league in turnovers, averaging 1.6 every game. The Ravens on the other hand average only 1.1 per game, good enough for 8th in the NFL.

Against a team that can control the clock and game flow with a strong running game like the Ravens, it’s imperative to not turn the ball over. Keeping the turnover battle close will go a long ways towards the Raiders staying competitive in this game.

Much of the responsibility for this will land on Derek Carr. Keeping the ball safe needs to be the number one priority else the Raiders may find themselves down in a hurry.