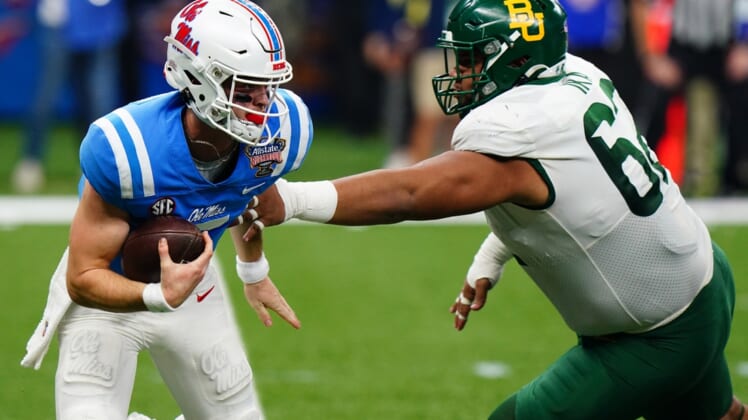 Monara Baldwin scored on a tiebreaking 48-yard run as No. 7 Baylor notched its school-record 12th win by beating No. 8 Ole Miss 21-7 on Saturday night at the Sugar Bowl in New Orleans.

With the teams tied at 7-7 in the fourth quarter, Baldwin took off on a jet sweep and blazed his way to the end zone to give the Bears (12-2) the go-ahead score with 11:14 remaining.

Abram Smith rushed for 172 yards on 25 carries, and Gerry Bohanon was 7 for 17 for 40 yards with a touchdown and an interception after missing the previous two games.

JT Woods produced two interceptions and Al Walcott had a 96-yard pick-six for the defense, which logged 10 sacks and recorded a turnover for the 22nd straight game.

Playing his final game for Ole Miss (10-3), quarterback Matt Corral left with 2:13 remaining in the first quarter after suffering a lower-leg injury while being sacked by Baylor’s Cole Maxwell.

He rushed seven times for 17 yards and was 2 for 6 for 10 yards with an interception in three series. The star signal-caller later returned to the sideline on crutches.

True freshman Luke Altmyer replaced Corral and was 15 for 29 for 174 yards with a touchdown and two interceptions. Dontario Drummond’s 104 yards on nine receptions pushed him past 1,000 receiving yards for the season.

Baylor’s defense entered with 16 interceptions — seventh in the country — and delivered a message early, with Woods picking off Corral downfield on the second play from scrimmage.

With Altmyer in, Ole Miss moved inside the red zone early in the second quarter. Matt Jones then batted the quarterback’s pass right to Walcott, who dashed 96 yards for a 7-0 lead with 10:16 left until halftime.

However, Altmyer tied it with 9:13 left in the third quarter when he lobbed a perfect 37-yard strike to Braylon Sanders — Altmyer’s first career TD pass.

Tyquan Thornton caught a short TD pass midway through the fourth for the final margin after Woods’ second interception set up Baylor at the Ole Miss 15.