Mohamed Ibrahim’s big first half more than enough for Minnesota vs. Colorado 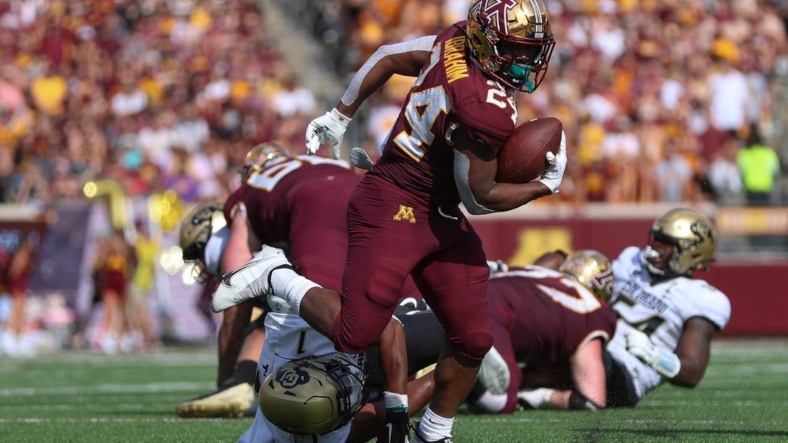 Mohamed Ibrahim rushed for 202 yards and three touchdowns on 23 carries as Minnesota remained undefeated with a 49-7 victory over visiting Colorado on Saturday in Minneapolis.

Ibrahim, who had scoring runs of five, two and 18 yards, amassed 179 yards and all three touchdowns on his 20 first-half carries to lead the Golden Gophers to their first 3-0 start since 2019.

J.T. Shrout went 4-for-11 passing for 24 yards and a touchdown for Colorado, which is winless in its first three games to open a season for the first time since 2012. Deion Smith rushed for 70 yards on 10 carries, while Daniel Arias had three receptions for 22 yards.

Colorado turned the ball over on their first play from scrimmage when Shrout was sacked and fumbled, with Minnesota making the recovery on the Buffaloes’ 11 yard-line.

Ibrhaim took it from there, as he followed his nine-yard run with a two-yard touchdown burst for a 14-0 lead with 8:44 left in the first quarter.

Ibrahim scored his third touchdown of the half on an 18-yard burst for a 21-0 lead with a little more than nine minutes left in the first half.

Morgan extended the lead to 28-0 with a 39-yard scoring strike to Autman-Bell with 1:37 left in the second quarter before finding Dylan Wright for a 16-yard touchdown pass with eight second left in the first half to make it 35-0.

Morgan tossed an eight-yard touchdown pass to Clay Geary for a 42-0 lead with 3:46 left in the third quarter before Williams’ 22-yard touchdown run made it 49-0 less than a minute into the fourth quarter.

Colorado avoided the shutout on Shrout’s four-yard touchdown pass to Austin Smith with 8:55 left in the game.