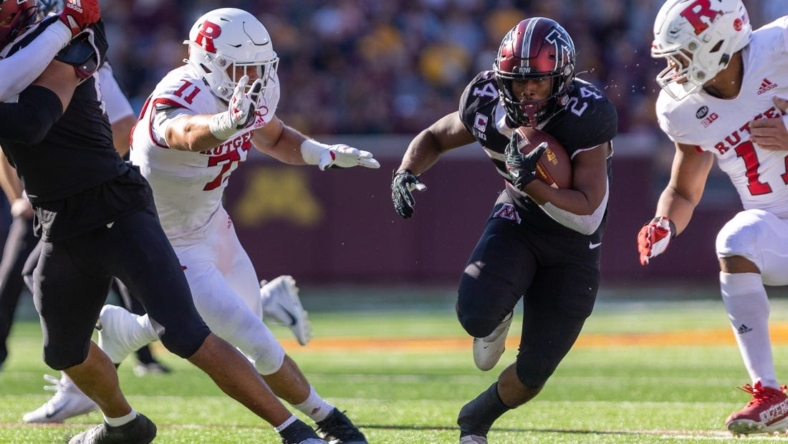 Mohamed Ibrahim rushed for three touchdowns and Minnesota’s defense was dominant in the Golden Gophers’ 31-0 win over visiting Rutgers Saturday in Big Ten play at Minneapolis.

Ibrahim, who rushed for 159 yards on 36 carries, broke the school record for rushing touchdowns and finished with the day with 46.

The Golden Gophers chewed up 10 minutes and 27 seconds of game clock in the first half, finishing a 19-play, 99-yard drive with Ibrahim’s 2-yard touchdown run early in the second quarter.

Ibrahim’s second score, came on a fourth-and-1 play with 5:14 to play in the first half, He ended the day in the top 10 all-time in the Big Ten in rushing touchdowns.

About the only highlights of the game for the Scarlet Knights (4-4, 1-4) were two Adam Korsak punts. The first was downed at the Minnesota 1-yard line in the first quarter, and the second traveled 77 yards in the second quarter. He averaged 51.2 on five punts.

Rutgers quarterback Gavin Wimsatt, one of three rotational quarterbacks for the Scarlet Knights, got the start and played the first half. He lost a fumble and guided his offense to only 58 total yards.

Things didn’t get much better for Rutgers in the second half. The Scarlet Knights couldn’t find any more rhythm on offense, and Wimsatt threw an interception to Sean Ryan with 11:08 to play in the game.

That led to Ibrahim’s third touchdown, a 28-yard run that put the game away with Minnesota taking a 21-0 lead. Ibrahim’s day was essentially over after that, the star running back having put in plenty of work on the afternoon.

Noah Vedral entered the game for Wimsatt with 10:10 to play, but it was too little, too late to try to give life to Rutgers’ offense. The Scarlet Knights managed just 134 yards of total offense. Minnesota had 375.