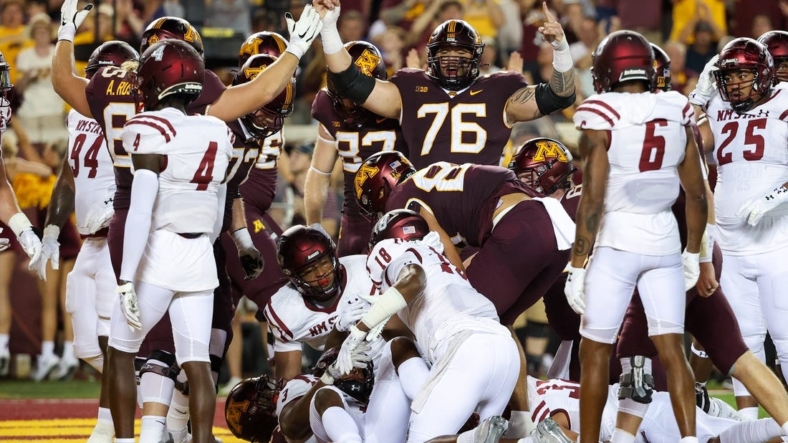 Mohamed Ibrahim rushed for 132 yards and two touchdowns as the Minnesota Golden Gophers opened their season by flattening New Mexico State 38-0 in Minneapolis on Thursday night.

Quarterback Tanner Morgan threw for 174 yards on 13 of 19 passing and added two touchdowns on 1-yard runs. The Golden Gophers scored on their first six possessions and dominated throughout, outgaining the Aggies 485 yards to 91 and dominating time of possession, 44:30 to 15:30.

Ibrahim, who did not play in the second half, topped 100 yards rushing for his 10th straight game, dating back to the end of the 2019 season. He missed all but one game last season due to a left leg injury.

Michael Brown-Stephens and Chris Autman-Bell each had three catches, totaling 52 and 38 yards respectively.

The Aggies went three-and-out on four of their eight possessions, and they had six first downs to 31 for Minnesota. They didn’t make it into Gophers territory until early in the fourth quarter.

Trey Potts, who added 89 yards rushing on 17 carries, scored from a yard out near the end of the third quarter to complete the scoring.

Freshman Gavin Frakes came on to go 2-for-7 for 43 yards, 34 yards on a completion to Justice Powers. It set up the Aggies on Minnesota’s 22-yard line, but Frakes’ pass was picked off by Terell Smith in the end zone with about 10 minutes left.

The Gophers’ first two touchdowns were on runs by Ibrahim. His 4-yard rush with 9:50 left in the first quarter capped a quick drive of 74 yards on seven plays that took only about three minutes. He then scored from 1 yard out to culminate a 13-play drive of nearly 13 minutes on the first play of the second quarter.

After Matthew Trickett’s 26-yard field goal midway through the second period extended the lead to 17-0, Morgan’s scores came in the closing seconds of the first half and with 6:31 left in the third quarter.