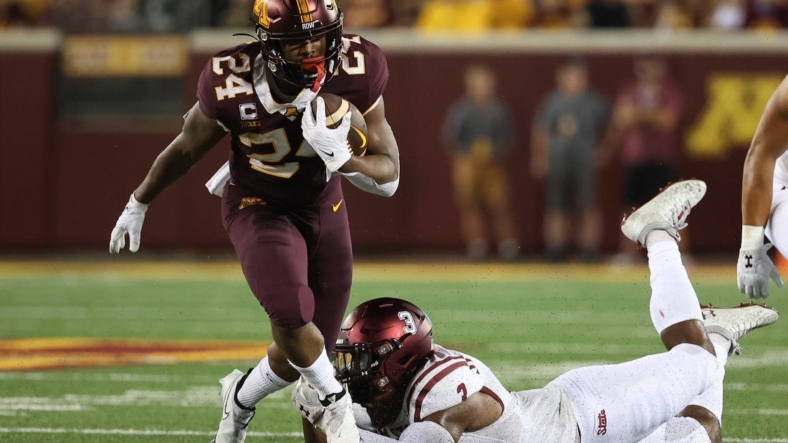 Mohamed Ibrahim will look to again headline a relentless Minnesota rushing attack Saturday when the Golden Gophers clash with Western Illinois at Minneapolis.

Ibrahim ran for 132 yards and found the end zone twice in Minnesota’s season-opening 38-0 win over New Mexico State. The performance marked the key chapter of a comeback story for Ibrahim, who was playing for the first time since sustaining a season-ending Achilles injury in the 2021 season opener against Ohio State.

“What he’s been through, and what he’s overcome, is what ‘Row the Boat’ is all about,” Minnesota coach P.J. Fleck said, alluding to his program’s slogan of perseverance. “It’s what his faith is all about, it’s the type of person he’s about. He played incredibly hard and he gave to his teammates the energy and everything he had.”

Tanner Morgan also rushed for two touchdowns for Minnesota (1-0), and Trey Potts gained 89 yards with a score as the team rolled up 297 yards on the ground.

The Gophers will try to replicate that performance against a Western Illinois defense that allowed 260 rushing yards last week in a 42-25 loss to Tennessee-Martin.

The Leathernecks (0-1) are potent on offense, especially considering how quickly quarterback Nick Davenport and receiver Naseim Brantley have built a rapport.

Brantley, a graduate transfer from Sacred Heart making his WIU debut, was on the receiving end of Davenport’s three touchdown passes. He finished with six catches for 171 yards.

“I’m a big playmaker,” Brantley said, according to Prairie State Pigskin. “I catch a lot of jump balls. I make big-time, consistent catches. I’m the guy that goes and makes the play if you need it to be made.”

The tandem might have a harder time connecting on Saturday, though, when they face a Minnesota secondary that features defensive backs Terrell Smith, Beanie Bishop and Michael Dixon.

Smith preserved the shutout against New Mexico State with an end-zone interception, while Bishop and Dixon each had two tackles in the opening win. Minnesota allowed only 91 yards of total offense.

Saturday marks the first-ever meeting between Minnesota and Western Illinois.