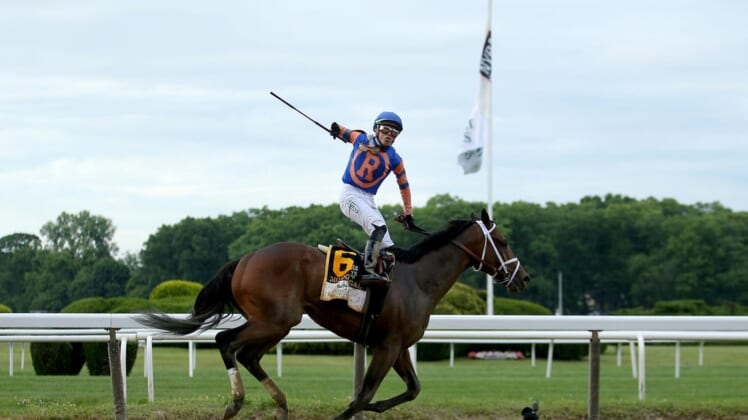 Mo Donegal, the 5-2 post time favorite, came from just off the pace and charged to the front in mid-stretch to win the 154th running of the Belmont Stakes on Saturday, the third jewel of the thoroughbred horseracing’s Triple Crown, in Elmont, New York.

Mo Donegal, ridden by Irad Ortiz Jr., covered the 1 1/2 miles of the Belmont Stakes in 2 minutes, 28.28 seconds, beating Nest, a filly with odds of 5-1, to the finish line by three lengths. Both the winner and the runner up are trained by Todd Pletcher, who captured his fourth Belmont Stakes and the eighth Triple Crown race of his career.

Skippylongstocking, an 11-1 longshot, finished third, with front-runner We The People holding on for fourth.

Mo Donegal is owned by Donegal Racing and Repole Stable. He finished fifth in the Kentucky Derby after winning the Wood Memorial at Aqueduct Racetrack on the other side of New York City.

Mo Donegal stalked the pace throughout as set by We The People, running around the sweeping first turn on the flank of Skippylongstocking and alongside Nest down the long backstretch. Mo Donegal pulled even with We The People as the eight-horse field turned for home and immediately accelerated to the front when he switched leads, drawing off as both Nest and Skippylongstocking never made a serious run at the winner.

Rich Strike, the longshot Kentucky Derby winner at odds of more than 80-1, was a disappointing sixth in his first race since winning the Run For The Roses on May 7.

Neither Early Voting, the Preakness winner, nor Epicenter, the favorite and eventual second-place finisher in both of the first two Triple Crown races, were in the field for the Belmont Stakes.

No horses ran in all three of the Triple Crown races. Saturday’s race was the first time since 1954 that the Derby winner missed the Preakness the same year that the Preakness winner opted out of the Belmont.

It’s the first time since 1926-29 that different horses have won the three Triple Crown races in four consecutive years.