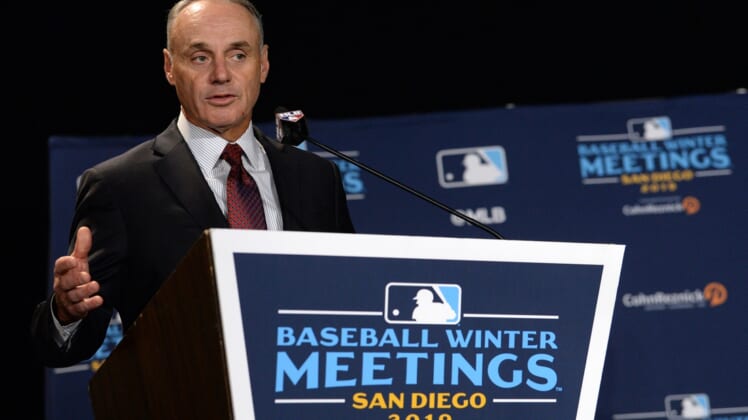 Major League Baseball will instruct teams to report on time for spring training and the 2021 season will start April 1 as planned after the players rejected a proposal for a one-month delay and a 154-game season.

MLB issued a statement Monday night saying the proposal was intended to allow for COVID-19 infection rates to decrease and additional time for the distribution of vaccines.

The proposal called for players to receive 100 percent of their pay if the 154-game season is completed and not interrupted by the coronavirus pandemic. It also proposed seven-inning doubleheaders and beginning extra innings with runners on second base, an expansion to 14 playoff teams instead of 10 and the use of the designated hitter in the National League for the second consecutive season.

It also would have allowed each team to schedule up to 12 split doubleheaders.

“This was a good deal that reflected the best interests of everyone involved in the sport by merely moving the calendar of the season back one month for health and safety reasons without impacting any rights either the players or the Clubs currently have under the Basic Agreement or Uniform Player’s Contract for pay and service time,” MLB said in its statement.

MLB said the changes instituted for the pandemic-shortened 2020 season “were overwhelming popular with our fans.”

The Major League Baseball Players Association did not offer a counterproposal. The union was reportedly against an expanded postseason that potentially can make it easier for teams to reach the playoffs while spending less money on players. Players also were concerned about the late timing of the proposal and potential for lost wages if the season were to be postponed or suspended.

“MLB’s proposal offers no salary or service time protections in the event of further delays, interruptions, or cancellation of the season,” the union said.

The start of spring training will remain Feb. 17, with Opening Day scheduled for April 1.

“In light of the MLBPA’s rejection of our proposal, and their refusal to counter our revised offer this afternoon, we are moving forward and instructing our Clubs to report for an on-time start to Spring Training and the Championship Season, subject to reaching an agreement on health and safety protocols,” MLB said in a statement.

“Our 2020 season taught us that when the nation faces crisis, the national game is as important as ever, and there is nothing better than playing ball. We were able to complete a 2020 season through Herculean efforts and sacrifices made by our players, Club staff and MLB staff to protect one another. We will do so again, together, as we work towards playing another safe and entertaining season in 2021.”