May 13, 2021; Denver, Colorado, USA; Logos for the 2021 MLB All-Star Game are on display during the fourth inning of the game between the Colorado Rockies and the Cincinnati Reds at Coors Field. Mandatory Credit: Isaiah J. Downing-USA TODAY Sports

A pro-business group based in Texas, the Job Creators Network, has filed a federal lawsuit against Major League Baseball for moving the All-Star Game out of Atlanta, seeking $1 billion in punitive damages and $100 million in damages to local businesses.

In April, MLB announced it would move the event out of Truist Park, the home of the Atlanta Braves in Cobb County, in response to Georgia’s controversial new voting restrictions, passed earlier this year. Since then, the league has come under fire for the decision, primarily from conservative groups.

Claiming the league had no right to make the move, the Job Creators Network cited harm to local businesses as the reason for the lawsuit and demanded that the game be moved back to Atlanta.

“MLB robbed the small businesses of Atlanta — many of them minority-owned — of $100 million, we want the game back where it belongs,” said Alfredo Ortiz, president and CEO of the Job Creators Network.

The dollar figures on economic impact of an event like the All-Star Game can be tough to pin down. The impact for host Cincinnati in 2015 was about $60 million, according to MLB itself. Baseball Almanac reports a wide range of year-to-year dollar amounts, ranging from said $60 million in 2015 all the way up to $191.5 million for the game in New York in 2013. Last year’s event in Los Angeles brought an estimated $89 million to the city. 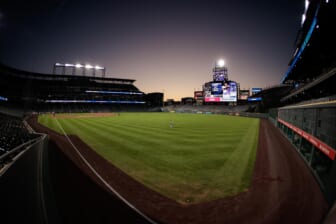 The most recent All-Star Game to be held in Atlanta reportedly generated $49 million, back in 2000.

The 2021 All-Star Game is currently scheduled to take place at Coors Field in Denver on July 13.