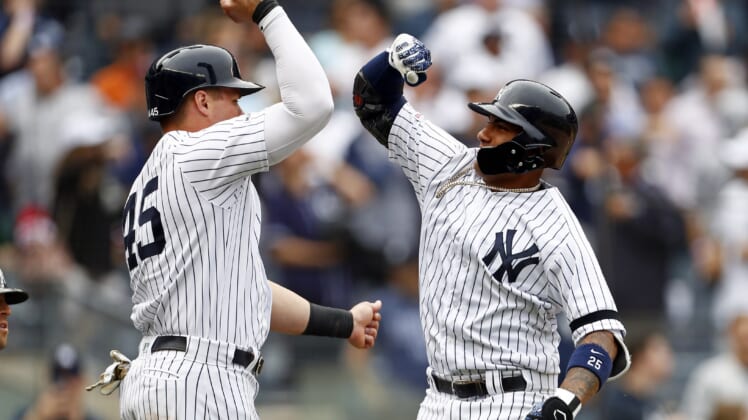 The opening two months of the MLB season have already given us a lot to talk about. As we look forward, there is a lot more to follow.

With Memorial Day in the rearview mirror, these are the top MLB storylines to watch for as we head into June.

The way Yelich hit in April and May gives him a chance to be MLB’s first 60-home run man since Bary Bonds (73) and Sammy Sosa (64) in 2001. There’s a long way to go, of course. So far he has 21 home runs in the first 55 games of the season — on pace for 62. In June, the Brewers are playing 16 of their 26 games at Miller Park, where Yelich has hit 17 of his home runs. That gives Yelich a chance to not only maintain his pace in June, but improve upon it. For opposing pitchers, that’s scary.

How will returning Bronx Bombers play?

From a long-term perspective, we really can’t say that the New York Yankees are better without Giancarlo Stanton, Aaron Judge, and their bevy of injured stars. Short term is a potentially different story. New York has really embraced the “next man up” mentality. So, the return of the stars could actually be a bad thing if they struggle to get back into the swing of things. Additionally, the Tampa Bay Rays have given the Yankees very little breathing room in the AL East. As these guys do start to come back, they’ll be under a lot of pressure to perform immediately.

Who will be buyers and sellers heading into trade season?

Presently, roughly half of the league’s teams can say fairly definitively that they’ll be either buying or selling at the deadline. The other half are in limbo. While the trade deadline has always been July 31, teams in limbo have been able to buy an extra month with the August 31 waiver deadline in the past. That’s gone now. Deals must be completed by July 31. It can also take time to gauge the market on a player. So, come July 1, it will be very important for a team to know whether it’s buying or selling. As such, what happens in June is quite vital.

Can the Nats salvage their season?

The Washington Nationals are a team in limbo. But the end of June will be a different story. If Washington hasn’t gotten it going by the halfway point of the season, we have to admit that it’s just a bad team with talented players. Therein lies the intrigue. A handful of Nationals figure to be key parts of postseason races. The question is, will that be with Washington, or elsewhere? What happens over the next month will do a lot to answer that question.

Are half of the division races really over?

Half of MLB’s divisions remain competitive. The other half is a different story. The, Astros, Dodgers, and Twins hold leads of 6.5, 8, and 10 in their respective divisions. Of course, we aren’t printing the Division Champion shirts just yet. There’s still an awful lot of baseball to play. Still, if these leads are still this big (or bigger) at the beginning of July, it’ll be awfully hard to imagine any other teams winning the AL West, NL West, and NL Central.

Jacob deGrom had an all-time great season in 2018 posting a 1.70 ERA. One year later, Ryu has been better. He has a 1.65 ERA and 0.83 WHIP. He’s done that with an 8.5 K/9 rate that, while good, is not elite – especially in this era. The pitchers who tend to do best in the playoffs are the ones that can pitch well even if they aren’t missing bats. Ryu is doing that. If he stays healthy and pitches close to this rate (even if there is some regression), he’ll be a big name to watch in October.

Will Philadelphia or Atlanta take control of the NL East?

Neither the Philadelphia Phillies (31-22) or Atlanta Braves (30-24) have been bad. But to a degree, both have underperformed, while no other NL East team has a winning record. As such, a good month of baseball could give the Phillies or Braves real control of the division. If that doesn’t happen, they’ll set up an interesting second half against each other. That would also keep the New York Mets (and even possibly the Nationals) alive in this race. That will make for a crazy final three months.

The high concentration of home runs this year is not limited to Yelich. League wide, MLB hitters are on pace to finish the year with 6,484 home runs. That would absolutely shatter the record set in 2017, which itself shattered the previous record. Keep in mind that we’ve seen a lot of cold-weather games through the first two months. Now, we’re heading into summer the warm weather that comes with it. That’s only going to contribute to more homers. So, don’t expect the current pace to hold in June. Expect to see it explode.

Play of the Indians

With the Nationals, it’s pretty easy. They need to go on a run in June or embrace being a seller in July. It’s a different story for the Cleveland Indians. While Minnesota winning the AL Central feels like a formality, Cleveland is only 2.5 games out of a wild card spot. If the Indians improve or even hold serve in June, they’ll be buyers in July. But if they slump in June and head into July five or more out the playoffs, the Corey Kluber and Trevor Bauer trade rumors that we heard in the offseason could well resurface.

Whether we’re talking about starters or relievers, it’s impossible to have too much pitching. To that end, one would be hard pressed to find a contender that shouldn’t be after Keuchel, Kimbrel, or both. Until they eventually sign, the free agencies of both men will remain a top MLB storyline. But if you’re tired of hearing about it, there is good news. Once the draft is over (it runs from June 3-5), teams will no longer have to worry about losing a pick as compensation. Where they’ll sign lingers as a huge question. The answer should come in June.