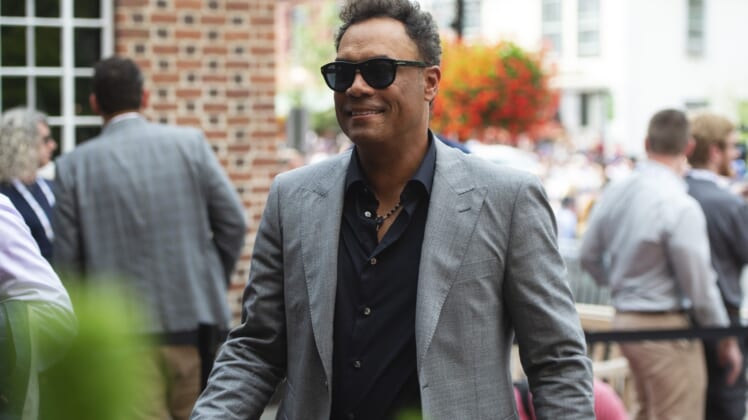 The Toronto Blue Jays and Major League Baseball are severing ties with Hall of Fame second baseman Roberto Alomar after an investigation into an allegation of sexual misconduct concluded Alomar “violated MLB policies.”

Commissioner Rob Manfred said Alomar’s employment as a consultant to MLB has been terminated and he has been placed on baseball’s ineligible list. Toronto said it is removing Alomar from its Level of Excellence and taking down his banner at Rogers Centre.

“At my office’s request, an independent investigation was conducted by an external legal firm to review an allegation of sexual misconduct reported by a baseball industry employee earlier this year involving Mr. Alomar in 2014,” Manfred said in a news release. “Having reviewed all of the available evidence from the now completed investigation, I have concluded that Mr. Alomar violated MLB’s policies, and that termination of his consultant contract and placement on MLB’s Ineligible List are warranted.

“We are grateful for the courage of the individual who came forward. MLB will continue to strive to create environments in which people feel comfortable speaking up without fear of recrimination, retaliation, or exclusion.”

Alomar issued a statement Friday afternoon, saying he was “disappointed, surprised and upset” by the decision.

“With the current social climate, I understand why Major League Baseball has taken the position they have,” Alomar said. “My hope is that this allegation can be heard in a venue that will allow me to address the accusation directly.

“I will continue to spend my time helping kids pursue their baseball dreams.”

Alomar was elected to the National Baseball Hall of Fame and Museum in 2011, garnering votes on 90 percent of the ballots in his second year of eligibility. That followed a career of 2,379 games, in which he hit .300 with 210 home runs, 1,134 RBIs and 474 stolen bases.