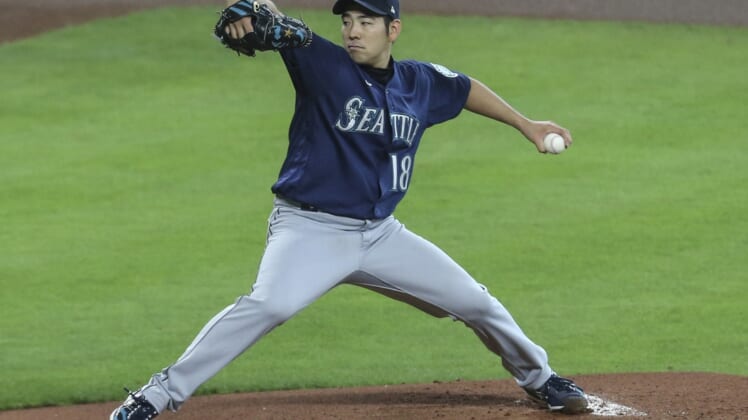 The game’s lone run scored on Taylor Trammell’s homer leading off the third inning as the Mariners salvaged the finale of a four-game series. It was only Seattle’s second victory in 21 games at Minute Maid Park since the start of the 2019 season.

Kikuchi (1-1), a left-hander, took a no-hitter into the seventh inning, but it was broken up when Carlos Correa doubled into the gap in right-center field with one out. Kikuchi made an outstanding defensive play for the second out on a Yuli Gurriel chopper off the plate — Kikuchi charged off the mound, made a sliding catch before the ball hit the ground again and popped back up to throw out Gurriel by a half-step.

Mariners left-hander Anthony Misiewicz pitched a 1-2-3 eighth — the last out coming on a diving catch by left fielder Sam Haggerty on a Straw liner.

The Cardinals earned a split in the four-game series while winning for the fifth time in seven games. The Phillies haven’t won back-to-back games since they opened the season with a four-game winning streak.

Cedric Mullins hit a game-winning sacrifice fly that was upheld via replay in the 10th inning and Baltimore edged visiting New York.

The Orioles salvaged a split of the four-game series after Cesar Valdez blew his second save by issuing two walks and allowing a tiebreaking ground-rule double to Gleyber Torres in the top half of the ninth when the Yankees were down to their last strike. Tanner Scott (1-2) stranded two in the 10th to pick up the victory.

The Yankees capped a respectable 5-3 road trip on a disappointing note by going 3-for-14 with runners in scoring position and stranding 12. Rougned Odor hit a two-run bases-loaded single in the fifth off Adam Plutko.

Eric Lauer threw five shutout innings in his season debut and Milwaukee beat visiting Los Angeles in the opener of a four-game series.

Travis Shaw hit a two-run homer with two outs in the fourth to account for the Brewers’ runs.

Dodgers starter Trevor Bauer (3-1) was trying to become the second National League pitcher to start 4-0 this season. He pitched eight innings in the opener of the 10-game road trip, allowing two runs and four hits while striking out six and walking two.

Jose Trevino hit a go-ahead, two-run home run in the sixth inning to lift Texas over visiting Boston in the opener of a four-game series.

Isiah Kiner-Falefa added a solo homer, his third of the year, in the seventh and Adolis Garcia also drove in a run for Texas. Rangers starter Kyle Gibson (3-0) held the Red Sox to one run on three hits with three walks and four strikeouts over six innings.

Rafael Devers had an RBI double for Boston. Perez was charged with two runs, one earned, on five hits and struck out seven over 5 2/3 innings for the Red Sox, whose three-game winning streak was snapped.

Matt Chapman doubled home Jed Lowrie with two outs in the top of the ninth inning, breaking a tie and giving Oakland a split of its four-game series with host Tampa Bay.

Right-hander Chris Bassitt and three relievers combined to five-hit the Rays, completing a low-scoring series in which the A’s won 2-1 and 3-2 games, sandwiching 4-3 and 2-0 defeats. Jake Diekman (1-0) picked up the win, and Lou Trivino recorded his fourth save.

Brandon Lowe homered and also scored on Austin Meadows’ double for the Rays. Diego Castillo (0-2) took the loss after allowing the winning run in the ninth.

Adbert Alzolay earned his first win of the season and visiting Chicago broke out of its offensive malaise to defeat Atlanta and snap a five-game losing streak.

Alzolay (1-2) pitched six innings and allowed two runs on four hits with one walk and six strikeouts to help the Cubs avoid their first four-game sweep against the Braves since July 2005. Alzolay also picked up his first major league hit.

The Cubs bounced back from enduring back-to-back shutouts and amassed 16 hits, with each player in the starting lineup getting at least one. Anthony Rizzo had three hits while Jason Heyward, Matt Duffy, Kris Bryant and Nico Hoerner each added two.

Carlos Rodon struck out 12 batters while winning for the fourth time in as many starts, Leury Garcia hit a two-run single, and Chicago downed visiting Detroit in the first game of a doubleheader, a makeup of a postponement on Wednesday.

Rodon only gave up two hits and a walk in six innings. Liam Hendriks pitched the seventh and final inning for his fifth save.

The White Sox enjoyed a rout in the nightcap. They pounded out 15 hits off six Detroit pitchers while Cease (1-0) permitted just three hits and fanned nine without a walk.

Matthew Boyd (2-3) lasted just three outs and 36 pitches before leaving with a knee injury during Chicago’s four-run second inning. Boyd gave up three hits and two runs with a walk and two strikeouts.

Eduardo Escobar’s RBI triple in the seventh inning gave Arizona its go-ahead run in a win over visiting Colorado.

Five of Arizona’s 12 hits went for extra bases, and eight of the hits occurred with two outs. David Peralta went 3 for 5 with two RBIs, Escobar was 2 for 5 with two runs and an RBI, and Josh Rojas was also 2 for 4 with his second home run of the season.