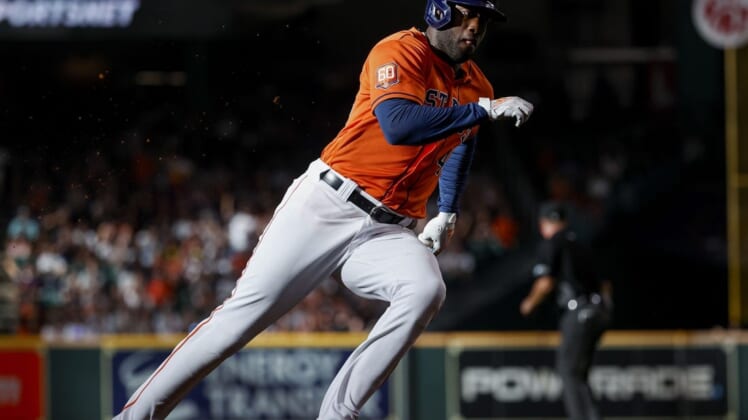 Yordan Alvarez homered and drove in three runs as the host Houston Astros held on for a 7-5 victory over the New York Yankees on Thursday night to complete a sweep of a day-night doubleheader.

Alvarez was activated from the injured list before the doubleheader after a brief absence due to an injured right hand. Alvarez hit his 27th homer against New York’s Domingo German (0-1) and added a two-run double. Alex Bregman also homered and hit an RBI single.

Chas McCormick contributed a two-run homer as Houston improved to 25-9 in its past 34 contests. The Astros won five of seven meetings in the season series with the Yankees, never trailing in any of the games until allowing game-ending hits to Aaron Judge on June 23 and 26 in New York.

Gleyber Torres hit a two-run homer and Aaron Judge hit a three-run shot in the ninth, but the Yankees lost for the seventh time in 10 games and dropped their fourth straight road contest.

Rookie J.J. Matijevic’s pinch-hit RBI single with two outs in the ninth inning lifted host Houston to a win against New York in the opener of a day-night doubleheader.

The Astros earned their fifth walk-off win after fill-in closer Hector Neris faltered in the top half of the ninth. Called upon after Ryan Pressly was placed on the paternity list before the game, Neris (3-3) was one out away from the save before Yankees pinch hitter Isiah Kiner-Falefa hit a game-tying single.

After Neris kept the game tied, Alex Bregman began the winning rally with a single and moved to third on a double by Aledmys Diaz. The Yankees intentionally walked pinch hitter Yordan Alvarez. One out later, Matijevic grounded to shortstop and second baseman Gleyber Torres, who was shifted into right field, was unable to cover second in time when Kiner-Falefa tried to get the forceout.

Frankie Montas returned from a shoulder injury to combine with five relievers on a four-hitter and Sean Murphy broke a scoreless tie in the sixth inning with a three-run home run, allowing Oakland to gain a doubleheader split with visiting Detroit.

Montas missed one start last week leading into the All-Star break after leaving his July 3 outing due to injury and was limited to 53 pitches in his return Thursday. He tossed three innings while striking out five. Ramon Laureano, Seth Brown and Dermis Garcia collected two hits apiece for the A’s.

Harold Castro’s double was the only extra-base hit for the Tigers, who were out-hit 10-4.

Robbie Grossman drove in three runs with a pair of two-out doubles, Tarik Skubal pitched six strong innings and Detroit opened the second half of the season with a victory over host Oakland in the opener of a doubleheader.

The A’s only run against Skubal (7-8) was the product of a Seth Brown double, a passed ball and a Stephen Piscotty sacrifice fly in the fifth.

The left-handed Skubal recorded his 10th straight decision (four wins, six losses) by limiting Oakland to two hits and two walks in his six innings. He struck out nine.