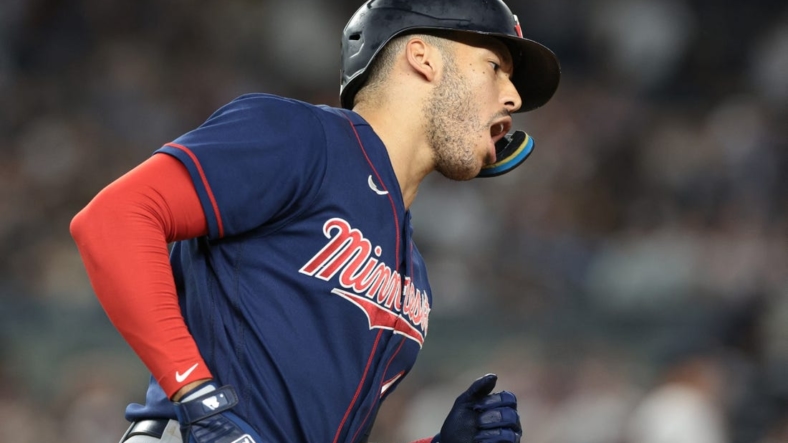 Carlos Correa hit a tiebreaking, two-run homer in the eighth inning as the visiting Minnesota Twins beat the New York Yankees 4-3 on Thursday to avoid a four-game sweep.

After Sonny Gray threw six innings of two-run ball, Griffin Jax (6-3) tossed one scoreless inning for the win. Michael Fulmer escaped a bases-loaded jam in the ninth inning for his third save.

Miguel Andujar hit a two-run homer for the Yankees, whose four-game winning streak ended. Wandy Peralta (2-4) took the loss as he was charged with an unearned run after recording two outs.

Brian Anderson hit a go-ahead RBI single off David Robertson in the ninth inning as Miami rallied for a victory at Philadelphia.

Lewin Diaz and Joey Wendle each hit a solo home run for the Marlins, who snapped a season-worst, nine-game losing streak.

Avisail Garcia had three hits and an RBI while Garrett Cooper hit two doubles with an RBI for the Marlins. Nick Maton hit a solo home run and Alec Bohm added a double, triple and two RBIs for the Phillies.

Alex Call went 4-for-5 with a home run and a career-high five RBIs as visiting Washington defeated St. Louis to earn a split of a four-game series.

Cesar Hernandez went 3-for-4 with three RBIs and Luke Voit went 2-for-3 with two walks and two runs for the Nationals, who won for the sixth time in nine games.

Yadier Molina hit two homers and drove in three runs for the Cardinals in his 324th start with pitcher Adam Wainwright. They tied Mickey Lolich and Bill Freehan for the most career major league starts as batterymates.

Corbin Burnes allowed just one run on three hits over eight innings with 14 strikeouts to pace Milwaukee to a win over visiting San Francisco in the first game of a doubleheader.

Burnes (10-6) hit one batter but did not walk anyone in his 100-pitch outing. Christian Yelich and Hunter Renfroe had RBI doubles for the Brewers, and Devin Williams pitched a perfect ninth for his 11th save.

The Milwaukee bullpen covered seven solid innings after Freddy Peralta departed with a shoulder issue as the Brewers completed a doubleheader sweep of visiting San Francisco.

Peter Strzelecki (2-1) got the win with two innings of scoreless relief. Taylor Rogers struck out the side in the ninth for his 31st save.

The Brewers led 4-0 before San Francisco scored single runs in the seventh and eighth. Joc Pederson homered for the Giants, who took their fourth loss in a row.

India had three hits for Cincinnati, which took two of three at Chicago to win a second straight series. Alexis Diaz (6-2) got the win in relief, and Ian Gibault earned his first career save.

Seiya Suzuki and Nico Hoerner each had a pair of hits for the Cubs, who have lost 13 of 18. Reliever Mark Leiter Jr. (2-7) took the loss.