MLB roundup: Stats, scores from May 8 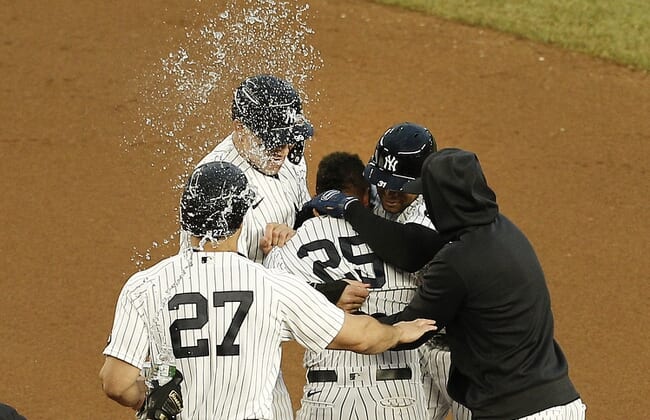 Gleyber Torres hit a bases-loaded infield single with no outs in the 11th inning, lifting the New York Yankees to a dramatic 4-3 victory over the visiting Washington Nationals.

With DJ LeMahieu on second base to start the 11th, Aaron Judge and Giancarlo Stanton drew walks off Tanner Rainey (0-2) to load the bases. Torres hit a soft high chopper a little over halfway down the third base line. Rainey moved in front of third baseman Starlin Castro to field the ball, but LeMahieu beat the off-balance throw home.

The Yankees struck out 14 times against Nationals starter Max Scherzer before twice tying the game against Washington closer Brad Hand.

The Nationals took a 3-2 lead in the 10th when Trea Turner lifted a sacrifice fly to right, but the Yankees tied the game on Mike Ford’s single off Hand.

Adrianza, who entered the game as a pinch hitter in the seventh inning and stayed in when Ronald Acuna Jr. was hurt while hit by a pitch, finished 3-for-3 with an RBI and a run. Acuna is day-to-day with a bruised left pinky.

The Braves, who trailed 7-4 going to the bottom of the 12th, tied it when Contreras lined a three-run double to left field against Enyel De Los Santos (0-1). Logan Webb (1-1) got the win despite yielding all three runs (one earned) in the top of the 12th.

Yadier Molina and Paul Goldschmidt drove in three runs each as St. Louis outlasted visiting Colorado to win for the eighth time in 10 games.

The Rockies lost for the 13th time in 15 road games this season and for the 24th time in their past 28 games at Busch Stadium.

Clayton Kershaw threw five shutout innings to bounce back from the shortest outing of his career, and the Dodgers nearly blew a 13-run lead before holding on for a win over the Angels in Anaheim, Calif.

The Dodgers snapped their four-game losing streak. Mookie Betts had four RBIs and Will Smith drove in three for the Dodgers, who batted around twice while totaling 13 runs over the fourth and fifth innings.

The Angels rallied from the 13-0 hole, scoring four times in the sixth, and Jose Rojas’ three-run homer highlighted a seven-run seventh that got the hosts within three.

Avisail Garcia also clubbed a two-run homer to help Milwaukee break its six-game losing streak, its longest skid since 2018. Garcia and Kolten Wong each went 3-for-5.

Miami had its season-high-tying, four-game winning streak snapped. Marlins leadoff batter Miguel Rojas homered in the first inning. It was the fourth consecutive game during which Rojas has scored a first-inning run, including two on homers.

Crawford hit a three-run shot to right-center off Joe Musgrove (2-4). Brandon Belt hit a solo shot in the fifth to make it 4-1. Austin Slater, who had a pinch-hit RBI single in the sixth, added a two-run homer in the eighth.

Gausman, who had been on the medical list following a reaction to his second COVID-19 vaccination, was activated earlier Saturday and gave up one run on three hits and a walk with seven strikeouts in six innings. He improved to 3-0 and lowered his ERA to 1.97.

Austin Allen added a solo homer for Oakland, which won for the fifth time in its past seven games. Frankie Montas (4-2) pitched into the sixth inning for the victory and Lou Trivino recorded the final four outs for his sixth save.

Biggio, Jansen and Semien helped Toronto to its 10th win in 15 games. Biggio socked a two-run blast to right field on the first pitch of his first at-bat against Cristian Javier (3-1) for his third home run of the season and his first at Minute Maid Park. His father, Craig, belted 79 homers at Minute Maid Park during his Hall of Fame career with the Astros.

Jansen, leading off the third, homered for a third consecutive game. The Blue Jays sent seven batters to the plate in that frame and stretched their lead to 5-0 when Houston native Randal Grichuk plated Semien and Vladimir Guerrero Jr. with a double to center.

Harold Castro also had three hits, Niko Goodrum had three RBIs and Michael Fulmer was the winning pitcher in relief, allowing one hit and striking out three in 2 2/3 scoreless innings for the Tigers.

Pinch hitter Matt Duffy drove in the go-ahead run in the seventh inning, and host Chicago held on for a win over Pittsburgh.

Willson Contreras and Eric Sogard also drove in runs for the Cubs, who won their fifth game in a row. Keegan Thompson (1-0) earned his first major league victory after pitching three scoreless innings. Craig Kimbrel handled the ninth inning for his sixth save.

Ka’ai Tom hit his first career home run, a two-run shot, to lead the Pirates at the plate. Pittsburgh has lost three in a row and eight of its past nine games.

Cesar Hernandez’s bases-loaded triple highlighted a four-run fourth inning, and Cleveland broke out a night after being no-hit for a victory over visiting Cincinnati.

Jose Ramirez — who had a two-run double during a three-run sixth — Jake Bauers and Josh Naylor each recorded two of the 11 hits for the Indians. Aaron Civale improved to 5-0 for Cleveland, tossing seven strong innings.

Ex-Indian Tyler Naquin’s ninth-inning homer was the offensive highlight for the Reds, which had won six of nine but has totaled six runs over the last four games. Luis Castillo (1-4), who gave up four earned runs in four innings, took the loss.

The White Sox hit for the cycle as a team against Lynch, with Moncada delivering a two-run double, Andrew Vaughn adding an RBI double, Leury Garcia providing a run-scoring triple and Moncada punctuating the rally with an RBI single against reliever Tyler Zuber. Lance Lynn (3-1) earned the win.

Jeff McNeil hit a two-run homer and Francisco Lindor scored once and drove in another to lead New York to a victory over visiting Arizona.

Joey Lucchesi (1-2), the second of five Mets pitchers, was credited with the win. He allowed one unearned run, two hits and one walk and struck out three in 3 1/3 innings.

Carson Kelly and Josh Rojas each had two hits for the Diamondbacks, which have lost five consecutive contests. Merrill Kelly (2-3) took the loss, allowing three runs (two earned) and three hits in 5 2/3 innings. He struck out six and walked five.

Michael Chavis punctuated his return to the majors with a two-run homer to cap a four-run second inning, sending visiting Boston off to the races in a rout of Baltimore.

Xander Bogaerts (3-for-4) added a two-run homer, Christian Vazquez (2-for-4) and Bobby Dalbec each drove in a pair and Alex Verdugo had a three-hit day for Boston. Red Sox right-hander Garrett Richards (2-2) earned the win after giving up four runs on eight hits with a walk and five strikeouts over seven innings.

Orioles left-hander Zac Lowther (0-1) lasted only 2 1/3 innings and gave up seven runs on seven hits with two walks and three strikeouts in his first major league start. Austin Hays (2-for-5) had two RBI and Freddy Galvis hit a solo home run for the Orioles.

Joey Gallo homered twice and Adolis Garcia added a solo shot and made the defensive play of the game as Texas held on to defeat Seattle in Arlington, Texas.

With Seattle trailing 9-7 in the ninth with runners at first and third and two outs, the Mariners’ J.P. Crawford blooped a single into shallow left field to score one run. The ball deflected off left fielder Willie Calhoun, but Garcia, playing center, was able to recover the ball and throw home to nab Kyle Lewis at the plate for the game’s final out.

Texas scored three times in the eighth to take the lead for good. John King (4-1) got the victory and Ian Kennedy escaped the ninth-inning jam for his 10th save of the season.