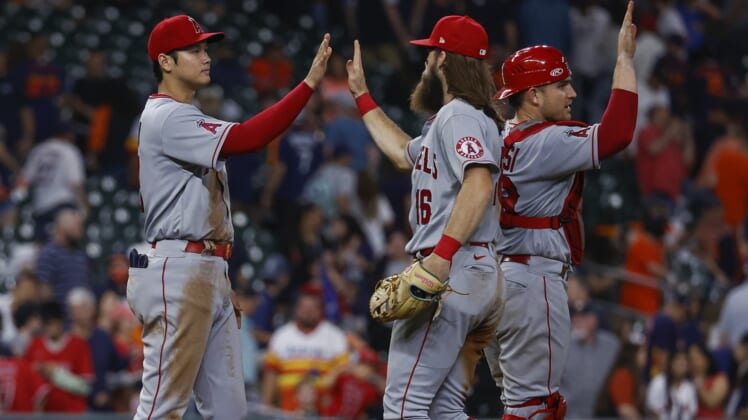 Shohei Ohtani carried a perfect game into the sixth inning and also played a central role with his bat in the first-inning uprising that keyed the visiting Los Angeles Angels’ 6-0 victory over the Houston Astros on Wednesday.

In the rubber match of a three-game series, Ohtani (1-2) retired the first 16 batters he faced in earning his first career win over the Astros, against whom he was 0-3 with a 5.92 ERA and 0-2 with a 6.50 ERA at Minute Maid Park. He threw 81 pitches, 55 for strikes, and rode a dominant slider to 12 strikeouts, tying his career high.

Ohtani was especially dominant through his first five innings, requiring only 60 pitches to retire the 15 batters he faced. His lone called third strike came against Kyle Tucker for the second out of the fifth on a splitter.

Ohtani recorded a leadoff walk, a two-run double and scored the first run in the Angels’ six-run first inning. Astros right-hander Jake Odorizzi (0-2) continued his early-season struggles by issuing four walks while recording only two outs, with the final free pass issued to Tyler Wade with the bases loaded.

Gonsolin (1-0) did not allow a hit until the sixth when Atlanta catcher Manny Pina legged out an infield single to foil a defensive shift. It was the only hit he allowed in a season-high six innings. Gonsolin struck out three, walked three and earned his first career win against the Braves.

Brandon Woodruff carried a no-hitter into the sixth inning as Milwaukee earned the win and completed a three-game sweep of visiting Pittsburgh.

Milwaukee broke it open in the bottom of the seventh thanks to a three-run homer from Keston Hiura. The Brewers had held a narrow 1-0 lead up to that point after Rowdy Tellez hit a solo shot in the second.

Cleveland used a nine-run second inning to pummel visiting Chicago in Game 1 of a doubleheader.

The Guardians took advantage of four errors by the White Sox, three by shortstop Tim Anderson, to deliver Chicago’s worst loss of the young season.

Cleveland sent 13 batters to the plate in the second and had eight consecutive hits. The Guardians scored nine consecutive runs before an out was recorded. That hasn’t happened for Cleveland since Sept. 23, 1936, also against the White Sox but in the second game of a doubleheader, according to Bally Sports Ohio.

Cleveland hung on for a victory in the nightcap of a doubleheader sweep over visiting Chicago.

Back-to-back doubles by Steven Kwan and Jose Ramirez handed Cleveland a 1-0 lead. Ramirez’s major league-leading 20th RBI of the season came on an 0-2 count. It was the 250th double of his career.

Cleveland starter Triston McKenzie, who struck out a franchise-record eight consecutive White Sox hitters on May 31, 2021, allowed one run on one hit in 4 1/3 innings. Reliever Anthony Gose (1-0) earned the victory with 1 2/3 innings of hitless relief. He fanned all four batters he faced. Losing pitcher Jimmy Lambert (0-2) allowed five hits, two runs and two walks in 3 2/3 innings. He struck out five batters.

Daulton Varsho homered and drove in three runs as visiting Arizona broke out of its early-season slumber with a rout of Washington.

Seth Beer went 3-for-4 with three RBIs for Arizona, which entered the game last in the majors in runs scored. The D-backs snapped a three-game skid while setting season highs in hits (10) and runs. Merrill Kelly (1-0) allowed one run on six hits over six innings.

Washington, which opened the series with a doubleheader sweep on Tuesday, fell behind 11-0 after five innings. Erick Fedde (1-1) allowed seven runs (six earned) on eight hits over 3 1/3 innings.

The Royals’ bullpen extended its scoreless innings streak to 17 2/3 innings. Kansas City scored the game’s only runs on a double-play groundout and a bunt single to clinch its first series win of the season, having taken the first two of a three-game set. It was the Royals’ first shutout of the Twins in 95 meetings since Aug. 20, 2016.

Lynch (1-1) allowed just four hits and a walk in five-plus innings. He struck out two and never allowed a runner to reach third base. Twins starter Chris Paddack (0-2) gave up solo runs in the first and fifth innings to pick up the loss during his five-inning stint.

Johan Camargo homered among his four hits, Nick Castellanos had three hits and a home run, and visiting Philadelphia beat Colorado in Denver.

Alec Bohm homered and singled while Kyle Schwarber also went deep for the Phillies. Brad Hand (1-0) got one out and Corey Knebel worked the ninth for his second save.

The win was the Padres’ fourth straight. The Reds have lost nine in a row and have gone 81 innings since they last held a lead after a complete inning.

Jorge Lopez worked out of an eighth-inning jam as the last of five pitchers who combined for a seven-hit shutout as Baltimore held on for a victory at Oakland.

The only run in the pitchers’ duel scored on a fifth-inning throwing error by Oakland shortstop Elvis Andrus.

Baltimore’s Jordan Lyles (1-1) struck out six in five scoreless innings. Lopez got the final five outs for his second save. A’s starter Daulton Jefferies (1-2) gave up the unearned run and fanned five in six innings.

Detroit’s Miguel Cabrera moved within one hit of 3,000 for his career but Anthony Rizzo led visiting New York to a victory.

Cabrera singled his first three times up, then struck out in the eighth against Clay Holmes. He’ll be looking for the historic hit in the series finale Thursday afternoon.

Rizzo homered and doubled, scored two runs and drove in two more, while Isiah Kiner-Falefa had two hits, a run scored and an RBI. Chad Green (1-1) got the win despite giving up two runs in one inning of relief, while Aroldis Chapman pitched the ninth for his third save.

Fernando Mejia hit a two-run home run in the first inning and drove in three runs as visiting Tampa Bay earned a victory over Chicago.

Jalen Beeks (1-0) pitched two scoreless innings of relief to earn the victory as the Rays won in a game halted in the sixth inning because of rain. The start time was moved up an hour with inclement weather in the forecast.

Nolan Arenado slugged a two-run homer in the ninth inning — just off the glove of left fielder Jorge Soler — to lead St. Louis to a win over host Miami.

Arenado’s blast against reliever Anthony Bender (0-2) came on a 0-1 pitch that was clocked at 99 mph. The Cardinals have won eight straight games over the Marlins, a streak that started last year. In those defeats, Miami has totaled just seven runs.

The Marlins’ offense was held to just five hits — all singles — and two walks. Miami got the leadoff man on base just once, on Garrett Cooper’s sixth-inning single. Miami starter Sandy Alcantara was brilliant, striking out six batters in eight scoreless innings. He allowed just four hits — all singles — and one walk while lowering his ERA to 1.86.

Berrios (1-0) held the Red Sox in check over six innings, allowing one run on eight hits with one walk and six strikeouts. The teams have split the first two games of the series, which wraps up Thursday afternoon.

The Red Sox started fast, taking a first-inning lead on Rafael Devers’ one-out double, and J.D. Martinez’s RBI single. The Blue Jays countered with a five-run second inning to take control. Red Sox starter Nick Pivetta (0-3) saw his ERA rise to 10.03 in three starts. He entered the night with a 5.77 ERA in seven starts against the Blue Jays.

Brandon Belt, celebrating his 34th birthday, homered in the second and Mike Yastrzemski added an RBI single in the fourth for the Giants, who were swept in Tuesday’s doubleheader.

The loss snapped a three-game winning streak for the Mets, who played without manager Buck Showalter after he underwent a medical procedure Wednesday. The club was managed by a committee of coaches. Rodon (2-0) allowed three hits and two walks while striking out eight.

Leadoff hitter Adam Frazier went 3-for-4 with two doubles for the Mariners, who won for the fifth time in their past six games. Despite turning a first-inning triple play, the Rangers took their fifth consecutive defeat.

Gilbert (2-0) allowed six hits, didn’t walk a batter and struck out four. The right-hander lowered his ERA to 0.54 over three starts. Rangers starter Dane Dunning (0-1) was charged with three runs on six hits in four-plus innings.