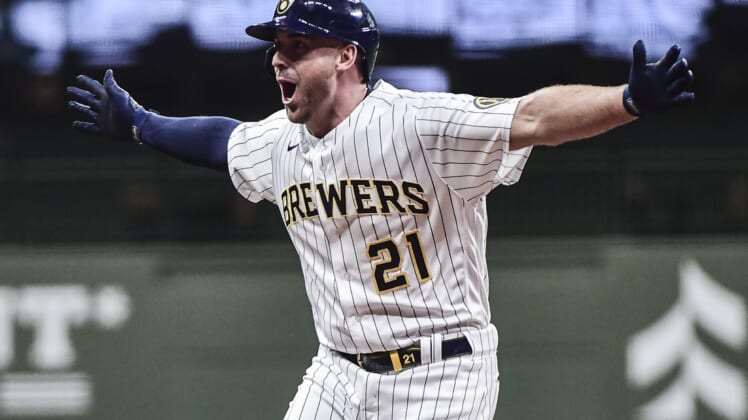 May 1, 2021; Milwaukee, Wisconsin, USA; Milwaukee Brewers third baseman Travis Shaw (21) reacts after driving in the winning run with a base hit in the eleventh inning against the Los Angeles Dodgers at American Family Field. Mandatory Credit: Benny Sieu-USA TODAY Sports

After Will Smith’s two-run triple put Los Angeles up 5-3 in the 11th, the Brewers loaded the bases with nob outs in the bottom of the frame.

Kolten Wong delivered a sacrifice fly and Avisail Garcia smacked a tying single with two outs. Then Shaw, who homered earlier in the contest, lined a shot to right field off Mitch White, the Dodgers’ 10th pitcher of the night, to cap the comeback and send Milwaukee to its ninth victory in 12 games.

The Dodgers not only fell for the 10th time in 13th games, but they lost starting pitcher Dustin May to a right arm injury. May will undergo an MRI exam on his right elbow Monday in Chicago, Los Angeles manager Dave Roberts said postgame.

Jameson Taillon allowed one run in five effective innings for his first win in exactly two years, and Aaron Judge drove in three runs, including a tiebreaking RBI double in the fifth inning, as host New York beat Detroit for its seventh win in 10 games.

Taillon (1-2) allowed three hits in the longest of his five outings with the Yankees and did not allow a hit until Jeimer Candelario homered with two outs in the fourth. He struck out eight and walked three in his first win since beating the Texas Rangers on May 1, 2019, for the Pittsburgh Pirates.

A little over three months later, Taillon underwent his second Tommy John surgery and then refined his mechanics during a lengthy rehab.

With the bases loaded, Grichuk hammered an 0-1 slider from Nate Jones (0-2) for the game-winner for the Blue Jays, who are 6-2 in their past eight games. George Springer went 2-for-5 with three RBIs and hit his first two home runs as a Blue Jay.

Atlanta’s Cristian Pache connected for his first career home run, a grand slam. Ronald Acuna Jr. went 2-for-4 with a homer and double for the Braves, who lost their third straight.

Willie Calhoun hit a go-ahead, two-run home run in the sixth inning and Texas held off Boston in Arlington, Texas.

Isiah Kiner-Falefa homered and tripled among three hits as the Rangers won for just the third time in their last nine games. Calhoun also had three hits.

Hunter Renfroe hit a two-run homer for the Red Sox, who lost for only the second time in their last six.

Conforto also doubled, drove in three runs and scored twice. He has 21 homers in his career against the Phillies. Pete Alonso and Dominic Smith had two hits apiece for the Mets.

Lance Lynn (2-1) pitched five workmanlike innings to help the White Sox even the series at one win apiece. Lynn allowed three runs on four hits while walking two and striking out two.

Yu Chang finished 1-for-3 with two RBIs and Austin Hedges had a solo home run for Cleveland, which lost for only the second time in the past six games.

Perez’s two-run blast in the third inning was the 18th of his career in Minnesota. He was tied with 17 home runs by a non-Twin with current teammate Santana as well as Edwin Encarnacion.

A solid performance by pitcher Matt Harvey and a six-run third inning at the plate lifted Baltimore over host Oakland for its third straight win.

The Orioles have won five of their past seven in clinching the three-game series against the Athletics. Oakland has lost four of its past five.

Harvey (3-1) was dominant at times. He allowed two runs on four hits with three walks and one strikeout in 5 2/3 innings.

Nico Hoerner reached base four times and singled home the go-ahead run in the sixth inning as visiting Chicago evened the three-game series against Cincinnati.

Rex Brothers (1-0) struck out the side in the fifth inning and Craig Kimbrel stranded two runners in the ninth for his fifth save as Chicago won for the second time in its past eight games.

Tyler Stephenson had two hits for Cincinnati, which dropped to 3-9 over its past 12 games. The Reds had two on with no outs in the ninth before Kimbrel struck out Alex Blandino and Tyler Naquin. Nick Castellanos then grounded out to end the game.

After Lance McCullers Jr. fired seven scoreless Friday night in the series opener, Urquidy (2-2) struck out five, walked one and limited the Rays to four singles. He threw 91 pitches, 68 of them for strikes.

Alex Bregman began the scoring with an RBI single and scored on Gurriel’s hit, more than enough runs for Urquidy as the Astros clinched the series win.

Bryan Reynolds hit an RBI double, Colin Moran had a pair of RBI singles and Gregory Polanco an RBI base hit for Pittsburgh, which has dropped three in a row.

After giving up Machado’s fourth homer of the season, DeSclafani faced the minimum number of hitters through six innings. DeSclafani (2-1) took the loss despite allowing three hits and two walks with three strikeouts in six innings. The right-hander’s ERA climbed from 1.50 to 2.00.

Blake Snell picked up the win, his first decision in six starts as a Padre. Snell worked five innings, allowing two runs (one earned) on five hits and three walks with six strikeouts.

Colorado produced a seven-run eighth inning, capped by Dom Nunez’s grand slam, as part of an awakening at the plate in a win over Arizona in Phoenix.

The Rockies, now 2-10 on the road, had scored only 26 runs through their first 11 games away from Coors Field entering play Saturday.

They produced 18 hits, including four from Raimel Tapia and three from Trevor Story, who socked a two-run homer.

Angels right-hander Griffin Canning (2-2) pitched 5 1/3 innings and allowed just three hits and an unearned run. He walked two and struck out nine, one shy of his career high.