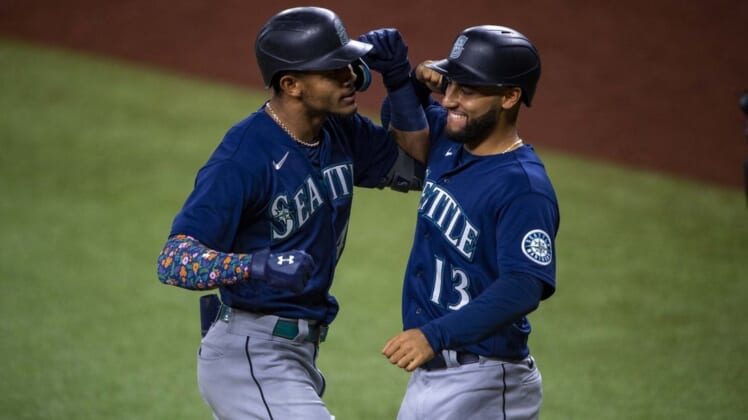 Rookie Julio Rodriguez belted a grand slam to highlight his five-RBI performance, fueling the visiting Seattle Mariners to their 12th straight victory, an 8-3 decision over the Texas Rangers on Friday in Arlington, Texas.

Seattle starter Robbie Ray (8-6) matched a season high by striking out 12 batters. The reigning American League Cy Young Award recipient allowed three runs on six hits in 6 2/3 innings to improve to 4-0 in his past eight starts.

Rodriguez, Jesse Winker, Cal Raleigh and Adam Frazier finished with two hits apiece for the Mariners, who have the second-longest winning streak in franchise history. Seattle won 15 consecutive games in 2001.

Texas’ Corey Seager continued to tune up for the upcoming Home Run Derby by going deep for the seventh time in his last 10 games. Leody Taveras belted a two-run shot in the seventh inning for the Rangers, who fell to 2-6 against Seattle this season.

Kershaw (7-2) retired the first 21 batters before Angels cleanup hitter Luis Rengifo hit a slider on a 2-1 count into the left field corner for a double. Kershaw wound up throwing eight shutout innings, allowing one hit and no walks while striking out six.

Will Smith (4-for-4 with three runs) and Justin Turner (3-for-5 with four RBIs) led the Dodgers’ offense. Angels starter Patrick Sandoval (3-5) gave up four runs (two earned) in 4 2/3 innings.

Mike Yastrzemski capped a six-run explosion off Milwaukee closer Josh Hader with a walk-off grand slam in the bottom of the ninth inning, giving host San Francisco a dramatic victory.

The homer was the third of the inning by the Giants off Hader (0-4), who took over at the start of the frame with a 5-2 lead. The left-hander gave up solo shots to Joey Bart, his sixth, leading off and Darin Ruf, his eighth, with one out.

The long ball was Yastrzemski’s ninth of the year, and it gave the Giants their fifth walk-off win of the season. The walk-off loss was Milwaukee’s fourth of the season and second in three days.

The streak was Baltimore’s longest since a 13-game stretch in 1999. The Rays, meanwhile, earned their fifth win in a row.

Matt Wisler (3-3) earned the win with one scoreless inning in relief, and Brooks Raley handled the ninth for his sixth save. Ramon Urias homered twice for Baltimore, and Trey Mancini collected three hits, including a homer.

Brendan Rodgers homered and matched his season best of four RBIs and Elias Diaz equaled his season high of three runs driven in as Colorado rolled past Pittsburgh in Denver.

C.J. Cron smashed his 21st homer to help Colorado win its fourth straight game and seventh in its last nine. Charlie Blackmon had three hits and two RBIs as the Rockies collected 17 hits and matched their season best for runs. German Marquez (6-7) gave up two runs in 6 2/3 innings while winning his second straight start for Colorado.

Xander Bogaerts scored on a wild pitch by Michael King with two outs in the 11th inning as Boston snapped a four-game losing streak by defeating host New York.

King (6-2) was one strike away from stranding Bogaerts at third, but he bounced an 0-2 slider to Bobby Dalbec in the dirt. The ball popped in front of the plate and Bogaerts immediately took off. King was a little slow in covering the plate, and Bogaerts scored on a head-first slide.

Tanner Houck (5-3) committed a throwing error on a bunt by Isiah Kiner-Falefa that allowed Gleyber Torres to score the tying run in the ninth. After blowing a save for the first time this season, Houck got double plays on Jose Trevino in the ninth and Torres in the 10th to keep the game tied. Ryan Brasier struck out Aaron Hicks to end his first save of the season as the game hit the four-hour mark.

J.T. Realmuto beat his former team with a go-ahead RBI double in the seventh inning off All-Star Sandy Alcantara as Philadelphia rallied to defeat host Miami.

Realmuto went 3-for-4 as the Phillies snapped a four-game losing streak. Kyle Gibson (5-3) earned his first win since June 10. He allowed four hits, one walk and one run in six innings, striking out five.

Alcantara (9-4), who carried a one-hit shutout into the seventh, took just his second loss over the past two months. He allowed four hits, two walks and two runs in eight innings, while striking out 12. He also went at least seven innings for the 13th straight game.

Darvish (8-4) yielded five hits and two walks while striking out nine on a season-high 114 pitches. Taylor Rogers pitched a perfect ninth to pick up his 25th save.

Ketel Marte and Christian Walker homered for the Diamondbacks. Madison Bumgarner surrendered five runs (four earned) in five innings to fall to 0-3 vs. the Padres this year.

Irvin (4-7) yielded one run on three hits and a walk in six innings. He struck out four. Elvis Andrus highlighted the Athletics’ seventh-inning rally with a two-run single.

Astros starter Jose Urquidy (8-4) gave up three runs on six hits and no walks in 6 1/3 innings. He fanned nine.

Matt Olson added three RBI singles for the Braves, who won their eighth straight game against the Nationals. Starter Ian Anderson (8-5) allowed one run on five hits and three walks in 5 1/3 innings. He struck out five.

Josh Bell had three hits for the Nationals, who have lost eight straight and 14 of 15. They own the worst record in baseball (30-62) with two games remaining before the All-Star break.

Teoscar Hernandez and Matt Chapman each hit a three-run home run and host Toronto defeated depleted Kansas City to even the four-game series at one win apiece.

Chapman and Raimel Tapia each had three hits to lead a 16-hit attack for the Blue Jays. Right-hander Alek Manoah (10-4) allowed one run and four hits in seven innings. He hit two batters with pitches, but walked none and struck out six.

Josh Naylor’s sacrifice fly drove in the tying run, and Gimenez blooped a single in front of Detroit left fielder Robbie Grossman to score Kwan. Gimenez is now 28-for-73 (.384) this year with runners in scoring position.

Michael Kopech (3-6) picked up his first win in seven starts, grinding his way through five innings and allowing two runs on five hits. He walked four and struck out two. Alex Kirilloff had a two-run double, and Byron Buxton went 2-for-3 with a walk and a run for Minnesota.

Donovan went 2-for-3 with a sacrifice fly and a two-run single. Dylan Carlson hit an RBI double, drew three walks and scored twice. Cardinals starting pitcher Andre Pallante (3-4) allowed three runs on six hits in five innings. Ryan Helsley worked out of a bases-loaded jam in the ninth inning to earn his eighth save.

Starting pitcher Hunter Greene (3-11) allowed four runs on five hits in five innings for the Reds, who took just their second loss in eight games. He struck out six batters and walked three.