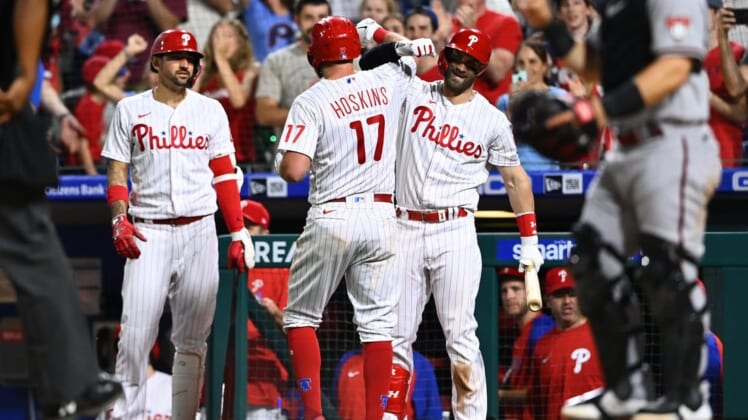 Rhys Hoskins homered twice, Kyle Schwarber hit a three-run home run and the host Philadelphia Phillies defeated the Arizona Diamondbacks 7-5 on Friday for their eighth win in a row.

Corey Knebel threw a scoreless ninth inning for his 11th save in 14 opportunities. Daulton Varsho led the Diamondbacks with a home run, a double, a single and three RBIs. Josh Rojas added a two-run double.

Darin Ruf homered twice and added an RBI single as San Francisco opened a three-game series against visiting Los Angeles with a victory.

Joc Pederson had two hits and two RBIs for San Francisco. Starter Jakob Junis (4-1) yielded two runs on five hits over five-plus innings. He walked one and struck out five before exiting with a left hamstring strain after throwing one pitch in the sixth inning.

The Dodgers’ loss was compounded by the fact that starter Walker Buehler (6-3) exited after four innings due to right elbow discomfort. Buehler allowed three runs on four hits with no walks and six strikeouts while throwing 70 pitches. Gavin Lux homered for Los Angeles.

Bobby Dalbec, a Seattle native, homered leading off the seventh inning to break a tie and lead Boston past host Seattle for its seventh win in eight games.

J.D. Martinez also went deep for the Red Sox. Dalbec greeted reliever Andres Munoz (1-3) by hitting a 2-1 pitch over the left field wall for his fourth homer of the season, putting the Red Sox up 3-2.

Jesse Winker homered for Seattle, which is 0-5 against Boston this season.

Byron Buxton homered twice for the second straight game and scored three times to lead Minnesota to a victory over Tampa Bay in Minneapolis.

Buxton, who also went deep twice on Thursday in the Twins’ 10-7 loss to the New York Yankees, became the fifth player in franchise history to have consecutive multi-homer games. He joined Harmon Killebrew, Don Mincher, Kirby Puckett and Eddie Rosario.

Minnesota’s Carlos Correa had a homer, a double and a single to go along with two RBIs and two runs. Randy Arozarena hit an inside-the-park home run and Isaac Paredes and Vidal Brujan also homered for Tampa Bay, which had a three-game win streak snapped.

Trevino gave the Yankees their 13th win in 16 games when he lined a 1-1 sinker from Alec Mills (0-1) over the leaping try of shortstop Nico Hoerner into left to score automatic runner Joey Gallo from third.

Ron Marinaccio (1-0) stranded two in the top of the 13th for his first career win. Gleyber Torres hit his 11th homer to start the fourth for New York, while Jason Heyward hit his first of the year to open the fifth for Chicago.

Josh Bell’s three-run home run in a four-run sixth inning led a rare huge outburst from Washington in a victory over visiting Milwaukee.

Nelson Cruz, who homered, rapped four of the National’s 19 hits, Lane Thomas had three more and scored three times, and Maikel Franco and Keibert Ruiz also homered as Washington snapped a three-game losing streak and opened a homestand on a positive note a night after finishing a 3-7 road trip.

Nationals starter Erick Fedde (4-4) went 5 2/3 innings and allowed three runs on four hits with three walks. He struck out four. The Brewers lost their seventh game in a row despite a home run and three RBIs from Jace Peterson and three hits from Andrew McCutchen.

Host Cleveland erupted for three runs in the bottom of the ninth to stun Oakland, which lost its 10th consecutive game.

After A’s starting pitcher Paul Blackburn was sensational through eight innings, Oakland manager Mark Kotsay turned to his struggling bullpen. Guardians All-Star Jose Ramirez opened the ninth with his 16th homer, and sacrifice flies by Owen Miller and Luke Maile drove in the other runs.

Guardians left-hander Anthony Gose (2-0) pitched a perfect top of the ninth for the win. Blackburn recorded the longest outing by an Oakland starter this season. He threw eight innings and allowed four hits, no runs and one walk. He struck out three, and he retired 17 of the last 18 batters he faced.

Jose Berrios carried a shutout into the eighth inning and Toronto had five extra-base hits in the first two innings while rolling to a victory over host Detroit.

The Blue Jays’ George Springer had three hits, including a homer, scored three runs and drove in two before being removed for a pinch hitter.

Bo Bichette and Lourdes Gurriel Jr. each supplied a solo homer and run-scoring double for Toronto. Alejandro Kirk also knocked in two runs as Toronto collected its 12th victory in the past 15 games.

The hard-throwing right-hander allowed four hits, one walk and matched a career high with eight strikeouts. Strider (2-2) left with two outs and runners on the corners in the sixth inning. Left-hander Dylan Lee struck out Cal Mitchell to end the threat. Kenley Jansen pitched a scoreless ninth to earn his 17th save.

Dansby Swanson had three hits, including a homer, and drove in two runs for the Braves.

Yasmani Grandal ripped a two-run double to ignite a five-run uprising with two outs in the eighth inning to lift host Chicago over Texas.

Jake Burger legged out an infield single off John King (1-2) with two outs in the eighth and advanced to second on a hit from Yoan Moncada. Grandal, who had an RBI single in the second inning, brought both runners home on a shot to right field to give Chicago a 5-3 lead.

Kendall Graveman (2-1) picked up the win despite allowing Corey Seager’s game-tying homer with two outs in the top of the eighth inning. Nathaniel Lowe and Adolis Garcia also homered for the Rangers, who have lost seven of their last nine games.

Musgrove (7-0) held the Rockies to four hits and two walks while striking out eight. Manny Machado homered, Jake Cronenworth had a two-run double to give him 17 RBIs in his past six games, and Jurickson Profar had an RBI for the seventh game in a row.

Rockies starter Chad Kuhl (4-3) gave up five runs on eight hits and five walks with a strikeout in 4 1/3 innings.

Marlins starter Pablo Lopez exited after he was struck on the right (throwing) wrist by a Michael Brantley line drive in the fifth inning. X-rays came back negative.

Cole Sulser (1-3) earned the win in relief. Tanner Scott recorded his fourth save with a perfect ninth. Brantley and Kyle Tucker homered for the Astros, and Yordan Alvarez had three hits.

Brandon Nimmo homered, doubled and drove in three runs to lead New York to a victory over Los Angeles in Anaheim, Calif.

Mark Canha (three RBIs), Eduardo Escobar and Jeff McNeil added two hits apiece for the Mets. David Peterson (3-0) got the win in relief of Tylor Megill, who returned from the injured list to toss 3 1/3 innings of two-run ball.

Brandon Marsh homered twice to drive in all of the Angels’ runs. Jhonathan Diaz (1-1), called up from the minors to start, yielded three runs in 1 2/3 innings.

Salvador Perez had a home run, a double and three RBIs as host Kansas City defeated Baltimore to match a season high with their third straight win.

In his second start after making 17 relief appearances, Pallante (2-0) allowed four hits and two walks while striking out four in 5 1/3 innings. Genesis Cabrera followed with 1 2/3 innings, Giovanny Gallegos worked the eighth inning and Ryan Helsley tossed a 1-2-3 ninth inning for his fourth save.

Reds starting pitcher Luis Castillo (2-4) allowed two runs, one earned, on six hits in six innings. He walked one and fanned three. The Reds lost for the sixth time in eight games.