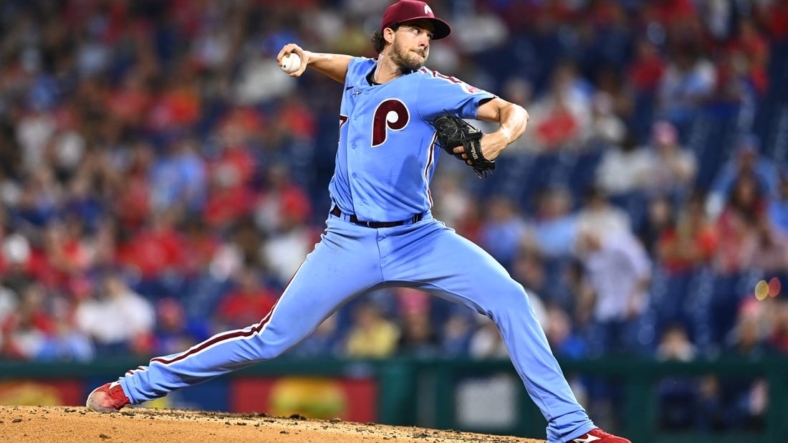 Aaron Nola tossed a five-hit shutout, guiding the host Philadelphia Phillies over the Cincinnati Reds 4-0 on Thursday to complete a four-game sweep.

Kyle Schwarber hit a solo home run to open the scoring. Edmundo Sosa added a single, a sacrifice fly and three RBIs, and Bradley Zimmer had two hits for the Phillies, who have won five of six.

Justin Dunn (1-2) allowed four hits and two runs in six innings for the Reds, who had won three of their past four games before arriving in Philadelphia.

The Mets snapped a two-game losing streak as deGrom (3-1) allowed one run on three hits and walked one while striking out nine. Adam Ottavino earned his first save with a 1-2-3 ninth.

Ryan McMahon homered in the sixth for the Rockies, who have lost eight of 11. Ryan Feltner (2-5) gave up three runs on six hits with two walks and two strikeouts in 4 2/3 innings.

Trey Mancini capped a four-run first inning with a three-run home run as Houston finished off a three-game sweep of visiting Minnesota.

The Astros won their fourth game in a row and wound up 6-0 vs. the Twins this year. Minnesota is mired in a season-worst, six-game skid.

The Rays had just seven hits in all but made the most of them. Margot laced a double and a triple and had two RBIs, Isaac Paredes hit a two-run homer and Harold Ramirez contributed a two-run single and an RBI fielder’s choice.

Rays starter Drew Rasmussen (9-4) gave up a solo homer to Taylor Ward but no other runs in 5 1/3 innings. The Rays extended their winning streak to six in a row, while the Angels lost six their straight.

Goldschmidt had three hits while posting the 23rd multi-home run game of his career. Tommy Edman and Corey Dickerson also had three hits apiece for the Cardinals, who took three of five in the series.

St. Louis played without star Nolan Arenado, who returned home for the birth of his first child. Ian Happ had two doubles, a single and two RBIs for the Cubs.

Gonzales (9-12) limited the Guardians to one run on four hits. The left-hander walked one and struck out four.

Mariners All-Star first baseman Ty France left the game in the third inning after sustaining a right calf bruise on a collision with Jose Ramirez in the first.

Kyle Stowers belted a game-tying solo homer with two outs in the ninth inning and Anthony Santander had an RBI single in the 11th to fuel host Baltimore to a victory over Chicago.

The White Sox appeared poised to pick up the win. However, left fielder Adam Engel — who entered the game as a defensive replacement — dropped a fly ball in foul territory off the bat of Stowers in the ninth. Given new life, Stowers belted an 0-2 curveball from Liam Hendriks for his first career homer.

Baltimore quickly put runners on the corners in the 11th inning before Santander sent a deep fly ball to center field off Jake Diekman (5-3) that allowed Cedric Mullins to score the winning run.

A fielder’s-choice grounder by George Springer in the 10th inning brought home the winning run as visiting Toronto beat Boston to sweep a three-game series.

Toronto left two runners aboard in both the eighth and ninth before scratching out a run in the 10th. Cavan Biggio, who began the 10th at second base, took third on a groundout, then came home on Springer’s grounder to shortstop Xander Bogaerts, evading the tag of catcher Kevin Plawecki.