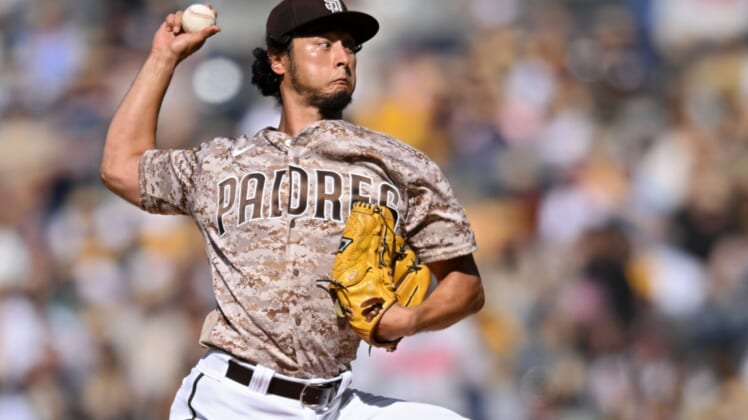 Yu Darvish held Atlanta to a solo homer by Marcell Ozuna over 6 2/3 innings Sunday night and San Diego took advantage of some early wildness by rookie Braves right-hander Bryce Elder to give the Padres a 2-1 victory over visiting Atlanta and a split of their four-game series.

Both Padres runs came in the second. Infielders Ha-Seong Kim and C.J. Abrams, the Padres’ No. 8 and 9 hitters, started the rally with back-to-back singles with one out. Elder then walked Trent Grisham on four pitches to load the bases and hit Austin Nola with a pitch to force home the Padres’ first run. Abrams scored on an infield grounder.

Coming off one of the worst performances of his career, when he gave up nine runs on eight hits and two walks in 1 2/3 innings, Darvish (1-1) held the Braves to the one run on four hits and no walks with eight strikeouts.

Elder (1-1), who survived a bases-loaded threat unscathed in the first inning, gave up the two runs on three hits and five walks with three strikeouts in 4 1/3 innings.

The Orioles loaded the bases with two outs against Jonathan Loaisiga (0-1) before Odor entered as a pinch-hitter and broke a scoreless tie with a single to center field. Lucas Luetge replaced Loaisiga to face Gutierrez, who delivered a two-run double to left field. Jorge Mateo capped the rally with an RBI single.

Xander Bogaerts went 3-for-4 with the RBI single that started the scoring in a sixth-run eighth inning on the way to a Boston victory over visiting Minnesota.

Rafael Devers extended his hitting streak to all nine games this season on a 2-for-4 day with two runs scored for the Red Sox, who have won four of their last five games. Bogaerts also scored two runs while J.D. Martinez and Trevor Story both drove in two.

Boston starter Michael Wacha was strong despite not factoring into the decision, striking out five while allowing no runs, one hit and two walks in five innings.

Matt Brash was effectively wild over 5 1/3 innings to earn his first major league victory as host Seattle defeated Houston in the rubber match in the three-game series.

Ty France hit a three-run home run for the Mariners, who scored five in the fourth inning to break the game open. Brash (1-1), a right-hander, allowed only two hits and two runs but walked six while striking out five. His defense turned four double plays.

Michael Brantley homered and drove in both runs for Houston. He also had two of the team’s four hits. Astros starter Jose Urquidy (1-1) went four innings and allowed six runs on eight hits, with one walk and two strikeouts.

Freeman also drove in three runs for the Dodgers, who extended their winning streak to six games and swept a four-game series from Cincinnati for the first time since 1975. Chris Taylor and Max Muncy knocked in two each, but Trea Turner saw his hitting streak end at 27 games, the third-longest in Dodgers history.

Heaney (1-0) struck out 11 and walked three. Reds starter Tyler Mahle crumbled in the fourth inning after three scoreless innings, allowing all seven runs. He went 3 2/3 innings with seven hits, two walks and five strikeouts. The Reds’ run came on a Tyler Naquin single in the eighth.

Michael Chavis and Ben Gamel each hit RBI singles to help Pittsburgh come from behind to down visiting Washington and win three of four in their series.

Diego Castillo and Yoshi Tsutsugo also had an RBI each for the Pirates, who erased an early three-run deficit. Pittsburgh starter Jose Quintana went four innings, giving up three runs and five hits. Heath Hembree (1-0) pitched 1 1/3 scoreless innings, and David Bednar pitched the ninth for his first save.

Victor Robles hit a two-run single while Riley Adams had an RBI single for the Nationals. Washington starter Patrick Corbin gave up two runs and three hits in 5 1/3 innings, but Steve Cishek (0-1) allowed three runs, three hits and a walk in one-third of an inning.

Manoah (2-0) allowed four hits, two walks and a hit batter while striking out six in the finale of a three-game series. Jordan Romano converted his 29th straight save opportunity dating to last season.

Thairo Estrada, who entered the day batting just .207, homered and drove in four runs to lead visiting San Francisco to its fifth consecutive victory and a series sweep over Cleveland.

Estrada jumped on Guardians starter and loser Aaron Civale for a two-run homer in the second inning. Wilmer Flores doubled off the center-field wall, and Estrada followed with his second home run of the season.

Chisholm knocked in three runs, and Rojas, Jesus Sanchez and Joey Wendle each had two RBIs as the Marlins won three of four games in the series.

Bryce Harper went 3-for-5 with a solo homer and an RBI double for the Phillies, who have lost five of their past six games. Zack Wheeler (0-2) allowed eight hits, three walks and seven runs in three-plus innings. He struck out three and ran his ERA to 9.39.

Tampa Bay played like the team that won 100 games and the American League East title in 2021, more than enough to secure a victory over host Chicago.

The Rays, who had 12 hits, scored four runs in the first inning and four in the eighth after tallying just four combined runs in the previous two games. Kevin Kiermaier and Francisco Mejía drove in two runs apiece to lead Tampa Bay on Sunday.

The Rays also got a strong performance with their by-committee pitching, which gave up only three hits. That allowed the Rays, who had lost five of their previous six games, to avoid a three-game sweep by the White Sox.

Eduardo Escobar’s hustle double sparked a three-run sixth-inning outburst by New York, which went on to beat visiting Arizona in the finale of a three-game series.

J.D. Davis and James McCann collected RBIs later in the sixth and Pete Alonso remained red-hot as a designated hitter by hitting a two-run homer in the seventh for the Mets, who have opened the season with seven wins in 10 games.

Five pitchers combined on the five-hitter for the Mets, with Chasen Shreve (1-0) earning the win by tossing two perfect innings.

Tyrone Taylor drove in two runs with a bases-loaded double and Josh Hader notched his 100th career save as host Milwaukee held off St. Louis to gain a split of the four-game series.

Taylor’s double put Milwaukee up 6-3 in the seventh. He and Andrew McCutchen each had two hits for the Brewers. Jake Cousins (2-0) got the victory in relief of Aaron Ashby with a scoreless fifth inning. It was Hader’s fourth save in as many tries this season.

Los Angeles got clutch hitting and a strong performance from its bullpen to beat Texas in Arlington, Texas, for its third win in a row.

Angels star Mike Trout was hit by a pitch on the back of his left hand, but X-rays were negative and Trout is listed as day-to-day. Trout had one of the Angels’ seven hits with runners in scoring position, an RBI double in the third inning that put the Angels up for good.

Tyler Wade had two hits with runners in scoring position and Los Angeles had 10 hits in all, including three by Matt Duffy. Three Angels pitchers combined to throw 4 2/3 scoreless innings of relief. Adolis Garcia homered for the Rangers.

Willson Contreras and Seiya Suzuki homered, Nick Madrigal had three hits and Chicago held on to beat Colorado in Denver.

Nico Hoerner and Yan Gomes had two hits each, Rowan Wick (1-0) tossed an inning of scoreless relief and David Robertson got the final three outs for his third save for the Cubs. Starter Drew Smyly gave up four hits, walked one and struck out four in 4 2/3 innings.