Rookie Ryan Mountcastle homered and drove in three runs, and the Baltimore Orioles defeated the visiting Yankees 6-3 in the second game of a doubleheader Friday night to end their 19-game, head-to-head losing streak against New York.

The Yankees beat the Orioles 6-5 in nine innings in the first game of the twin bill, New York’s 18th straight victory in Baltimore. The Yankees’ last loss at Camden Yards before Friday’s nightcap came on July 10, 2018.

The road winning streak was a franchise record for New York against any team. The Yankees just missed matching the longest head-to-head road winning streak vs. a single opponent, with the mark of 19 set by the Brooklyn Dodgers against the Cincinnati Reds from 1947 to ’49.

Jorge Lopez (1-0) pitched five innings and got the win for the Orioles, with all three runs he allowed being unearned. Cesar Valdez earned his first major league save by throwing two shutout innings.

In Game 1, Miguel Andujar and Clint Frazier each had RBI singles for the Yankees in the top of the ninth to give New York the victory.

Roman Quinn hit a strange tiebreaking single with two outs in the seventh inning and Philadelphia continued its surge with a victory over host New York.

The Phillies won their fifth straight game and improved to 10-1 in their last 11 games, thanks to Quinn’s odd hit.

After Phil Gosselin doubled with two outs and nobody on, Quinn hit a ground ball up the middle off Jared Hughes (1-2) that required shortstop Andres Gimenez to make a diving stop. As Gimenez lunged to his right, the ball caromed off his bare right hand during his dive and deflected off his glove into center field as Gosselin raced home.

Josh Donaldson and Jorge Polanco hit first-inning home runs and Randy Dobnak pitched five shutout innings for his sixth win of the season to lead Minnesota to its third consecutive victory, defeating Detroit in the first game of a doubleheader in Minneapolis.

Dobnak (6-2) limited the Tigers to just four singles and a walk over five innings while striking out four. The six wins moved him into a tie for the major league lead with Shane Bieber (Cleveland), Max Fried (Atlanta) and Yu Darvish (Chicago Cubs).

Tyler Duffey struck out two of the three batters he faced in the sixth and Taylor Rogers pitched around a lead single by Jeimer Candelario in the seventh to garner his eighth save in 10 tries. Matthew Boyd (1-5) allowed two runs on four hits over six innings while striking out eight.

Jorge Polanco went 4-for-4 with an RBI and a run scored and Marwin Gonzalez singled in the winning run in the eighth inning as Minnesota completed a doubleheader sweep of Detroit in Minneapolis.

Gonzalez drove in catcher Willians Astudillo, who began the inning at second base, with a one-out single to center off reliever Joe Jimenez (1-3) to break a 2-2 tie. The game was a makeup of an Aug. 28 postponement at Tiger Stadium, with Detroit serving as the home team and batting second.

Sergio Romo (1-1) pitched a hitless seventh to pick up the win. Trevor May struck out the side in the bottom of the eighth to garner his second save as Minnesota extended its win streak to four games.

AJ Pollock hit a go-ahead home run in the eighth, and Joc Pederson and Mookie Betts followed with insurance homers later in the frame as Los Angeles rallied twice in the late innings to beat visiting Colorado.

The Dodgers have won 17 of their last 18 against the Rockies at home and a dominating 24 of their past 28 overall against their National League West rival.

Will Smith and Max Muncy also hit home runs for the Dodgers, who have gone 9-0-1 in their last 10 series against the Rockies. Kevin Pillar hit a grand slam for the Rockies, who also got homers from Raimel Tapia and Sam Hilliard.

Shohei Ohtani’s one-out single in the bottom of the 11th inning scored Mike Trout from second base to lift Los Angeles to a victory over Houston in Anaheim, Calif.

The Astros trailed 5-2 going into the ninth, but rallied for three runs in the inning, ultimately tying the game on Kyle Tucker’s two-out RBI double that scored pinch runner Myles Straw.

Abreu extended his hitting streak to 18 games, tied for the longest in the majors this season with Baltimore’s Anthony Santander, while Eloy Jimenez had three hits and an RBI for Chicago.

Ronald Acuna Jr. returned from a hamstring injury to belt a pair of home runs and pace Atlanta to a win over Washington in the first game of a doubleheader.

It was the fifth straight win for Atlanta and the seventh consecutive loss for the Nationals.

Trea Turner hit a solo homer in the sixth inning to break a tie game and help send Washington to a win at Atlanta in the second game of a doubleheader, snapping its seven-game losing streak.

Turner’s blast came against reliever Will Smith (2-1). Turner has hit safely in 24 of his last 27 games.

Michael A. Taylor drove in three runs for the Nationals, and Trea Turner homered. The Braves got a grand slam from Freddie Freeman as well as homers from Austin Riley, Ronald Acuna Jr. and Travis d’Arnaud.

The National League Central-leading Cubs dropped the Cardinals into a second-place tie with the Milwaukee Brewers at 4 1/2 games back.

Darvish (7-1) held the Cardinals to just one hit — a Matt Carpenter homer — in his seven innings. He didn’t issue a walk. Reliever Jeremy Jeffress pitched a scoreless ninth inning for his fifth save. Darvish has allowed no more than one run in each of his past seven starts. He has held the Cardinals to two runs in 13 innings in two victories against them this season.

Zach Davies recorded his sixth win of the season with seven shutout innings, and San Diego hit three home runs in a victory at Oakland.

The game was the first for the A’s since being quarantined following a positive coronavirus test on pitcher Daniel Mengden last week. Oakland hadn’t played since dropping both ends of a doubleheader at Houston on Aug. 29.

Yoshi Tsutsugo was 2-for-2 with a solo homer, two runs and two walks, and Joey Wendle added two hits, a walk and a stolen base for the Rays, who have won 21 of their last 25 games overall.

Keston Hiura ripped a go-ahead RBI double to ignite a four-run seventh inning and belted a two-run homer in the eighth to lift visiting Milwaukee past Cleveland.

The late offense allowed Corbin Burnes (2-0) to pick up the win. The right-hander permitted one unearned run on three hits while striking out seven in six innings. Luis Urias and Ryan Braun each had an RBI single and Ben Gamel collected three hits to propel the Brewers to their fifth win in seven contests. The result gave Craig Counsell sole possession of third place on the franchise’s all-time managerial wins list with 423.

Tyler Naquin scored a run on a fielder’s choice and had one of the four hits for the Indians, who have lost three of their last five games overall and seven of their last nine at home.

Nick Castellanos hit a solo homer and visiting Cincinnati jumped out to an early lead as it topped Pittsburgh in the opening game of a doubleheader.

Jose Garcia and Jesse Winker each added an RBI single for the Reds. Luis Castillo (1-5), in his eighth start of the season, finally got his first win. He gave up two runs and seven hits in six innings, with eight strikeouts and two walks.

Gregory Polanco hit an RBI double and Colin Moran had an RBI single for Pittsburgh.

Anthony Alford hit a two-run triple and flashed some slick baserunning to score on a wild pitch Pittsburgh earned a split with Cincinnati, winning a game in which the Reds were the home team though the game was in Pittsburgh.

Pittsburgh came by the winning run in a relatively anticlimactic manner. At 3-3 heading into the fifth, Kevin Newman and Adam Frazier singled, and Newman scored when Bryan Reynolds bounced into a double play.

Cincinnati’s Trevor Bauer (3-3) lost his third straight start. He gave up four runs, just one earned, and six hits in six innings, with seven strikeouts and two walks. With the game tied at 2-2 in the fourth, Alford took a big lead and deftly scored on a Bauer wild pitch that wasn’t very wild — it got away from catcher Tucker Barnhart but barely made it onto the grass cutout.

Travis Shaw went 3-for-4 with a solo home run and Danny Jansen hit a two-run homer as visiting Toronto held on to defeat Boston in the first game of a doubleheader.

Randal Grichuk added two hits and two RBIs for the Blue Jays. A.J. Cole (2-0) allowed a walk in one inning to get the win. Anthony Bass earned his fifth save with a perfect seventh.

Yairo Munoz hit a two-run homer and was 3-for-3 with three RBIs for the Red Sox in the seven-inning game.

The Red Sox, as the visiting team in the nightcap, ended a five-game losing streak and stopped the Blue Jays’ winning streak at three games. Yairo Munoz had three hits in each game for Boston.

Rowdy Tellez hit a solo home run for the Blue Jays. Ross Stripling (3-2) made his first start for Toronto, and he allowed three runs and six hits in 4 1/3 innings.

Yusei Kikuchi pitched six strong innings as Seattle returned from a three-day break with a win over visiting Texas.

J.P. Crawford hit a three-run homer for the Mariners, who won their third in a row. Seattle had a three-game midweek series against the Oakland Athletics postponed because of a positive COVID-19 test in the A’s organization.

Kikuchi allowed one run on two hits with no walks and seven strikeouts to post his second consecutive victory. Texas right-hander Kyle Cody (0-1), who was making his first major league start, took the loss despite not allowing an earned run in three innings. Cody gave up one hit, walked two and struck out two.

Ketel Marte tied a career high with three extra-base hits as part of a 4-for-5 evening, and Arizona held on for a win over host San Francisco in the opener of a four-game series.

The Giants, who had won three of four, matched the Diamondbacks with 12 hits, including Brandon Belt’s solo home run in the seventh inning. 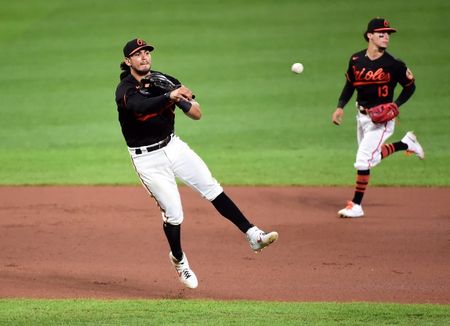 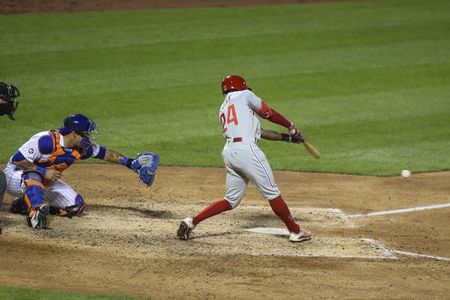 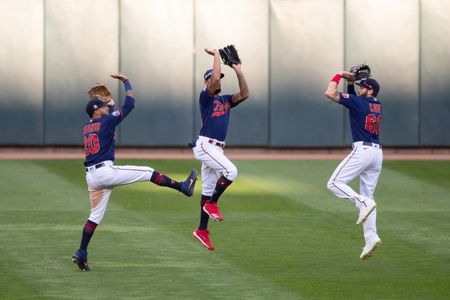 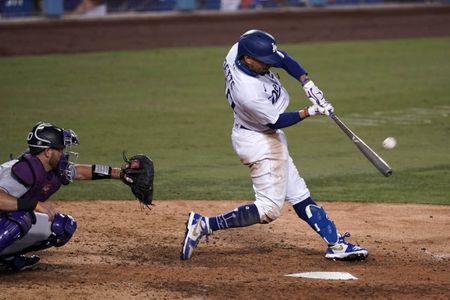 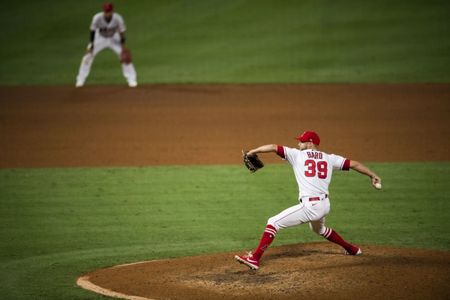 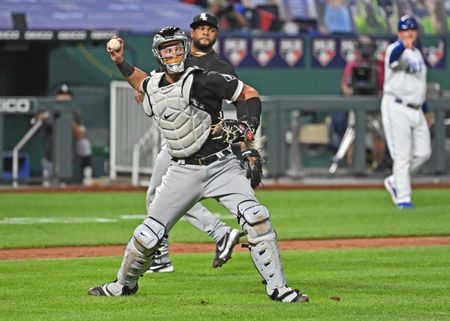 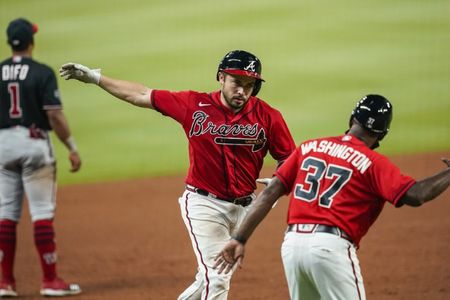 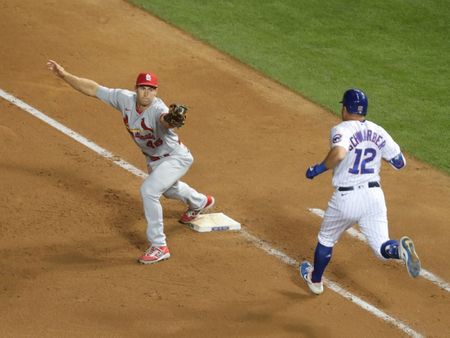 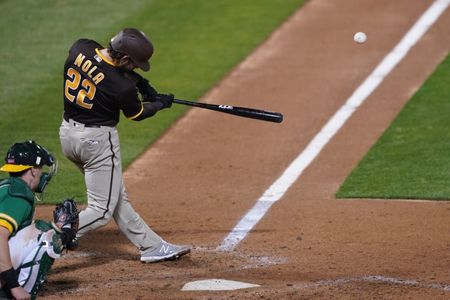 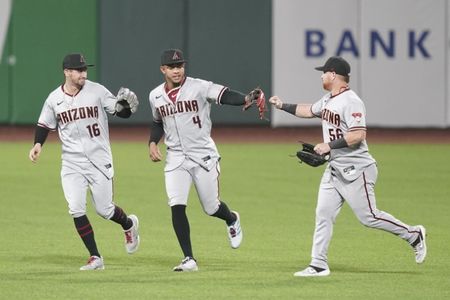 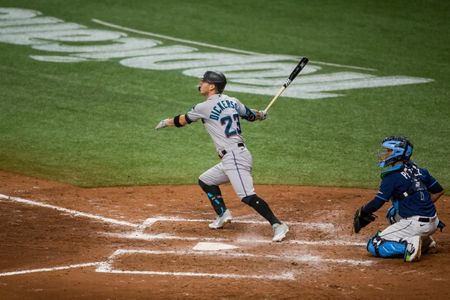 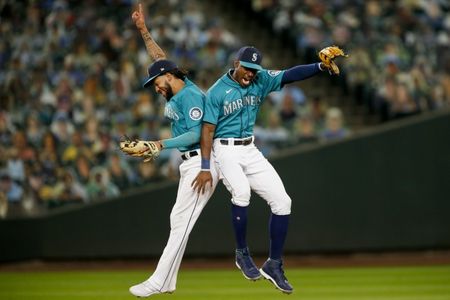 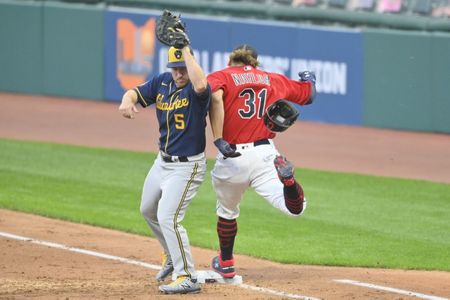 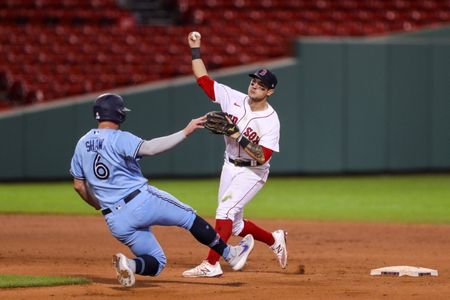 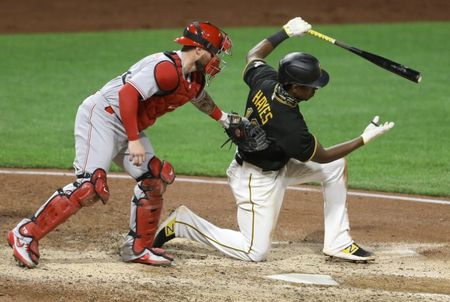