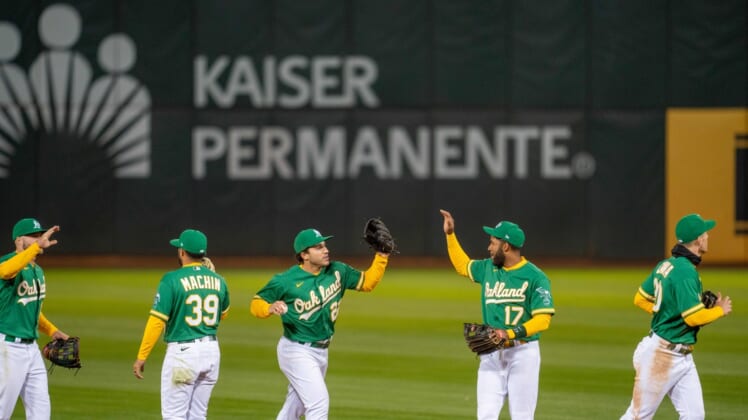 Manaea (2-1) coasted through seven shutout innings while allowing just six hits and one walk. He struck out seven.

Jesus Luzardo teamed with two relievers to throw a two-hitter as Oakland completed a sweep of visiting Minnesota with its second shutout of the day. The A’s claimed their 10th consecutive win.

The two shutouts gave the A’s four shutouts in their past five games. Luzardo (1-1) tossed 5 1/3 innings of two-hit ball, allowing one walk and striking out six. Lou Trivino struck out both batters he faced, and Jake Diekman fanned two in the ninth for his first save.

The game’s only run came in the fourth inning, when Matt Olson hit a leadoff double and scored on Seth Brown’s one-out single.

Julio Urias allowed one hit in seven scoreless innings with a career-high 11 strikeouts as Los Angeles earned a split of a two-game series between division leaders in Seattle.

Corey Seager drove in the game’s lone run with a third-inning single as the Dodgers snapped a two-game losing streak. The only hit Urias (3-0) allowed was an infield single by Mitch Haniger with two outs in the third inning.

Victor Gonzalez pitched the eighth inning for the Dodgers, and Kenley Jansen worked the ninth for his fourth save.

Burnes (2-1) gave up four hits and no walks, although he hit a batter. He struck out 10 Padres and now has 40 strikeouts on the season without issuing a walk. The four hits matched the total he had allowed in his first four starts.

Travis Shaw had a two-run double in the Padres’ five-run third inning, and Omar Narvaez capped the rally with a two-run single. Jace Peterson homered in the ninth.

The top three hitters in the Tampa Bay lineup combined for nine hits and five runs as the Rays roughed up host Kansas City for their fifth straight win.

With the Rays winning the first two games of this three-game series, the Royals will suffer their first series loss of the season. Tampa Bay will look to end its road trip a perfect 6-0 on Wednesday.

The Rays had a pair of four-run innings and a three-run rally. Austin Meadows, Randy Arozarena and Joey Wendle had three hits apiece, and Meadows, Brandon Lowe and Mike Zunino homered for Tampa Bay.

Bogaerts also had a double in the opener of a two-game set. Bobby Dalbec added an RBI triple to cap a four-run fourth inning and Christian Arroyo had three hits for Boston.

Rodriguez (3-0) allowed two runs, three hits and one walk in six-plus innings. He struck out six. Matt Barnes pitched the ninth inning to earn his third save of the season. Bo Bichette and Randal Grichuk each hit solo home runs and a single, accounting for all four of the Blue Jays’ hits.

Jose Abreu belted a pair of solo homers to highlight his three-hit, three-RBI performance and lift visiting Chicago past Cleveland.

Yasmani Grandal launched a two-run homer and Tim Anderson also went deep for the White Sox, who benefited from a four-run sixth inning to post their third win in their last four games.

Carlos Rodon (3-0) was making his first start since tossing a no-hitter in an 8-0 win over Cleveland last Wednesday. The reigning American League Player of the Week allowed two runs on three hits while striking out eight in five innings. Five walks drove up his pitch count.

Pinch hitter Aaron Hicks scored the tiebreaking run on a wild pitch with nobody out in the eighth inning and New York halted a five-game losing streak with a victory over visiting Atlanta.

The Yankees loaded the bases with nobody out in the eighth off Tyler Matzek (0-2) on a walk to Hicks ahead of singles to DJ LeMahieu and Aaron Judge.

Facing the Yankees for the first time since Game 3 of the American League Division Series, Braves starter Charlie Morton allowed one run on three hits in six innings.

Harvey (1-1) allowed eight hits and three runs in five innings, winning for the first time since July 13, 2019, when he was pitching for the Los Angeles Angels. He struck out four without issuing a walk. After a brilliant start to his career with the New York Mets, Harvey is now 20-35 since 2016.

Cesar Valdez got four outs — including three by strikeout — for his fourth save of the season. He fanned pitcher Pablo Lopez for the final out of the game as Miami was out of position players to use as a pinch hitter.

Buster Posey added a pair of solo home runs and a single and Tommy La Stella belted a two-run homer for the Giants, who have won three in a row. Brandon Crawford and Mike Yastrzemski contributed two hits apiece for San Francisco, which trailed 4-0 after three innings.

Brad Miller hit a three-run homer and Alec Bohm added a two-run shot for the Phillies. Rhys Hoskins hit a solo homer with two outs in the ninth.

Yan Gomes drew a bases-loaded walk in the eighth inning to bring home the go-ahead run as Washington rallied past visiting St. Louis.

Trailing 2-1, the Nationals scored two runs on one hit in the eighth. Andrew Stevenson led off with a walk against Giovanny Gallegos (2-1), who then hit Josh Harrison with a pitch. Trea Turner singled to right on an 0-2 pitch, scoring Stevenson to tie it and sending Harrison to third.

After Turner stole second, Josh Bell grounded out and Kyle Schwarber was intentionally walked. Gallegos struck out Starlin Castro, but then he walked Gomes on four pitches, forcing in the go-ahead run.

Jake Arrieta pitched five strong innings and Eric Sogard had two hits and an RBI in an emergency start to lift host Chicago past New York.

Cubs closer Craig Kimbrel walked two of the first three hitters to open the Mets ninth before allowing a single to load the bases, but he recovered to escape unscathed and notch his fourth save. Arrieta (3-1) spaced one run on three hits in five innings while walking three and striking out four.

Arizona pulled ahead of host Cincinnati in a game that was suspended in the top of the eighth inning due to inclement weather.

The teams will pick up where they left off prior to Wednesday’s regularly scheduled nine-inning game. Arizona will be at the plate in the top of the eighth with the bases loaded and one out.

The Diamondbacks tied the game at 4 in the eighth inning on Andrew Young’s 414-foot shot to center off Tejay Antone, and they moved ahead when Lucas Sims walked in a run with the rain pouring.

Jon Gray (2-1) allowed one run on three hits, struck out six and walked four in 6 2/3 innings to help the Rockies earn their second win in 10 games.

Michael Brantley collected three hits, Carlos Correa had an RBI double and also scored and Aledmys Diaz had a run-scoring double for Houston. The Astros have lost eight of their past nine.

Mike Trout, Albert Pujols and Kurt Suzuki homered to lift Los Angeles to a victory over Texas in Anaheim, Calif.

Nick Solak homered for the Rangers, who were limited to five hits.