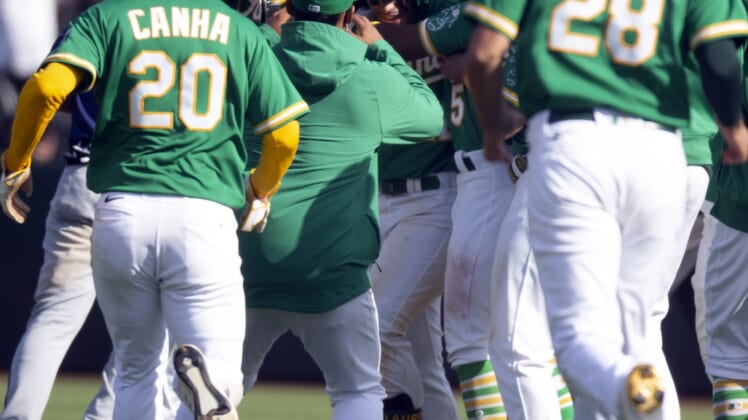 Third baseman Luis Arraez threw wildly to first on a potential game-ending ground out with two outs in the 10th inning Wednesday afternoon, allowing the tying and winning runs to score as the Oakland Athletics rallied for their 11th straight win, 13-12 over the visiting Minnesota Twins.

After Byron Buxton launched a two-run home run off Oakland closer Lou Trivino with one out in the top of the 10th, Twins closer Alex Colome (1-2) got two outs in the last of the inning before walking Seth Brown and Elvis Andrus to load the bases.

Twins second baseman Travis Blankenhorn had a chance to end the game on a grounder by Mark Canha but booted it, allowing Oakland to close within 12-11 and bringing Ramon Laureano to the plate. Laureano’s grounder resulted in Arraez’s game-ending miscue.

Deolis Guerra (1-0), who recorded the final out of the top of the 10th, was credited with the win as the A’s swept the three-game series. Nelson Cruz smacked two home runs and Josh Donaldson added one among his four hits for the Twins, who lost for the ninth time in 10 games.

David Bote had two hits and four RBIs and Matt Duffy had three hits and three RBIs for the Cubs, whose season-high offensive output started with a seven-run fourth inning. Alec Mills (1-0) pitched three innings of one-hit, shutout relief to earn the victory.

Francisco Lindor and Pete Alonso hit home runs for the Mets, who committed three errors in the Cubs’ big inning and have made six overall while losing the first two games of the series. New York’s David Peterson (1-2) allowed six runs (three earned) on four hits in 3 1/3 innings with two walks and three strikeouts.

The Padres also lost their starting pitcher, right-hander Dinelson Lamet, to forearm tightness after he pitched only two innings in his 2021 debut.

San Diego led 2-1 going into the sixth when the Brewers’ Travis Shaw drew a leadoff walk from Keone Kela, the fifth of eight Padres pitchers. Narvaez then pulled a homer into the seats in right. Peterson, who played 58 games for the Padres in 2014, connected with his second homer in as many games.

In his 10th career start and second against the Yankees, Anderson (1-0) allowed four hits and nearly equaled the longest outing of his brief career. The right-hander struck out four and worked around four walks in a 97-pitch outing.

New York’s Corey Kluber (0-2) allowed two runs and two hits in a season-high 4 2/3 innings. He struck out two and walked four — one shy of his career high.

Max Scherzer threw six strong innings while Alex Avila had two doubles and drove in the game’s only run as Washington defeated visiting St. Louis to take the rubber game of the three-game series.

Scherzer (1-1) gave up four hits and walked a batter while striking out nine. Scherzer retired 13 of the last 14 hitters he faced and has allowed one run in his past 22 innings. With 2,817 career strikeouts, Scherzer passed Mike Mussina for 21st place in major league history.

Cardinals starter Carlos Martinez (0-4), looking for his first win as a starter since July 2018, turned in his best start of the season. He allowed a run on four hits over six innings. St. Louis has lost each of its past four series.

Jesus Aguilar had a two-run double, a walk and a run to lead Miami’s offense. Marlins rookie second baseman Jazz Chisholm — in his first time leading off in the major leagues — went 2-for-4 with a stolen base. The Marlins, who snapped a two-game losing streak, are 7-3 in their past 10 games.

Bryce Harper scored from second base on Andrew Knapp’s walk-off single in the ninth inning as Philadelphia beat visiting San Francisco to salvage the finale of the three-game series.

Wandy Peralta (2-1) walked Harper to begin the ninth and allowed a one-out single to Brad Miller before Knapp singled home the winning run.

Harper tied the game with two outs in the seventh with a 395-foot solo homer off rookie Camilo Doval. Harper had two hits and is 11-for-17 with two homers over his past five games.

Salvador Perez had his third game-winning hit of the homestand as Kansas City avoided a three-game sweep in beating Tampa Bay with a two-out, walk-off single in the ninth.

Scott Barlow (1-0) earned the win despite blowing a lead in the eighth and allowing a go-ahead run in the top of the ninth. Diego Castillo (0-1) took the loss, which snapped Tampa Bay’s five-game win streak, after yielding two runs on two hits in the bottom of the ninth.

Jorge Soler led the Royals with three hits, including a solo homer, while Hunter Dozier and Santana hit two-run homers. Wendle, Meadows and Brett Phillips each had two hits for the Rays. Brandon Lowe hit a two-run homer, and Wendle knocked in three runs.

Tyler Anderson won his second straight start and Pittsburgh pushed across three fourth-inning runs to edge host Detroit in the first game of a split doubleheader, a makeup after Tuesday’s game was postponed.

Anderson (2-2) pitched five innings, allowing two runs on three hits while striking out seven. Bryan Reynolds, Colin Moran and Erik Gonzalez drove in the runs for Pittsburgh, which has won seven of its last 10 games. Adam Frazier and Phillip Evans each had two hits and a run.

Jonathan Schoop and Niko Goodrum hit solo homers and host Detroit snapped a five-game losing streak by defeating Pittsburgh in the second game of a doubleheader.

Spencer Turnbull (1-0), making his season debut, allowed just one run on two hits and two walks while striking out six in five innings. Gregory Soto recorded the last three outs of the seven-inning game, including two strikeouts, for his second save.

Phillip Evans homered and Erik Gonzalez drove in the other run for Pittsburgh. Miguel Yajure, called up from the taxi squad, took the loss in his first major league start. Yajure (0-1) allowed four runs on four hits in 4 1/3 innings.

Adolis Garcia and Nate Lowe hit back-to-back home runs in the eighth inning for Texas, turning a 3-1 deficit into a 5-3 lead and an eventual victory over Los Angeles in Anaheim, Calif.

Angels reliever Mike Mayers, who had allowed just one run in eight games this season, entered the game with one on and one out in the eighth. After Mayers walked Joey Gallo, Garcia launched a three-run home run on a 1-2 pitch. It was Garcia’s third home run of the season.

Lowe followed with a solo homer, his fifth of the season, and the Rangers added two more runs in the ninth.

Vladimir Guerrero Jr. hit an RBI single three batters into the game as visiting Toronto started fast and held on for a victory over Boston to split a two-game series.

Bo Bichette had an RBI single in a three-run second inning, and seven Blue Jays pitchers held back the Red Sox to end a three-game losing streak.

Xander Bogaerts homered, Rafael Devers doubled and drove in a run and Marwin Gonzalez had two doubles for the Red Sox. Boston lost for the third time in its past five games but still is tied with Oakland for the best record in the American League at 12-7.

In a game played in freezing temperatures and snow flurries, Colorado scored four runs in the first two innings and beat Houston in Denver.

Colorado swept the two-game series after winning 6-2 on Tuesday. The Astros have now dropped nine of their past 10 games following a 6-1 start to the season.

Wednesday’s game got off to a wild start as the teams combined for six runs in the first two innings before things settled down.

Kevin Ginkel and Stefan Crichton kept Cincinnati off the board after play resumed, and visiting Arizona made its go-ahead two runs in the eighth inning hold up for a victory in the resumption of Tuesday night’s suspended contest.

On Tuesday night, Cincinnati led 4-3 entering the eighth inning, but Andrew Young’s solo homer off Tejay Antone tied the game. With the rain and sleet picking up and field conditions worsening, the Diamondbacks eventually went ahead 5-4 on Carson Kelly’s bases-loaded walk from Lucas Sims.

Soon after, the umpires pulled the players off the field and the game was ultimately suspended. When play continued following a brief weather delay on Wednesday, the Diamondbacks still had the bases loaded but could not add on.

Josh VanMeter hit a tying three-run homer in the ninth inning against his former team, and visiting Arizona scored five times in the 10th to rally for a win over Cincinnati.

Trailing 3-0 in the ninth, Arizona took advantage of struggling Cincinnati reliever Amir Garrett (16.20 ERA), who walked two of the first three batters he faced. Then he served up the homer to VanMeter, a shot that landed in the concourse opening in the right-field seats.

Alex Blandino and Tyler Naquin (two hits) added RBI hits in the 10th for the Reds, who have dropped four straight to Arizona this season.