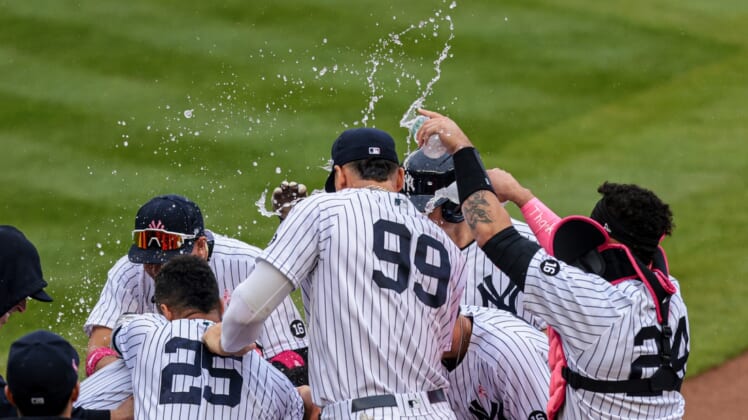 Giancarlo Stanton singled with one out in the ninth inning to give the New York Yankees a 3-2 victory over the Washington Nationals on Sunday at Yankee Stadium.

The Yankees started their rally against Brad Hand (2-1) when Tyler Wade and pinch hitter Aaron Judge drew walks. DJ LeMahieu beat out a double-play grounder to move Wade to third and Stanton won it by sharply hitting a single into left field between shortstop Trea Turner and third baseman Starlin Castro as the infield was in for Washington.

It was Stanton’s seventh career game-ending hit and second since joining the Yankees following the 2017 season in a trade with the Miami Marlins.

The Yankees posted their second straight win in their last at-bat, improved to 12-5 since opening the season with 11 losses in 17 games and also capped a 7-2 homestand.

Red Sox starter Nick Pivetta (5-0) gave up two runs on three hits over six innings as Boston won the first three games of the four-game series and four in a row overall.

Jacob deGrom exited after five innings due to tightness in his right side, but a trio of pitchers helped host New York record a win over Arizona.

The Mets have won five straight after completing a sweep of the Diamondbacks, who were outscored 33-12 on their 0-6 road trip.

deGrom, who was scratched from his scheduled start Tuesday due to a sore right lat, set down the first 12 batters he faced on just 39 pitches. The two-time National League Cy Young Award recipient labored in the fifth, when he appeared to grimace a handful of times while allowing one run — on a double-play grounder by Nick Ahmed — on one hit and three walks.

Kyle Tucker homered for the first time since April 24 and host Houston claimed the rubber match of its three-game series with Toronto.

Tucker entered the series finale with just one hit over his last 15 plate appearances. He worked a leadoff walk and scored the Astros’ first run in the second inning before adding an RBI triple in the third and a three-run homer that completed a four-run rally in the fourth.

The Astros grabbed a 7-0 lead after Tucker crushed a 3-0 fastball from Toronto left-hander Anthony Kay 388 feet into the upper deck in right. Tucker finished 2-for-3 with three runs scored and a season-high four RBIs.

Yermin Mercedes had a double, triple and three RBIs as Chicago defeated the Royals for a three-game sweep and its 10th consecutive victory at Kansas City.

The Royals lost their eighth consecutive game and completed a seven-game homestand without a victory.

White Sox starter Lucas Giolito (2-3) gave up one run on four hits over five innings with two walks and two strikeouts to pick up the win. The Royals hit Giolito hard, with an exit velocity of 100-mph or better off the righty eight times but getting just one hit in those instances.

Tyrone Taylor hit a two-out, RBI single in the top of the 10th inning, leading Milwaukee to a win over host Miami.

Marlins center fielder Lewis Brinson, who returned after missing two games due to a finger injury, went 3-for-4 with a solo home run. Daniel Vogelbach hit a solo homer for Milwaukee.

Cubs center fielder Jake Marisnick left the game with two outs in the top of the first inning, as he suffered a right hamstring strain in pursuit of a Difo fly ball. The ball fell into left center for a two-run single that put the Pirates ahead 3-0, on their way to a four-run first.

Anderson (3-3) spaced two runs on four hits in eight innings with one walk and six strikeouts. Anderson retired the final 13 batters he faced.

Jared Walsh hit a two-run double and the Angels held on to beat the Dodgers in the rubber game of a three-game series in Anaheim, Calif.

Angels starter Jose Quintana walked five and struck out six over four-plus innings, allowing two hits and one run as six pitchers shut down the Dodgers on four hits. Right-hander Aaron Sledgers (2-0) got the win by pitching 1 1/3 innings of scoreless relief.

Ryan Helsley got the final two outs to record his first save of the season and second of his career. Nolan Arenado hit a solo home run and Yadier Molina had two doubles and an RBI for the Cardinals, who won for the ninth time in 11 games.

Losing pitcher German Marquez (1-4) allowed two runs (one earned) on six hits and three walks (two intentional) in six innings. The Rockies have lost 14 of 16 road games this season and 25 of their past 29 games at Busch Stadium.

Cronenworth followed a lead-off single by Wil Myers by pulling a Cueto slider 445 feet into McCovey Cove for a quick 2-0 lead. Cronenworth, who had kept the Giants off the board with a pair of defensive plays in the bottom of the first, became only the fourth Padre ever to reach McCovey Cove and the first since 2014.

Tatis then followed a double by Victor Caratini with a 454-foot blast to left center. It was the fourth-longest home run of Tatis’ career. The Padres, who had been in an offensive slump, finished with season highs of 16 hits and seven extra-base hits.

Adolis Garcia homered and drove in five runs as Texas beat Seattle to take two of the three-game series in Arlington, Texas. Charlie Culberson also homered for the Rangers, sparking a six-run fifth inning in which Garcia hit a three-run shot.

Trailing 2-1, Culberson homered deep to left-center field on the first pitch in the bottom of the inning. Jose Trevino then reached on a throwing error by Mariners shortstop J.P. Crawford, Isiah Kiner-Falefa lined a single to right, and Nick Solak followed with a two-run double to left to break the tie. Nate Lowe grounded a single to left before Garcia hit his ninth home run of the season for a 7-2 advantage.

Ynoa (4-1) allowed only one run on four hits — one of them a home run to Andrew McCutchen on the first pitch of the game — with one walk and six strikeouts. After McCutchen’s fifth homer of the year, the Phillies offense got quiet against Ynoa and three relief pitchers, who limited them to six hits.

The Braves scored four times in the first inning against Nola. Freddie Freeman singled in Ronald Acuna Jr., who was back in the lineup after being hit in the hand on Saturday night. Ozzie Albies chased him home with a triple and scored when Dansby Swanson followed with a two-run homer, his fourth.

Willy Adames belted a three-run homer and Mike Brosseau delivered a go-ahead solo blast in the sixth inning as visiting Tampa Bay salvaged the finale of its three-game series with a win against Oakland.

After dropping the first two games of the series by a total of four runs, Tampa Bay rallied from an early 3-0 deficit to win for the sixth time in its past eight games.

Jeffrey Springs (3-1) pitched an inning in relief for the victory while Andrew Kittredge recorded the final five outs for his second save. 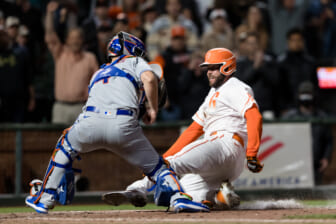