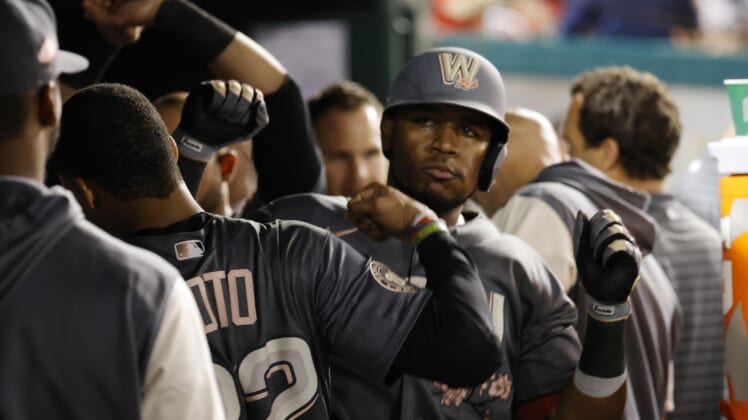 Yadiel Hernandez drove in four runs and drilled one of two Washington home runs as the Nationals ended the visiting Houston Astros’ 11-game winning streak by winning 13-6 on Saturday night.

Maikel Franco homered and knocked in three runs and Nelson Cruz provided three RBIs and three hits as the Nationals won for just the second time in their last six games.

Josh Rogers (2-2), with one shutout inning of relief, was the winning pitcher after starter Erick Fedde worked four innings and gave up three runs on five hits.

The Nationals scored in five of the first six innings, building a 13-4 lead by reaching a double-figure run total for the fifth time this season. They had four consecutive frames of multiple runs. That was more runs allowed by Houston than the total (12 runs) given up during its 11-game winning streak.

Bryce Harper hit his third home run in three games and had three hits as Philadelphia continued to pour on the offense in beating host Los Angeles.

Jean Segura, Kyle Schwarber and Rhys Hoskins also hit home runs for the Phillies, who have scored 29 runs in the first three games of the four-game series, all victories.

Luis Robert had two hits and two RBIs, including the walk-off single in the bottom of the ninth, to lift host Chicago to a victory over New York.

Yoan Moncada homered for the second time in three games for the White Sox.

Outscored 25-11 in the first two games of the series, the White Sox prevailed in a nail-biter as Dallas Keuchel outdueled Yankees counterpart Jordan Montgomery before the game came down to the bullpens.

Hudson (3-2) allowed five hits and two walks as the Cardinals won for just the second time in seven games. Four relievers combined to surrender just three hits the rest of the way.

Yan Gomes drove in the go-ahead run in the top of the ninth and also homered as Chicago rallied to beat Arizona in Phoenix.

It was just the third win in the last 10 games for Chicago, which had managed just three base runners before scoring three times in the ninth against Diamondbacks closer Mark Melancon (0-5).

Melancon, who saved Arizona’s 4-3 series opening win on Friday, faced four batters to start the ninth and didn’t record an out.

Slumping Marcell Ozuna belted a two-run homer and Austin Riley added a go-ahead RBI double in the eighth inning to lift host Atlanta to a win over San Diego.

The Padres stunned the Braves by scoring four runs to take a 5-2 lead in the top of the eighth. Atlanta, however, responded with its own four-run rally to regain the lead.

The Braves tied it against Steven Wilson (3-1) on an RBI single by Ozzie Albies and a two-run shot by Ozuna, who was in a 3-for-45 slump. It was Ozuna’s fifth homer and first since April 17 against the Padres. Atlanta took the lead when Travis d’Arnaud scored on Riley’s double.

Luis Barrera’s two-out, three-run home run in the bottom of the ninth inning lifted Oakland to a victory over visiting Los Angeles in the first game of a doubleheader.

The Athletics trailed 3-1 heading into the bottom of the ninth and the Angels had closer Raisel Iglesias on the mound. Iglesias, who entered the game a perfect 8 for 8 in save opportunities, retired the first two batters and got ahead 0-2 to Ramon Laureano. Laureano worked the count to 2-2 before doubling to right-center.

Iglesias (1-1) then walked Christian Bethancourt, bringing to the plate Barrera, who had one hit all season. But Barrera hit a slider over the fence in right field for his first career major league homer.

Taylor Ward belted a grand slam as Los Angeles bounced back from a walk-off defeat earlier in the day to thump host Oakland in the nightcap of a doubleheader.

Shohei Ohtani added a two-run home run for the Angels.

Angels starter Michael Lorenzen (4-2) went seven innings, charged with one run on five hits. He walked one and struck out three.

Brendan Rodgers and Yonathan Daza also had two hits each and German Marquez picked up his first win for Colorado, which ended a five-game losing streak.

Marquez (1-3) allowed three runs on three hits and struck out six in six innings. He walked one. Salvador Perez and Bobby Witt Jr. homered for the Royals.

Adam Ottavino (1-1) was credited with the win after he allowed a single to Luis Torrens but stranded him at third in the eighth. Edwin Diaz, who collected 109 saves for the Mariners from 2016-18, dispatched his former team by striking out the side to earn his eighth save.

Starling Marte finished a homer shy of the cycle and scored three runs for the Mets.

Willi Castro had a home run and two RBIs to lead host Detroit to a win over Baltimore.

The Tigers have won consecutive games for the first time since April 21-23. Detroit also clinched only its second series win of the season. Detroit’s bullpen tossed 7 2/3 innings of scoreless relief after starter Michael Pineda had to leave the game with a right hand contusion. Pineda was hit by a line drive off the bat of Baltimore’s Ramon Urias.

Bruce Zimmerman (2-2) took the loss for the Orioles. He allowed three runs (two earned) and seven hits, walking one and striking out two in six-plus innings of work. Baltimore only collected four hits in the game.

Diego Castillo added an RBI single for the Pirates, who had dropped the first two games of the four-game series.

Thompson (2-3), who pitched five shutout innings against the Reds in his previous start, carried a no-hitter into the sixth, when Brandon Drury lined a single to right with two outs for the only hit he allowed. Thompson struck out three and walked three. David Bednar picked up a four-out save, his sixth in six opportunities.

Miami slugged three homers in the fourth inning and went on to rout visiting Milwaukee.

Aguilar, Anderson and Miguel Rojas led Miami with two RBIs each as the Marlins won for just the third time in 13 games. Eight of those 10 losses were by one run. Left-hander Trevor Rogers (2-4) earned the win, allowing five hits, no walks and one run in 5 1/3 innings.

Martinez extended his hitting streak to 15 games as the Red Sox won for the third time in their past four contests.

The victory stopped Toronto’s losing streak at five games. Prior to the solo shot by Hernandez, the game had been tied 1-1 since the first inning. Jansen added a two-run home run after the blast by Hernandez, and Lourdes Gurriel Jr. had an RBI single in the uprising.

Tampa Bay’s Manuel Margot extended his hitting streak to a career-high 11 games with a single in the fourth inning. Margot also singled in the sixth inning.

Andres Gimenez and Myles Straw each drove in runs in the top of the 10th inning as Cleveland beat host Minnesota.

Cleveland broke a 1-1 tie when Gimenez’s leadoff double off the right-field wall scored Ernie Clement, who was pinch-running for automatic runner Franmil Reyes, from second base. The Guardians added an insurance run on Straw’s two-out, RBI single off Jharel Cotton (0-1).

Guardians reliever Nick Sandlin (3-1) pitched 1 1/3 scoreless innings for the win. Emmanuel Clase allowed a run in the bottom of the 10th before securing his seventh save.