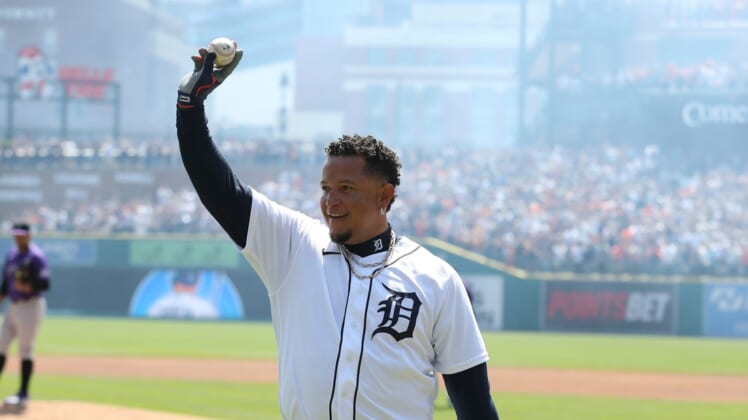 Miguel Cabrera became the 33rd major-leaguer to reach 3,000 career hits and the Detroit Tigers routed the visiting Colorado Rockies 13-0 in the first game of a split doubleheader Saturday.

Cabrera, 39, grounded a first-inning single to right field off right-hander Antonio Senzatela to join an exclusive club. The two-time AL MVP is the seventh player in major league history with 3,000 hits and 500 home runs. He also became the first Venezuelan player to reach 3,000 hits.

Harold Castro went 4-for-5 with two runs scored for Detroit, which out-hit the Rockies 20-7 and set season highs in runs and hits. Randal Grichuk had two hits for Colorado, which was playing just its third road game of the season.

Gomber (1-1) kept Detroit from mounting any kind of rally. He allowed four hits, retired 15 of the last 17 batters he faced and struck out eight over his six innings. Alex Colome got the final three outs for his second save for Colorado.

Austin Meadows had a two-run triple and Beau Brieske (0-1) allowed three runs on three hits in five innings for the Tigers in his major league debut.

Kevin Kiermaier hit a two-run home run in the bottom of the 10th inning as Tampa Bay came from behind to defeat Boston in St. Petersburg, Fla.

The game had been scoreless through nine innings before Boston’s Bobby Dalbec tripled to score Jackie Bradley in the 10th inning.

Up to that point, six Tampa Bay pitchers had held Boston hitless. In the first nine innings, the Rays had been held to just two hits as the Red Sox had a strong pitching performance of their own.

Alfonso Rivas hit a three-run homer during an eight-run second inning and finished with five RBIs, while Nico Hoerner posted a career-high four hits as Chicago snapped a four-game losing streak with the rout of visiting Pittsburgh.

Starter Kyle Hendricks yielded two of Pittsburgh’s three hits over seven innings. Chicago posted its highest-scoring contest since a 26-7 win at Colorado on Aug. 18, 1995. The Cubs had 23 hits in the largest shutout victory since at least 1901.

According to STATS, this is the most runs Pittsburgh has allowed since a 21-4 loss to the New York Giants on May 25, 1954.

The two homers marked Trout’s 21st career multi-homer game, setting a club record. Brandon Marsh’s two-run homer in the sixth gave the Angels a 4-2 lead before the Orioles went ahead with a three-run seventh inning. Two of those runs were driven in by Ryan Mountcastle, who had three RBIs for the game.

Orioles closer Jorge Lopez gave up a single to Trout in the ninth but nothing else and closed it out for his fourth save. Orioles reliever Bryan Baker (1-0) earned the win over Angels reliever Aaron Loup (0-1).

C.J. Abrams scored from third on Austin Nola’s walk-off sacrifice fly to left in the bottom of the 10th as host San Diego ended a 10-game losing streak to Los Angeles.

Jurickson Profar saved the Padres in the top of the 10th, throwing out ghost runner Chris Taylor at third trying to advance on a flyout by Gavin Lux. Padres reliever and winner Robert Suarez (1-1) then struck out Mookie Betts to end the inning. Betts whiffed four times, including leaving the bases loaded in the second.

Wood (2-0) allowed two runs on four hits, walked one and struck out five. His career ERA at Nationals Park actually rose to 2.86, good for second behind Jacob deGrom (2.80) among active pitchers with 40 or more innings at the stadium.

Former Giant Aaron Sanchez (0-1) was called up from Triple-A Rochester to make the start for Washington. He gave up four runs on six hits over 4 1/3 innings.

Before the ninth-inning comeback, Cleveland’s Austin Hedges hit a go-ahead, two-run homer with two outs in the eighth inning off Chad Green, but Miguel Castro (1-0) tossed a scoreless ninth. Clase (0-2) took the loss. Josh Naylor also hit a two-run homer for the Guardians.

Byron Buxton went 4-for-4 with a home run and a double and Luis Arraez had four hits and three RBIs to lead Minnesota to its third straight victory over visiting Chicago.

Dylan Bundy improved to 3-0 by scattering four hits over five shutout innings. He didn’t walk a batter and struck out four while lowering his ERA to 0.59. Jose Abreu homered and had two RBIs for Chicago, which lost its sixth straight game.

Brad Miller ended a scoreless deadlock with a two-out, two-run single in the eighth inning as Texas beat host Oakland in a pitchers’ duel that featured just eight hits.

After rival Martin Perez left following six shutout innings during which he allowed just two hits, A’s right-hander Frankie Montas (2-2) took a one-hit shutout into the eighth and got Kole Calhoun to ground out for the first out.

However, Adolis Garcia and Willie Calhoun followed with singles, prompting A’s manager Mark Kotsay to pull Montas in favor of Domingo Acevedo with runners at the corners. The reliever got Jonah Heim to ground out to first, advancing pinch-runner Eli White to second, and Miller followed with a liner the opposite way to left field for the game-winning blow.

The Cardinals are headed in the opposite direction. They have won six of their past eight games by a combined score of 33-16.

Willy Adames added two hits for the Brewers, who scored four runs in the fifth inning and one in the sixth to erase a 3-0 deficit. Milwaukee starter Adrian Houser (1-2) tossed six innings and gave up five hits and three runs to go along with three strikeouts and one walk.

Santiago Espinal homered for the second time in as many games and Toronto secured a series win over host Houston with a comeback victory.

Espinal snapped a 2-2 tie with his one-out shot to left field off Astros reliever Blake Taylor (0-1) in the seventh inning. Toronto trailed 2-1 after the first but rallied to remain unbeaten over the last 11 starts from right-hander Alek Manoah (3-0).

Blue Jays designated hitter George Springer, a three-time All-Star and 2017 World Series Most Valuable Player over seven years with the Astros, missed the series opener after being hit by a pitch on the wrist Wednesday against the Boston Red Sox. Springer made an immediate impact against his former team with his return to the lineup, slugging his 45th career leadoff home run.

Jazz Chisholm Jr. homered and drove in three runs and visiting Miami broke out of its offensive slump to beat Atlanta.

Chisholm was 4-for-6 with three runs scored and two stolen bases, and he hit the game’s first pitch for a home run. It was his sixth multiple-RBI game of the season.

Chisholm sparked a 14-hit attack, which included two hits each from Jesus Aguilar, Jesus Sanchez, Avisail Garcia and Joey Wendle. It was the second-highest run total the Marlins have produced this season. The Marlins, who had totaled just six runs in their previous four games, scored three times in the sixth and three times in the seventh to take the lead for good.

Humberto Castellanos allowed two runs over five solid innings and earned his first win of the season as Arizona beat visiting New York in the middle game of a three-game series.

The Diamondbacks have won three of four. The Mets, who have yet to lose a series this season, lost for just the second time in seven games.

Castellanos (1-0) gave up four hits and one walk while striking out five. He retired nine in a row after walking leadoff batter Brandon Nimmo and didn’t allow anyone beyond first base until the fifth.

Ty France had his first career five-hit game, including a home run, to lead host Seattle to a victory over Kansas City.

The Mariners have won the first two games of the series.