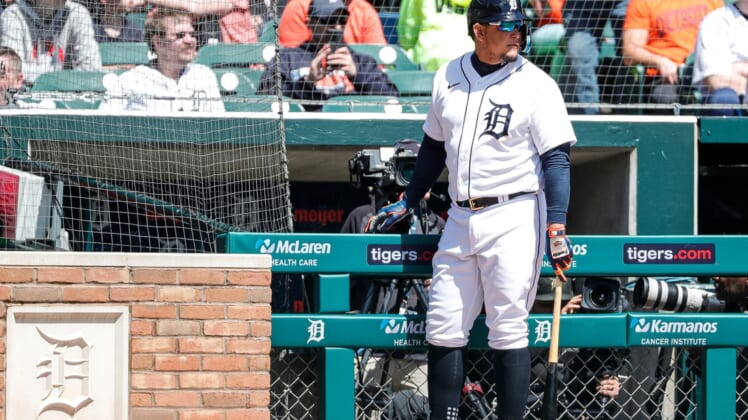 Miguel Cabrera remained one hit shy of 3,000 for his career while Michael Pineda won his Detroit debut as the Tigers downed the visiting New York Yankees 3-0 on Thursday afternoon.

Cabrera was 0-for-3 before he was intentionally walked with runners at second and third and two outs in the eighth inning. The strategy backfired when Austin Meadows followed with a two-run bloop double.

Pineda gave up three hits in five scoreless innings and Gregory Soto notched a five-out save in Detroit’s first shutout this season. Robbie Grossman had three hits, scored a run and drove in another.

Yankees starter Jordan Montgomery (0-1) gave up one run on three hits in six innings with two walks and five strikeouts.

Carrasco (1-0) pitched into the eighth for the first time since 2019 and allowed two runs on four hits, struck out seven and issued no walks. Francisco Lindor, who joined the Mets from the Cleveland Guardians in the same trade as Carrasco, homered and collected three hits.

Eduardo Escobar also homered as the Mets took three of four from the defending NL West champions. Mike Yastrzemski homered and Thairo Estrada hit an RBI single for the Giants.

Five Pittsburgh relievers held the Cubs to one hit over six scoreless innings in Chicago.

Pirates cleanup hitter Yoshi Tsutsugo delivered a go-ahead, two-run double in the fifth inning. Daniel Vogelbach clubbed a two-run homer and Ben Gamel had three hits for the Pirates, who improved to 2-5 on the road.

Pablo Lopez, who got married on Monday, celebrated by striking out nine batters in seven scoreless innings as host Miami defeated St. Louis.

The Marlins snapped their eight-game losing streak against the Cardinals, a skid that started last year. Miami had scored just seven runs in those eight defeats.

Jesus Sanchez and Jazz Chisholm Jr. slugged homers for Miami, which snapped a two-game losing streak and ended its homestand with a 4-3 record.

Franmil Reyes hit a two-run homer and Zach Plesac pitched into the seventh inning as Cleveland completed a three-game sweep of visiting Chicago.

Josh Naylor had two hits and two RBIs for the Guardians. Plesac (1-1) ended a six-start winless streak, allowing two runs (one earned) on seven hits over 6 2/3 innings. Emmanuel Clase retired Chicago in order in the ninth for his second save.

Luis Robert and Gavin Sheets had two hits apiece for the White Sox, who have lost four in a row after winning six of their first eight games.

Kevin Gausman pitched into the ninth inning and Matt Chapman went 3-for-4 with a double and an RBI as Toronto held on to beat host Boston.

Gausman (1-1) was relieved by Jordan Romano after allowing a first-pitch single to Trevor Story in the ninth. Romano stranded the tying run on third base to record his seventh save. Raimel Tapia and Bo Bichette each had two hits for the Blue Jays.

Xander Bogaerts capped a 3-for-4 day with an RBI double for the Red Sox in the ninth. Bobby Dalbec added two hits.

Ryan allowed no runs on two hits, walked one and struck out five. He allowed only one runner to advance past first base. Emilio Pagan earned his first save of the season.

Gio Urshela walked to lead off the second inning and went to third on a single by Max Kepler before Miguel Sano drove him in on a sacrifice fly, marking the game’s only run.

Sean Murphy drove in three runs with a home run, a double and a single and Cristian Pache hit his second homer as Oakland beat visiting Baltimore.

Sheldon Neuse was 3-for-4 with two RBIs for the A’s, who also got a pair of hits from Tony Kemp. Paul Blackburn (2-0) earned the win, allowing one run and three hits in five innings. Dany Jimenez tossed a 1-2-3 ninth with two strikeouts for his second save.

Austin Hays had a double and a single and drove in a pair of runs for the Orioles.

Cooper Hummel had two hits, including a two-run homer run, and Matt Davidson and Jake McCarthy also homered for the Diamondbacks, who have won two straight for the first time this season.

Davies (1-1) gave up two runs on two hits in five innings. He struck out seven and walked two. Nelson Cruz homered for the Nationals. Washington starter Josh Rogers (1-2) was lifted after allowing four runs on six hits in 4 1/3 innings.