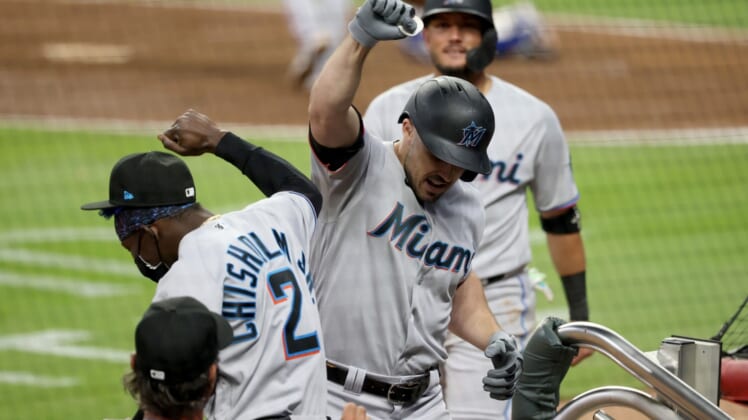 Miami left fielder Adam Duvall had two home runs and matched a club record with seven RBIs to help lead the visiting Miami Marlins to a 14-8 win over the Atlanta Braves on Tuesday.

Miami came up with season highs with the 14 runs and hits (17), and seven of its starting position players got at least one hit. Third baseman Brian Anderson was 3-for-5, including his first homer and three RBIs, and Miguel Rojas was 3-for-6 with an RBI and two runs scored.

The winning pitcher was John Curtiss (1-0), who pitched 1 2/3 scoreless innings in relief of Pablo Lopez. Curtiss allowed one hit and struck out two. Lopez pitched four innings and gave up six runs on nine hits and one walk. He struck out six.

Max Muncy and Chris Taylor homered and had two hits apiece, and Mookie Betts also went deep for the Dodgers. Bauer (2-0) had an impressive home debut for Los Angeles, allowing just one hit and struck out nine.

Garrett Hampson had the only two hits for Colorado, a single in the third and another leading off the ninth.

Wilmer Flores broke a seventh-inning tie with a sacrifice fly and Jake McGee extended his season-opening hitless streak as they combined to deliver San Francisco a victory over visiting Cincinnati.

Joey Votto and Mike Moustakas went deep for the Reds, who have lost three of four since a 6-1 start.

Rafael Devers and Hunter Renfroe each homered and Bobby Dalbec had a pair of RBI doubles as American League East-leading Boston extended its win streak to seven games with a victory over Minnesota in Minneapolis.

Christian Arroyo also had two hits and scored two runs for the Red Sox, who bounced back from an early 2-0 deficit. Adam Ottavino (1-0) picked up the win in relief while Matt Barnes pitched a 1-2-3 ninth to pick up his first save.

Byron Buxton went 2-for-5 with a double and a run scored for Minnesota, which finished with just five hits while suffering its third straight loss. Randy Dobnak (0-2) picked up the loss, allowing one run on two hits over three innings of relief.

Jonathan Villar hit a walk-off single with one out in the bottom of the eighth inning to lift host New York past Philadelphia.

Pete Alonso singled home Francisco Lindor earlier in the eighth as the Mets rallied for the win. Dominic Smith also homered and drove in two runs for the home team.

Didi Gregorius finished with two hits for the Phillies and has hit safely in all 10 games this season.

Brandon Nimmo had three hits and three RBIs to lift host New York to a doubleheader sweep over Philadelphia in the nightcap.

The Mets swept the Phillies for the first time in a doubleheader since September 2011. Mets starter Marcus Stroman (2-0) was dominant in six innings as he gave up four hits and no runs.

Seth Brown delivered a tie-breaking, leadoff homer in the eighth inning and visiting Oakland rallied from a five-run deficit to beat Arizona in Phoenix.

Oakland pulled even in the seventh on Jed Lowrie’s two-out, three-run homer off Kevin Ginkel before Brown capped the comeback with a 422-foot blast to right field off Anthony Swarzak (0-1).

Matt Chapman tripled in an insurance run in the ninth for Oakland, which swept the brief two-game set and has won four in a row since beginning the season with a 1-7 record.

Kyle Seager doubled high off the wall in center field to bring home the go-ahead run as Seattle defeated host Baltimore in eight innings in the opener of a doubleheader.

Ty France and Tom Murphy hit solo homers for Seattle, which won its third consecutive game. Mariners right-hander Rafael Montero (1-0) got the victory despite blowing a save and Kendall Graveman pitched the eighth for the save.

Ramon Urias hit a two-run homer for the Orioles, who have lost four in a row.

Ramon Urias’ two-out single in the bottom of the seventh inning brought home the winning run as Baltimore defeated visiting Seattle in the nightcap of a doubleheader.

Orioles right-hander Cesar Valdez (2-0) got the victory, while Maikel Franco drove in three runs on a bases-clearing double.

Sam Haggerty hit a two-run homer onto Eutaw Street for the Mariners in the top of the seventh to tie it, but they saw their three-game winning streak come to an end.

Charlie Culberson notched three hits and three RBIs, including a two-run homer, to boost Texas to a win over Tampa Bay in St. Petersburg, Fla.

Isiah Kiner-Falefa, Jose Trevino, Joey Gallo and Solak each had two hits for the Rangers, who broke their four-game losing streak and have split the first two games of the four-game series.

Randy Arozarena was 2-for-3 and scored twice, and Brandon Lowe and Yandy Diaz each had two hits for the Rays, who are 3-2 on their seven-game homestand.

The win was the second in seven games for the Blue Jays, who have split the first two games of the three-game series with the Yankees.

The Blue Jays supported Ryu (1-1) by scoring in every inning between the second and fifth. The 34-year-old left-hander allowed just one unearned run on four hits and one walk while striking out seven over 6 2/3 innings.

Visiting Chicago got a two-run homer from Willson Contreras to snap a three-game losing streak in a victory over Milwaukee.

The Cubs’ scheduled starter, Kyle Hendricks, was scratched because he wasn’t feeling well, according to the team’s social media account about 30 minutes before the game. Alec Mills, who threw a no-hitter in his previous start in Milwaukee last Sept. 12, was a last-minute replacement and went four innings, allowing two runs and two hits.

Luis Urias homered for the Brewers, while starter Brandon Woodruff was hit with a no-decision after pitching six innings of one-run ball with six strikeouts.

Roberto Perez and Amed Rosario both notched RBIs for the Indians in a clutch, 10th inning rally.

Matthew Boyd, backed by five home runs, pitched effectively into the seventh inning as visiting Detroit claimed a series win with a victory over Houston.

Catcher Salvador Perez picked off the potential tying run at third base with two outs in the top of the ninth as Kansas City defeated visiting Los Angeles.

Royals closer Greg Holland’s 0-2 pitch bounced in the dirt but caromed off Jared Walsh at the plate before Perez picked it up and threw out David Fletcher before he could scramble back to the bag. Danny Duffy (2-0) pitched six innings of one-run ball, striking out six in the win.

Erik Gonzalez added an RBI double and RBI single, and Colin Moran, Bryan Reynolds and Kevin Newman an RBI single each for the Pirates.