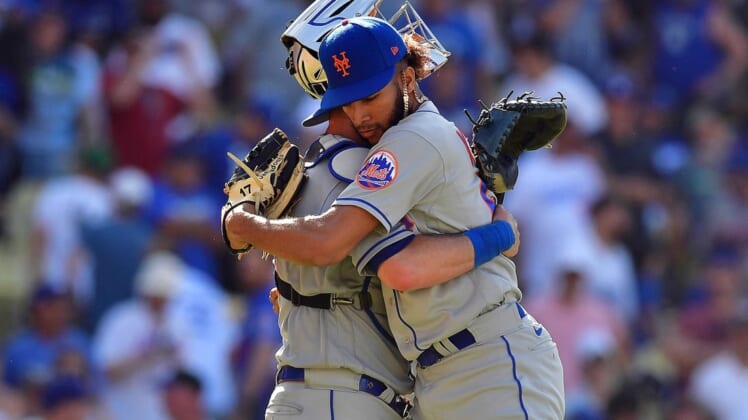 The visiting New York Mets rallied with three runs in the eighth inning and one more in the 10th to earn a 5-4 victory over the Los Angeles Dodgers on Sunday in a matchup between the top two teams in the National League.

J.D. Davis hit the go-ahead RBI double in the 10th inning for the Mets, while right-hander Adonis Medina struck out Will Smith to end the game with the tying run on third base and the go-ahead run on second for his first save. The Mets won the final two games of the series as the teams split the four-game set.

Trea Turner and Smith hit home runs for the Dodgers, but right-handed reliever Brusdar Graterol was charged with three runs as the Mets took a 4-2 lead in the eighth inning.

The Dodgers pulled to within a run in the ninth inning when Smith’s sixth home run of the year made it 4-3. With Los Angeles down to its last strike against Seth Lugo, Chris Taylor doubled and Eddy Alvarez hit an RBI single to tie the score in just his second career game for the Dodgers.

Josh Donaldson hit a game-winning sacrifice fly in the 10th inning and host New York beat Detroit to sweep the three-game series and extend its winning streak to six games.

Donaldson gave the Yankees their latest win when his fly ball off Gregory Soto (2-3) in front of the warning track in left field scored designated runner Aaron Judge. Joey Gallo hit a two-run homer in the fifth but also heard boos when he struck out with the bases loaded in the seventh.

Miguel Cabrera had three hits and reached four times. His tying single in the eighth off Miguel Castro gave him 3,036 career hits and pinch runner Kody Clemens gave Detroit a 4-3 lead when he scored on Javier Báez’s single under Rizzo’s glove.

Kyle Tucker had a solo homer and a key RBI single late in the game, and Yordan Alvarez added a home run and a triple and scored three runs as visiting Houston beat Kansas City in the rubber game of their three-game series.

Salvador Perez’s two-run home run to center pulled the Royals to within 3-2 in the sixth, and his RBI double in the eighth again cut it to 4-3. But Tucker, Yuli Gurriel and Jeremy Pena had two-out singles in the ninth inning that drove home Mauricio Dubon, Alvarez and Tucker, respectively, and provided the Astros a trio of insurance runs.

Framber Valdez (6-2) earned the win, allowing two runs on four hits in six innings while striking out five and walking three. Rafael Montero got the final out, coaxing a base-loaded groundout in the ninth, to garner his fourth save of the season.

Matt Olson broke a 3-3 tie with a three-run homer for the Braves in the second inning.

Atlanta starter Charlie Morton (4-3) allowed four runs and six hits in five innings. He struck out eight and walked three for the Braves, who have won five in a row.

Andres Gimenez hit a three-run homer in the first inning, and four Cleveland pitchers combined on a four-hitter in the victory over host Baltimore.

The Guardians won for the fifth time in their last six games.

The Orioles scored their runs in the fourth inning on Ryan Mountcastle’s two-run home run. Ryan McKenna had half of Baltimore’s hits with a single and a double as the Orioles have gone almost two weeks without consecutive victories.

Burger and Vaughn each had two doubles, while Burger knocked in two runs and Vaughn one. The White Sox, who had 16 hits, scored four runs in the first inning and two in the second to take a 6-0 lead and chase Tampa Bay starter Ryan Yarbrough (0-3) after 1 2/3 innings. Yarbrough gave up eight hits while walking two.

Isaac Paredes hit a leadoff home run in the fifth inning and the Rays scored four runs in the sixth, but Liam Hendriks pitched a perfect ninth for Chicago to post his 16th save of the year.

Bryson Stott hit a three-run homer off Jimmy Herget with two outs in the bottom of the ninth inning to lift host Philadelphia past Los Angeles.

Bryce Harper hit a grand slam, double and drove in four runs for the Phillies, who won their fourth in a row. Interim manager Rob Thomson has won all three games since replacing Joe Girardi.

Thompson (3-4) threw five scoreless innings, giving up four hits and no walks, with four strikeouts. Wil Crowe, Anthony Banda, Chris Stratton and David Bednar followed with an inning of relief each. Bednar pitched the ninth for his 10th save.

Steve Cishek escaped a scoreless ninth for his first save in two chances this season and his first since June 20, 2019, with the Chicago Cubs.

Hill (2-3), who had five strikeouts and no walks, was dominant in leading Boston to its fourth straight win, which pushed the Red Sox to .500 (27-27) for the first time since April 22. Rafael Devers, who finished 2-for-3 with two runs, two RBIs and a walk, hit a solo homer in the eighth.

Junis (3-1) allowed one run on two hits with two walks and a season-high eight strikeouts. Dominic Leone, Tyler Rogers and Camilo Doval each pitched a scoreless inning to secure the victory.

The Marlins scored their lone run on Garrett Cooper’s one-out solo homer in the sixth against Junis, who threw a season-high 96 pitches. Miami was limited to five hits and lost for the 11th time in its last 16 games.

Jake Cronenworth belted a three-run homer in the 10th inning to give visiting San Diego a victory over Milwaukee.

Jurickson Profar opened the 10th against Trevor Gott (1-1) with a single to right, sending runner Jose Azocar to third. Cronenworth then drove an 0-1 pitch 377 feet to right for his fifth homer.

Milwaukee got a run in the bottom half off Taylor Rogers on Andrew McCutchen’s RBI single. Rogers finished for his 18th save.

Eugenio Suarez drove in four runs to help force extra innings and Seattle capitalized on a wild pitch in the 10th to edge Texas in Arlington.

In the 10th, Abraham Toro started off the inning at second base, and after advancing to third on Dylan Moore’s groundout to second, Brock Burke (3-1) threw a wild pitch that deflected off catcher Jonah Heim’s glove. Toro scored easily with the decisive run.

After both teams failed to score in the 10th, Yepez, who has 11 RBIs in 30 major league games, opened the 11th with a run-scoring single off Daniel Norris (0-4). Fellow rookie Brendan Donovan (two hits) added an RBI double later in the frame for St. Louis, which took three of five during this weekend set.

Starters Adam Wainwright of St. Louis and Chicago’s Justin Steele were solid, each going seven innings. It was a career-long for Steele, who yielded two runs — one earned — with seven hits and three walks. Wainwright also gave up two runs, plus nine hits and two walks without a strikeout.