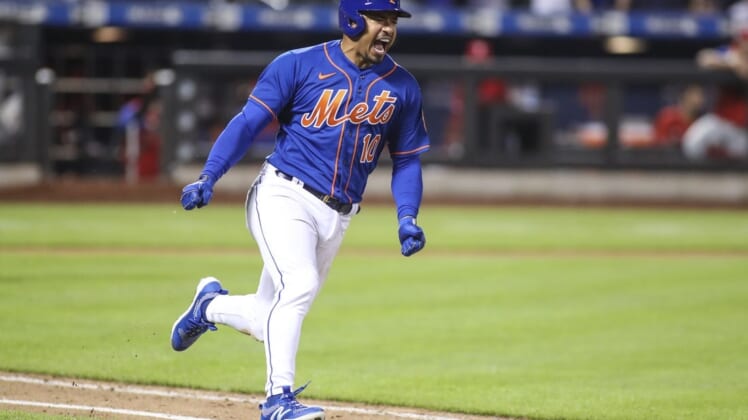 Eduardo Escobar laced the game-winning RBI double in the bottom of the 10th inning for the host New York Mets, who overcame a ninth-inning deficit to beat the Philadelphia Phillies 5-4 and complete a three-game sweep.

The Phillies took a 4-3 lead in the eighth, when Nick Castellanos hit a long homer to left. But the Mets tied it on the first pitch of the ninth, when Nick Plummer homered into the right field seats off Corey Knebel for his first career hit.

Edwin Diaz (2-1) tossed a hitless 10th — Escobar made a snow-cone catch while reaching over the dugout railing to record the first out on Kyle Schwarber’s pop-up — before Knebel (1-4) struck out Francisco Lindor to open the bottom half of the inning. Pete Alonso was intentionally walked before Escobar hit the next pitch into right field to easily score automatic runner Starling Marte.

The Mets, who are 12-2-1 in 15 series this season, hold an 8 1/2-game lead over the second-place Atlanta Braves in the National League East — New York’s biggest division lead at Memorial Day in franchise history.

Trailing 2-1 with two outs in the eighth, Longoria drove a fastball from reliever Art Warren to the seats in right-center as the Giants salvaged the final game of the three-game series. Longoria also made a leaping defensive stab of a line drive to minimize a Reds threat and threw out a runner at the plate to help the Giants win for just the third time in 10 games and the first time on a 10-game road trip.

Albert Almora Jr. homered and finished with three RBIs for the Reds, who had their season-high four-game win streak snapped.

Marcell Ozuna had his second two-homer game of the season and Max Fried pitched six strong innings to help Atlanta defeat visiting Miami in the rubber game of their three-game series.

Ozuna homered in the first inning and again in the third inning, giving him 10 for the season. It was the 12th multi-homer game of his career. Fried allowed one run on six hits, three walks and five strikeouts. It was his fourth straight win.

The Marlins wasted two home runs from Jorge Soler, who hit his 10th and 11th of the season. Soler has 10 career multi-home run games.

Boston hit a season-high five home runs and banged out 15 total hits on its way to a home win over Baltimore.

Baltimore’s Trey Mancini went 3-for-3 with an RBI while Jorge Mateo finished 2-for-4 from the No. 9 hole. The duo combined for five of the team’s seven hits.

Choi and Walls went deep in the second and fifth innings, respectively, off Yankees starter Luis Severino (3-1) to put the Rays ahead 2-1. Without the benefit of a hit, the Rays used four walks and a hit batsman to add two more tallies to make it 4-1 in the seventh, with pinch hitter Harold Ramirez (walk) and Mike Zunino (hit by pitch) earning RBIs.

Rays starter Shane McClanahan (5-2) allowed only one run and scattered seven hits, and his seven strikeouts increased his major-league-leading total to 81. Gleyber Torres and Aaron Judge hit solo home runs for the Yankees.

Cesar Hernandez and Victor Robles also had two hits apiece, starter Josiah Gray (5-4) allowed a run on three hits in five innings and Tanner Rainey got the final five outs for his fifth save for Washington.

Charlie Blackmon homered and Brendan Rodgers and Sam Hilliard had two hits each for Colorado. Rockies starter Kyle Freeland (1-5) left the game in the sixth inning with an apparent left leg injury.

The Tigers’ Elvin Rodriguez, making his second career start, gave up just two hits in four innings before departing with lower body cramping. Alex Lange (2-1) got four outs and was credited with the victory.

Guardians starter Triston McKenzie (3-4) pitched 7 2/3 innings, allowing two runs on four hits. He walked one and struck out eight. Andres Gimenez scored the only Guardians run and Owen Miller was the only player on either team with more than one hit.

Burnes (3-2) struck out 11 batters and walked only one. Hoby Milner and Brent Suter pitched a scoreless inning each to complete the shutout.

Gio Urshela, Nick Gordon and Trevor Larnach each homered and Minnesota held on for a win over visiting Kansas City in Minneapolis.

Kyle Garlick also drove in a run for Minnesota, which salvaged a split in the four-game series. Twins right-hander Sonny Gray (3-1) limited the Royals to one run on two hits in six innings to earn his third victory in a row. He walked none and struck out four.

A walk-off RBI single from Jake Burger in the bottom of the 12th inning gave the Chicago White Sox their victory over the visiting Chicago Cubs, splitting the two-game series and finishing 3-1 in 2022 against their hometown rival.

Effective pitching from both starting pitchers prevented any runs scored until the seventh inning. Both pitched for seven innings, the Cubs’ Marcus Stroman (2-4) allowing three hits, walking two and striking out two, and the White Sox’s Dylan Cease (4-2) yielding an unearned run, two hits, four walks and striking out five.

The White Sox’s Tim Anderson had to be helped off the field in the top of the fifth after suffering a strained right groin while fielding a grounder and throwing out P.J. Higgins. Anderson will be evaluated further on Monday.

After a back-and-forth battle with ties at four points in the game, Lourdes Gurriel Jr. hit the go-ahead RBI double to give Toronto the four-game sweep over Los Angeles.

Five Blue Jays batters had two hits, including Gurriel, who doubled twice and drew two bases-loaded walks. The Angels hit four home runs, including two from Shohei Ohtani, who was hitless in the first three games of the series.

David Phelps, the last of seven Blue Jays pitchers, threw a scoreless ninth for his first save of the season. Adam Cimber (6-2) got two outs in the seventh inning to get the victory over Quijada (0-1).

Jed Lowrie’s two-out single in the bottom of the ninth drove home Cristian Pache with the winning run as host Oakland roared back to beat error-prone Texas and salvage the finale of a four-game series between the AL West rivals.

Lowrie’s hit off the Rangers’ Brett Martin (0-4) made a winner out of closer Dany Jimenez (2-2) after he had allowed Texas to tie the game in the top of the ninth on a wild pitch.

Texas committed a season-high five errors in the game. Brad Miller homered and drove in two runs for the Rangers, and Corey Seager also went deep. Lowrie was among five Oakland players to finish with two hits.

Trent Grisham hit a walk-off, two-run homer leading off the bottom of the 10th against Pittsburgh reliever Chris Stratton to give San Diego a victory in the rubber-match of a three-game series.

The Padres went up 2-0 in the fifth due to a two-run homer by Jurickson Profar, but that lead was erased in the eighth inning with a RBI double by Ke’Bryan Hayes and a RBI single from Josh VanMeter.

Yordan Alvarez lined a run-scoring single to the opposite field with two outs and the bases loaded in the eighth inning to break a tie and give Houston a victory against host Seattle.

Ryan Pressly got out of a bases-loaded jam in the ninth inning to earn his eighth save of the season, inducing Luis Torrens to ground into a game-ending double play.

Jeremy Pena homered in the second inning as Houston salvaged the finale of the three-game series after losing by scores of 6-1 and 6-0.

Anderson allowed five hits with one walk and six strikeouts and ran his scoreless streak to 20 innings. Craig Kimbrel allowed a run in the ninth before striking out Cooper Hummel with a runner at third for his 10th save.

The Dodgers have won four straight series and 13 of their past 15 games. Los Angeles also improved to 25-5 against the D-backs over the past two seasons, including eight straight wins.