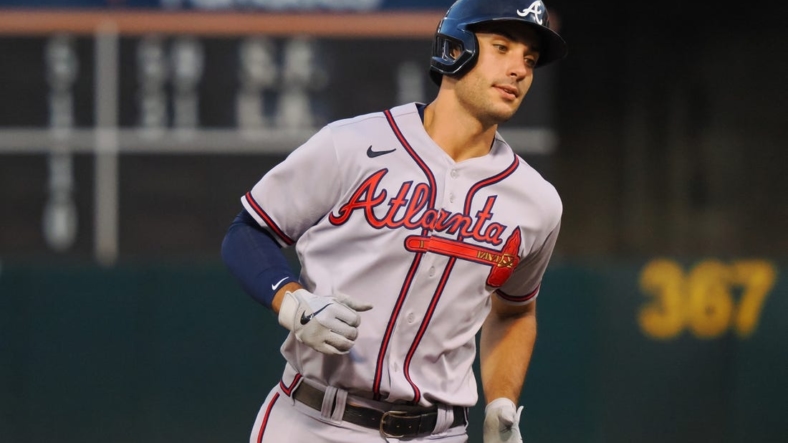 Matt Olson homered in his homecoming and the visiting Atlanta Braves overcame a rare poor effort by Kyle Wright to outlast the Oakland Athletics 10-9 in the opener of a two-game interleague series Tuesday night.

Playing in Oakland for the first time since getting traded in March, Olson hit a three-run homer in the third and the Braves led almost the whole way. Atlanta also scored three times in the first and fifth innings en route to a sixth consecutive victory.

Oakland fell for a fifth time in its past six games despite hitting three homers — back-to-back shots by Sean Murphy and Seth Brown in a four-run third and a three-run blast by pinch hitter Chad Pinder that drew the hosts to a 9-9 tie in the fifth after they had trailed by as many as five runs.

Jesse Chavez (3-1), Raisel Iglesias, A.J. Minter and Kenley Jansen held the A’s scoreless over the final four innings on just one hit. Jansen worked a 1-2-3 ninth with two strikeouts for his 32nd save.

Alfaro hit a two-run single off Ian Kennedy (4-7) with two outs in the ninth as the Padres snapped a three-game losing streak. The Padres got home runs from Jake Cronenworth, Ha-Seong Kim and Josh Bell.

Magneuris Sierra laid down a perfect safety-squeeze bunt to score Andrew Velazquez from third base in the 10th inning, lifting Los Angeles over Detroit in Anaheim, Calif.

The Tigers took a 4-3 lead in the top of the 10th on an RBI single by Javier Baez, who drove in three runs on the night. However, Baez’s throwing error in the bottom of the 10th allowed the Angels’ Taylor Ward to tie the game at 4-4. Velazquez took third on a wild pitch and scored on Sierra’s bunt single.

Mike Trout, Mike Ford and Jo Adell homered for the Angels. Trout has gone deep in three consecutive games and has seven homers in his past 13 games.

Randal Grichuk hit two homers, including a three-run, walk-off shot in the 10th inning, and Colorado rallied to beat Milwaukee in Denver.

Elehuris Montero and Yonathan Daza homered and had two hits each while Alan Trejo added three hits for Colorado. Daniel Bard (4-4) pitched two innings and got the win despite giving up a run in the top of the 10th.

Christian Yelich homered and singled, Hunter Renfroe also went deep and Willy Adames had three hits and two RBIs for the Brewers, who lost for the fourth time in six games.

Cal Raleigh hit a two-run homer with two outs in the eighth inning off Reynaldo Lopez to provide some insurance for the Mariners, who won for the eighth time in nine games. Gilbert (12-5) gave up five hits and didn’t walk a batter.

The White Sox, without manager Tony La Russa while on an indefinite leave because of health issues, lost for just the second time in the past seven games. Johnny Cueto (7-7) allowed one run on five hits in six-plus innings.

Muncy went 3-for-4 and scored three times and Tyler Anderson pitched seven innings of three-run ball as the Dodgers beat the Giants for the ninth time in the past 10 meetings.

Lewis Brinson and Brandon Crawford homered for the Giants, who had a four-game winning streak halted.

Bo Bichette homered for the fourth time in two games and Matt Chapman had two run-scoring hits for the Blue Jays. Bichette and Alejandro Kirk both went 4-for-5 for Toronto, which had a five-game winning streak end.

Nolan Gorman hit a homer and an RBI double to power St. Louis past visiting Washington.

Texas cashed in on a couple of breaks, including Corey Seager scoring on Framber Valdez’s wild pitch in the seventh inning, while edging host Houston.

Rangers reliever Jose Leclerc stranded Jose Altuve at second base in the ninth inning to record his third save. Taylor Hearn (6-7) picked up the win with two scoreless innings out of the bullpen.

Although Valdez (14-5) took the loss, the left-hander did extend his quality start streak to 23 games, one shy of Jacob deGrom’s major league record within a single season. deGrom set the mark with the New York Mets in 2018.

Edmundo Sosa hit a solo home run and a double and Alec Bohm had a sacrifice fly and an RBI for the Phillies, who snapped a three-game losing streak. Aaron Nola struck out 10 over 6 2/3 innings, reaching 200 strikeouts for the fourth time in his career.

Brandon Nimmo homered for the Mets, who have lost three straight. Mets right fielder Starling Marte left in the second, an inning after he got hit by a pitch on the right hand. New York starter Taijuan Walker (10-4) gave up four runs in five innings.

Bieber (9-8) allowed a solo home run to Salvador Perez but only three other hits and one walk while striking out seven. He has a 1.79 ERA in his past eight starts, with 61 strikeouts and eight walks in 55 1/3 innings.

James Karinchak fanned two in a perfect ninth inning for his first save. Cleveland’s Jose Ramirez hit a two-run single. The loss guaranteed that the Royals will finish with a losing record for the sixth straight season.

Nick Madrigal delivered a tiebreaking, two-run single in the sixth and Hayden Wesneski threw five scoreless innings of relief in his major league debut as Chicago snapped a three-game skid with a victory over visiting Cincinnati.

Seiya Suzuki clubbed a tying two-run homer in the fifth and had three RBIs, while Ian Happ also went deep for the Cubs. Wesneski (1-0) allowed two hits and one walk while striking out eight.

Kyle Farmer tripled, homered and drove in three runs for the Reds. Ian Gibaut (1-1) took the loss in relief.