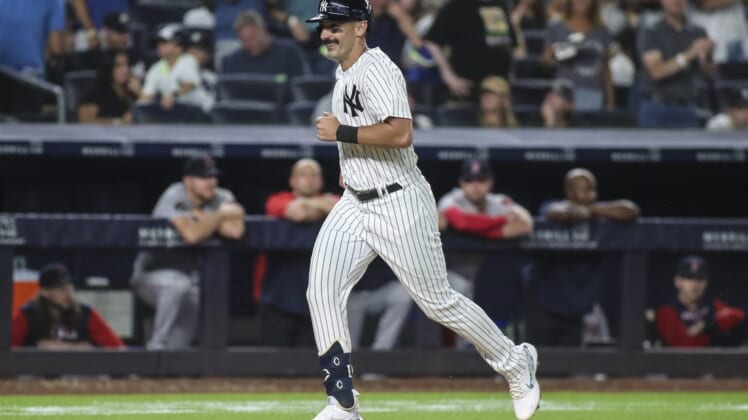 Matt Carpenter hit a three-run homer in the first inning, another three-run shot in the fifth that earned him a curtain call, and drove in seven runs as the host New York Yankees cruised to a 14-1 rout of the Boston Red Sox.

Aaron Judge homered twice, extending his major league lead to 33. Carpenter appeared in his 30th game since joining the Yankees on May 26 and in his 72nd at-bat, he slugged a 1-1 curveball from Boston starter Nick Pivetta (8-7) into the right field seats for his 12th homer.

After striking out in the third, Carpenter lifted an 0-2 slider from left-hander Darwinzon Hernandez into the first few rows of the right field seats in the fifth.

Yankees starter Jameson Taillon (10-2) allowed one run on two hits to go along with five strikeouts in six innings. Rafael Devers homered for the third straight game, but the Red Sox were held to three hits.

J.P. Crawford delivered an RBI single in the 10th inning as Seattle won its 13th straight game by beating Texas in Arlington, Texas. The Mariners are two victories shy of matching their longest winning streak in franchise history, set in the 2001 season.
Carlos Santana slammed a two-run homer, Ty France had three hits, while Crawford — who had missed the two previous games with a bruised right index finger — delivered two hits for the Mariners, as did Adam Frazier.

Seattle starter Logan Gilbert allowed one run and four hits in five innings. He struck out four and didn’t walk a batter on 85 pitches.

Sam Haggerty started the 10th inning on second base as a pinch runner for Santana against Brett Martin (0-5). Haggerty stole third and scored on Crawford’s ground ball single down the first-base line for the 3-2 lead.

Verlander (12-3) produced his sixth scoreless outing in 17 starts this season, winning his fourth consecutive start by limiting the Athletics to six hits while recording 10 strikeouts over six innings.

It marked just the second double-digit strikeout performance of the season for Verlander, who moved past Curt Schilling and Hall of Famer Bob Gibson into 14th place on the career list with 3,121 strikeouts. Verlander fanned at least one batter in every inning, excluding the fifth.

Luis Arraez also homered for the Twins, and Correa and Polanco each finished with two hits as Minnesota improved to 6-3 against the White Sox this season.

Dylan Bundy (6-4) picked up the win, allowing three runs on five hits over 5 1/3 innings. He walked one and struck out three while improving to 6-0 in nine career appearances (eight starts) against the White Sox. Chicago had a four-game winning streak snapped.

Goldschmidt became the 10th active player in the majors to reach that plateau.

Lars Nootbaar hit a three-run homer for the Cardinals and Edmundo Sosa drove in two runs before departing in the eighth inning after crashing into the side wall while chasing a pop-up and injuring his lower leg. Albert Pujols scored twice and moved past Lou Gehrig for 12th place all-time with 1,889 career runs.

Pete Alonso hit a tiebreaking sacrifice fly the 11th inning and visiting New York beat Chicago in the opener of a day-night doubleheader.

New York won for the 10th time in 15 games, handed Chicago its eighth straight loss, and improved to 8-1 in extra innings by scoring against Mychal Givens (5-1).

New York scored two runs in the top of the 10th without hitting the ball out of the infield before holding off host Chicago in the bottom half of the inning to earn a doubleheader sweep of the Cubs.

Mets starter Max Scherzer allowed two runs on eight hits and one walk while striking out 11 over 6 1/3 innings. The 11 strikeouts tied his season high; he also fanned 11 against the Cincinnati Reds on July 5.

Cubs starter Drew Smyly allowed two runs (one earned) on five hits. He walked one and fanned four in 4 1/3 innings.

Urena (1-1) gave up five hits, struck out four and walked two before exiting after the sixth. Daniel Bard got the final three outs to earn his 20th save for the Rockies, who have won five straight and eight of their last 10. It is their longest winning streak of the season.

Ben Gamel had two hits for Pittsburgh, which has lost four in a row. Mitch Keller (3-7) took the hard-luck loss despite giving up one unearned run. He struck out six, walked two and allowed five hits in six innings of work.

Teoscar Hernandez capped a three-run rally in the bottom of the 10th inning with an RBI single to lift Toronto to a 6-5 win over visiting Kansas City.

Vladimir Guerrero Jr. doubled against Joel Payamps (2-3) to score automatic runner George Springer in the bottom of the 10th. Pinch hitter Raimel Tapia tied the game with an RBI single. Bo Bichette then singled, and Hernandez won the game with a sharp ground-ball single to left.

Vinnie Pasquantino had hit a two-run homer with two outs in the top of the 10th against Jordan Romano (3-2) to give the Royals a 5-3 lead.

The Braves have won the first three games of the series, with Sunday’s matchup the last game before the All-Star break. Atlanta has won seven of its last nine, with six coming against the Nationals.

Washington’s losing streak has reached nine games. The Nationals have lost 15 of their last 16 games to mark the worst stretch in team history. Braves starter Max Fried (10-3) went seven innings, giving up three runs on seven hits with four strikeouts and no walks.

Quantrill (6-5) surrendered four hits, no runs and two walks while striking out five in winning his second consecutive start before the All-Star break. He is 10-0 lifetime at Progressive Field.

Mountcastle’s single drove in Jorge Mateo, who had tripled, and Cedric Mullins, who had walked.

In a dramatic finish that featured several lead changes, Mountcastle wasn’t the only one who came through in the clutch for the Orioles. Adley Rutschman, who entered the game in the eighth inning, made two big plays with his bat and one with his arm after taking over behind the plate.

J.T. Realmuto and Rhys Hoskins homered against rookie Max Meyer, who was making his major league debut, as Philadelphia defeated host Miami.
Meyer (0-1) allowed seven hits, one walk and five runs in 5 1/3 innings. Meyer, the third overall pick in the 2020 draft, struck out five batters as his parents and other family members and friends watched from the stands.

Didi Gregorius and Kyle Schwarber homered off Miami’s bullpen. Gregorius finished the day 2-for-4 with a game-high four RBIs. Schwarber leads the National League with 29 homers. Ranger Suarez (7-5), who hadn’t pitched since June 29, earned the win, allowing four hits and no walks in five innings. He struck out four.

Wilmer Flores was awarded home plate on a two-out balk called on Milwaukee reliever Jandel Gustave in the eighth inning, giving host San Francisco what turned out to be the game-winning run.

Reliever John Brebbia (5-1), who got out of a jam in the top of the eighth when Jonathan Davis was thrown out stealing third base for the final out, was credited with the win. Dominic Leone, whose errant pickoff throw had put Willy Adames on second base with no outs in the ninth, retired the final three batters he faced for his second save.

Luke Voit erased a two-run Arizona lead with a three-run homer off reliever Noe Ramirez in the sixth inning to lead host San Diego past the Diamondbacks.

The Padres have won the first two games of the series and are 9-2 against the Diamondbacks this season. Sean Manaea (5-4) gave up three runs on seven hits and two walks with three strikeouts in six innings to earn the win. Taylor Rogers earned his 26th save with two strikeouts in a perfect ninth.

Arizona starter Tyler Gilbert allowed three runs on five hits and a walk with a strikeout in five-plus innings. Ramirez (2-3) took the loss.