The Los Angeles Angels hit five home runs and got an impressive performance from starting pitcher Andrew Heaney on the way to an 8-1 victory over the Kansas City Royals on Tuesday night in Anaheim, Calif.

Ohtani hit his 17th home run of the season, one behind major league leaders Vladimir Guerrero Jr. and Ronald Acuna Jr. The homer also was the longest of Ohtani’s career, estimated at 470 feet.

Ohtani, Stassi and Ward each drove in two runs.

The Giants trailed 4-2 with two outs in the eighth before Tauchman broke a 2-for-25 slump with his line-drive homer down the right-field line off Josh Sborz. Crawford added a three-run blast in the ninth off Taylor Hearn for the fifth multi-homer game of his career. LaMonte Wade Jr. had three hits and Jose Alvarez (2-1) earned the victory in relief for the Giants, who won for the eighth time in their last 10 games.

Isiah Kiner-Falefa had three hits and Nick Solak drove in two runs for the Rangers, who were out-hit 12-8 and lost for the 12th time in their last 13 games.

Willson Contreras and Patrick Wisdom also went deep for Chicago, which has hit at least one homer in each of its past nine games, belting 18 long balls in that span.

Ramirez hit a three-run homer, an RBI grounder, a double and a single to extend his on-base streak to 22 games. During that run he has produced 10 walks, nine doubles, three homers, 17 runs and 13 RBIs.

Shane Bieber (7-3) held the Cardinals to one run on five hits in six innings as the Indians won for the fourth time in their last six games. The slumping Cardinals have lost six consecutive games and eight of their last nine.

Carlos Correa homered among three hits to lead visiting Houston to a rout of Boston in the opener of a three-game series.

Yuli Gurriel also had three hits, and Correa, Yordan Alvarez and Martin Maldonado each drove in two runs as the Astros won for the seventh time in nine games. Framber Valdez (2-0) gave up one run on five hits in 7 1/3 innings. He struck out eight without issuing a walk.

Mookie Betts added an RBI triple, AJ Pollock an RBI double and Max Muncy an RBI single for the Dodgers. Buehler (5-0) gave up only two hits, walked one and struck out two. Kenley Jansen got the final out for his 13th save.

For the Pirates, Bryan Reynolds and Michael Perez homered, and Adam Frazier hit an RBI double. The Pirates thought they had a 1-0 lead in the first. With one out, Ke’Bryan Hayes hit a shot to right off the foul pole for an apparent home run, but the Dodgers successfully challenged that he did not touch first base, and he was out.

Oakland parlayed four singles, three walks and an infield out into five fourth-inning runs and right-hander Chris Bassitt took advantage of a nice cushion to coast to his sixth straight win in an interleague victory over visiting Arizona.

Pinch-hitter Chad Pinder and Matt Chapman drove in runs with singles, while Sean Murphy and Elvis Andrus forced home others with bases-loaded walks in the fourth-inning uprising that propelled the American League-leading A’s to their fifth win in their last six games.

Christian Walker homered for the Diamondbacks, who dropped their franchise-record 18th straight on the road.

Gary Sanchez and Miguel Andujar homered and New York took advantage of four Minnesota errors to snap a four-game losing streak with a victory in Minneapolis.

DJ LeMahieu, Gleyber Torres, Giancarlo Stanton, Sanchez and Andujar each had two hits and Andujar also scored three times for the Yankees. Jonathan Loaisiga (5-2) picked up the win in relief.

Anthony Santander had a solo home run, and Pat Valaika had two doubles and three RBIs for Baltimore, which has won five of six. Freddy Galvis had three hits and two runs scored.

Pete Alonso homered twice for the Mets, who managed four hits, just two after the first inning. Mets starter David Peterson (1-5) could not make it past the third, departing after allowing four runs on eight hits in 2 2/3 innings.

Pablo Lopez pitched a career-high eight innings, striking out eight batters and leading host Miami to a win over Colorado.

Miami’s Corey Dickerson, Jesus Aguilar and Adam Duvall each had two RBIs. Starling Marte went 3-for-4 for the Marlins, who earned just their second win in 11 games.

Charlie Blackmon went 2-for-3 to pass Larry Walker for second place on Colorado’s all-time hit list. Blackmon has 1,362 hits, one more than Walker. Despite the milestone for Blackmon, Colorado is now 4-23 away from home, the worst road record in the majors.

Tyler Glasnow struck out 11 over seven innings to lead Tampa Bay to a win over Washington in St. Petersburg, Fla.

Glasnow (5-2) allowed one run on six hits and walked one while helping the Rays win their third in a row and fourth in the past five games. Tampa Bay has won nine of its past 10 at Tropicana Field.

Manuel Margot led off the game with a 419-foot homer to left-center off Nationals starter Jon Lester. Diego Castillo worked a perfect ninth inning to lock up his 10th save. Washington lost its third consecutive game.

Avisail Garcia led off the fourth inning with a homer and added an RBI single in the seventh to lift visiting Milwaukee to a victory over Cincinnati.

Milwaukee’s Travis Shaw made a stellar defensive play at third base to end the sixth inning and added a two-run double in the ninth. Adrian Houser (4-5) allowed one run on five hits in 5 1/3 innings for the Brewers, who have won five in a row and 10 of their past 11 games.

Shogo Akiyama had an RBI single in the second inning for the Reds, who saw their four-game winning streak come to a halt.

Andrew Vaughn hit a game-tying home run in the seventh inning and added the go-ahead sacrifice fly in a five-run eighth as Chicago defeated visiting Toronto.

Pinch hitter Adam Eaton had an RBI single, Leury Garcia hit a two-run triple and Tim Anderson contributed a sacrifice fly in the eighth. Garrett Crochet (2-2) pitched a perfect eighth with two strikeouts to earn the win in the opener of a three-game series.

Toronto left-hander Robbie Ray allowed one run on five hits and no walks while striking out a season-best 13 in 6 1/3 innings.

Ronald Acuna Jr. went 3-for-4 with three RBIs and tied for the major league lead with his 18th homer as Atlanta rallied for a win at Philadelphia.

William Contreras and Austin Riley also collected three hits and homered for the Braves. Riley tied the game in the eighth with his 11th homer of the year, and Contreras snapped a 5-5 deadlock with an RBI single off reliever Sam Coonrod.

Sean Newcomb (2-0) picked up the win by working a scoreless seventh inning. Bryce Harper and J.T. Realmuto homered for the Phillies.

Boyd (3-6) allowed only an unearned run in six innings. Robbie Grossman had two doubles and scored a run, while Derek Hill supplied two hits, a run scored and an RBI. Miguel Cabrera drove in the other Tigers run in the opener of a three-game series.

Taylor Trammell had two hits and an RBI for Seattle and J.P. Crawford reached base four times. Marco Gonzales (1-4) gave up four runs on five hits in four innings. 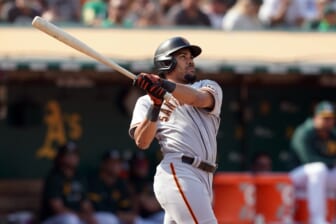