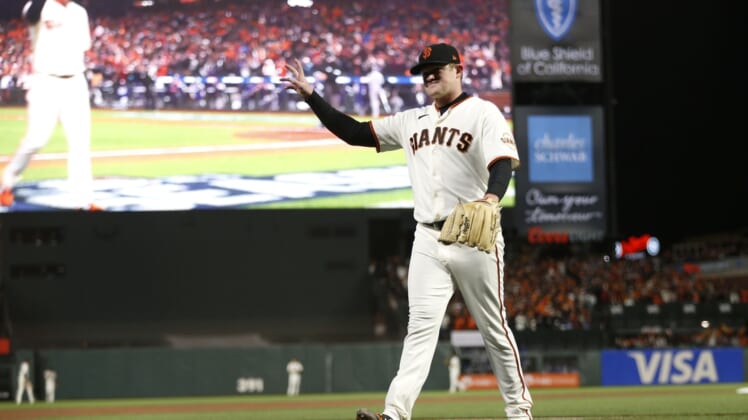 Logan Webb made a splashy postseason debut Friday night, striking out 10 in 7 2/3 innings and leading the host San Francisco Giants to a 4-0 victory over the Los Angeles Dodgers in Game 1 of the National League Division Series.

Buster Posey hit a two-run home run in the first inning and Kris Bryant and Brandon Crawford added solo shots for the Giants, whose 107-win regular season earned them the home-field advantage in the best-of-five series against the 106-win Dodgers.

Webb (1-0), who went unbeaten in his last 20 regular-season starts, limited the Dodgers to five hits in his longest outing of the season. He did not walk a batter.

Dodgers starter Walker Buehler gave up three runs on six hits and a walk in 6 1/3 innings. He struck out five. Will Smith and Mookie Betts collected two hits apiece for the Dodgers.

Yordan Alvarez delivered the go-ahead RBI single and Kyle Tucker hit a two-run homer to cap a five-run seventh inning for host Houston, which beat Chicago to take a 2-0 lead in the American League Division Series.

Only 10 baseball teams have come back from an 0-2 deficit to win a best-of-five series. Tucker drove in three runs, and Yuli Gurriel and Jose Correa knocked in two apiece for the Astros.

Tim Anderson and Luis Roberts each had three hits for the White Sox. Winning pitcher Ryne Stanek (1-0) dodged a walk and a single in a scoreless seventh inning. Losing pitcher Aaron Bummer (0-1) gave up three runs on three hits in one-third of an inning.

J.D. Martinez hit a tiebreaking three-run homer in the fifth inning and collected four hits in his return to action as Boston routed Tampa Bay in Game 2 of the American League Division Series in St. Petersburg, Fla.

The Red Sox leveled the series at a game apiece behind 20 hits, including five from Enrique Hernandez, tying the all-time postseason record.

Rowdy Tellez snapped a scoreless tie with a two-run home run in the seventh inning to lift host Milwaukee over Atlanta in the first game of their National League Division Series.

Braves starter Charlie Morton (0-1), who had allowed just two hits through six innings, hit Avisail Garcia with a pitch to open the seventh. Tellez, who was on the injured list from Sept. 12-Oct. 1 with a right patellar strain, then drove a 1-2 pitch 411 feet to right-center.

Pinch hitter Joc Pederson brought the Braves within 2-1 with an opposite-field homer to left with two outs in the eighth off Adrian Houser, who had retired the first five hitters he faced. Houser (1-0) got the victory after starter Corbin Burnes pitched six scoreless innings, allowing two hits and three walks while striking out six.